Keeping up the tradition of never checking the weather forecast, I headed to the California Coast.  I was planning to drive down Highway 1 for over 600 miles, from Crescent City to Cambria.

When I arrived in Crescent City I heard that a massive storm was headed towards the coast.  According to the reports, a remnant of Typhoon Songda was set to pummel the West Coast with heavy rains and wind.  Instead of heading into the Redwoods, I figured I would be better off waiting out the storm in the city.  For the next 4 days I was stuck either in the library or my car.  Thankfully I found a parking lot near the library with free Wi-Fi.  At least I was able to watch YouTube videos for hours on end.

As the storm increased in intensity, things got interesting.  My car began to rock back and forth from the extreme winds, while the rain pelted the car.  Well, no need to go to a car wash now.  I spent at least 16 hours a day, for 4 days, stuck in my car.  With less than 3 weeks left on the trip, each day lost was a massive blow.

On the plus side, I made it through the On Cinema at the Cinema web-series, one of the best shows I've ever watched.  I had gotten addicted to it, as it provided a small glimmer of entertainment while I was confined in my car for what felt like an eternity.  I then had the idea of visiting Victorville, California, only 800 miles away...

Finally, after 4 days of nonstop rain and wind, the sun came out.  I left Crescent City by 6am and began the drive to Redwood National Park.  Thankfully I was the first person there, and I had the whole park to myself. 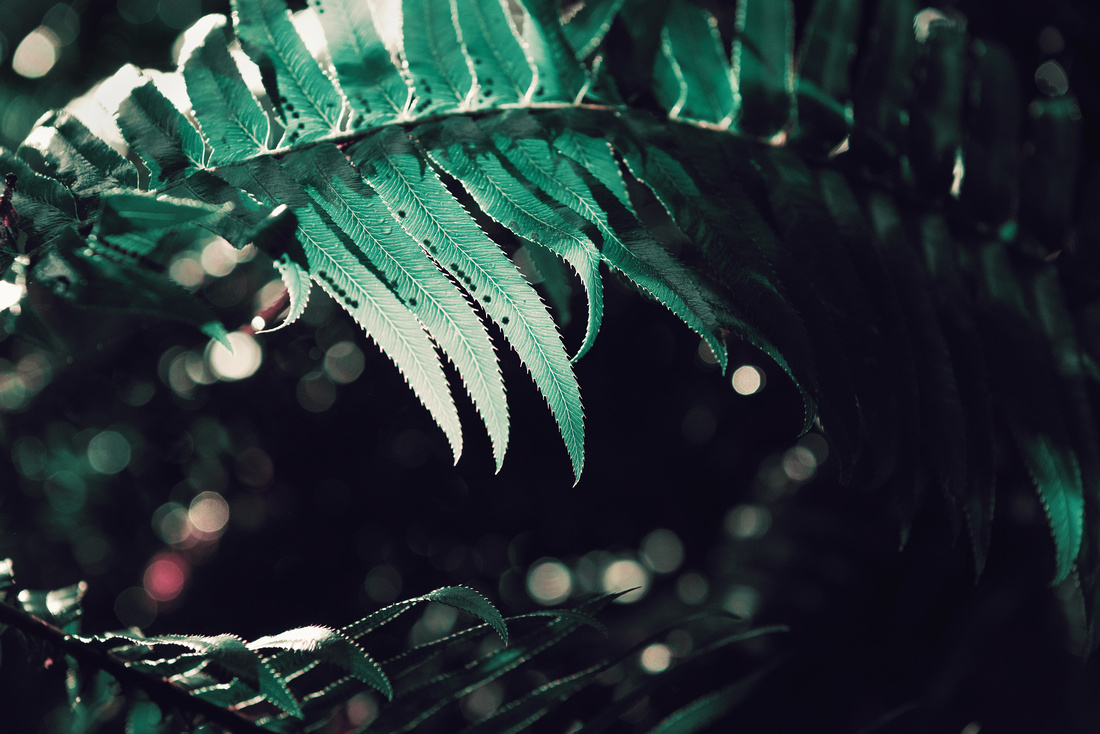 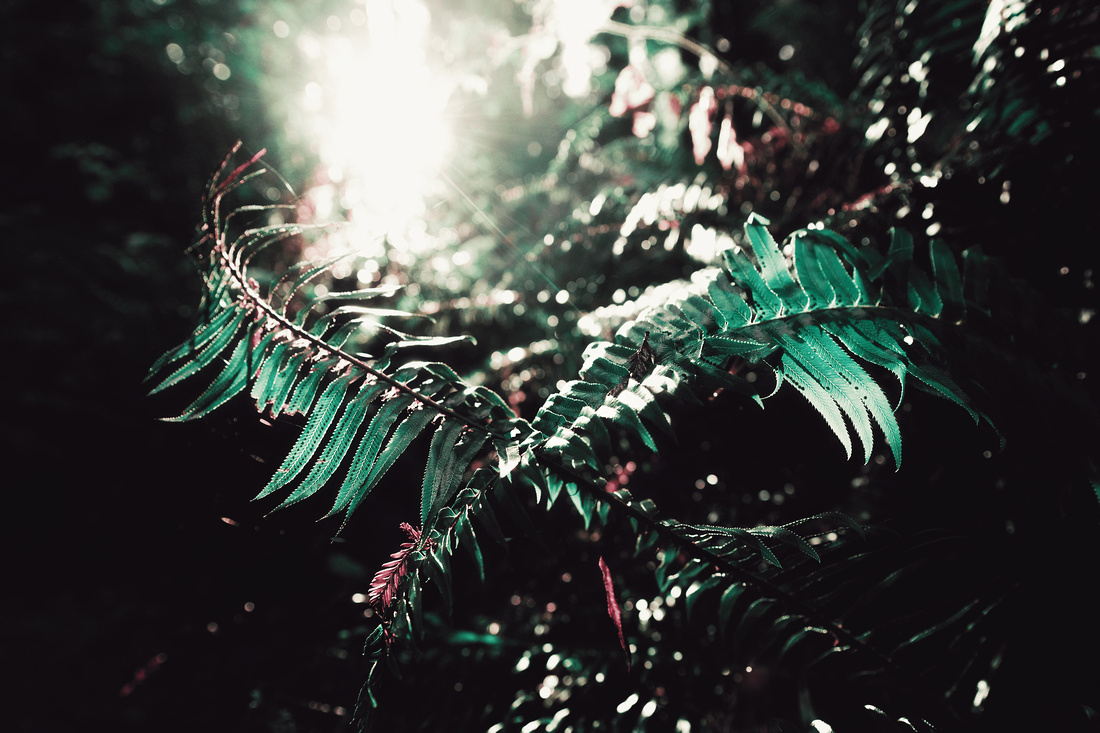 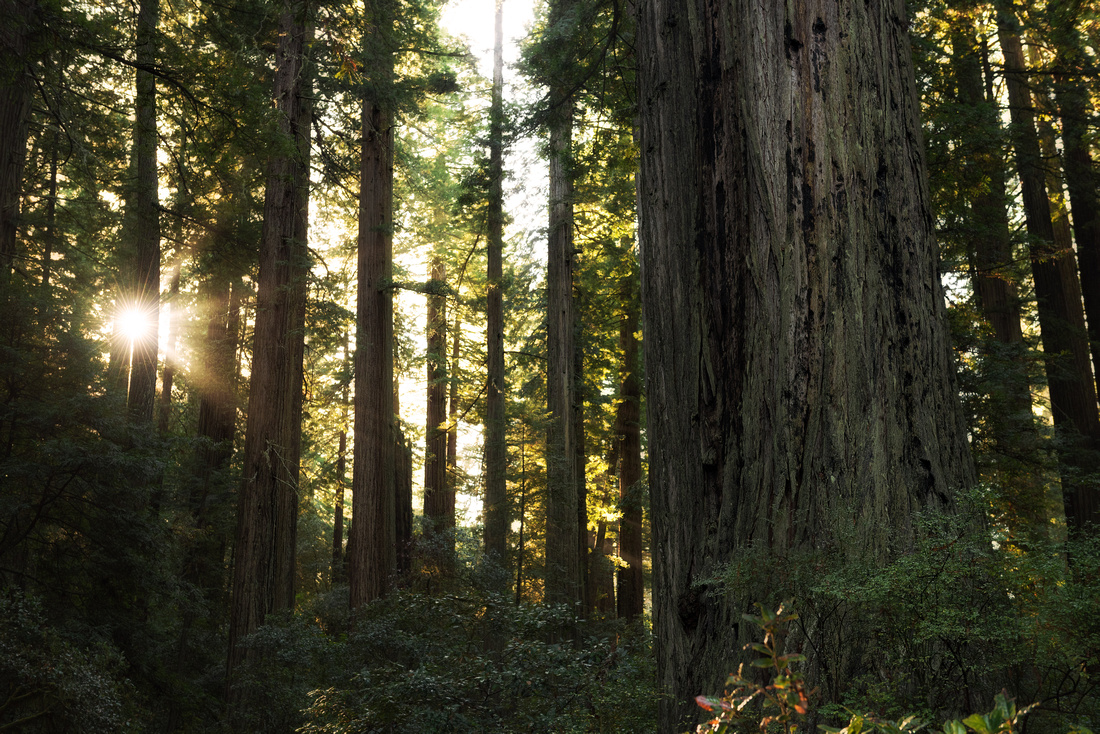 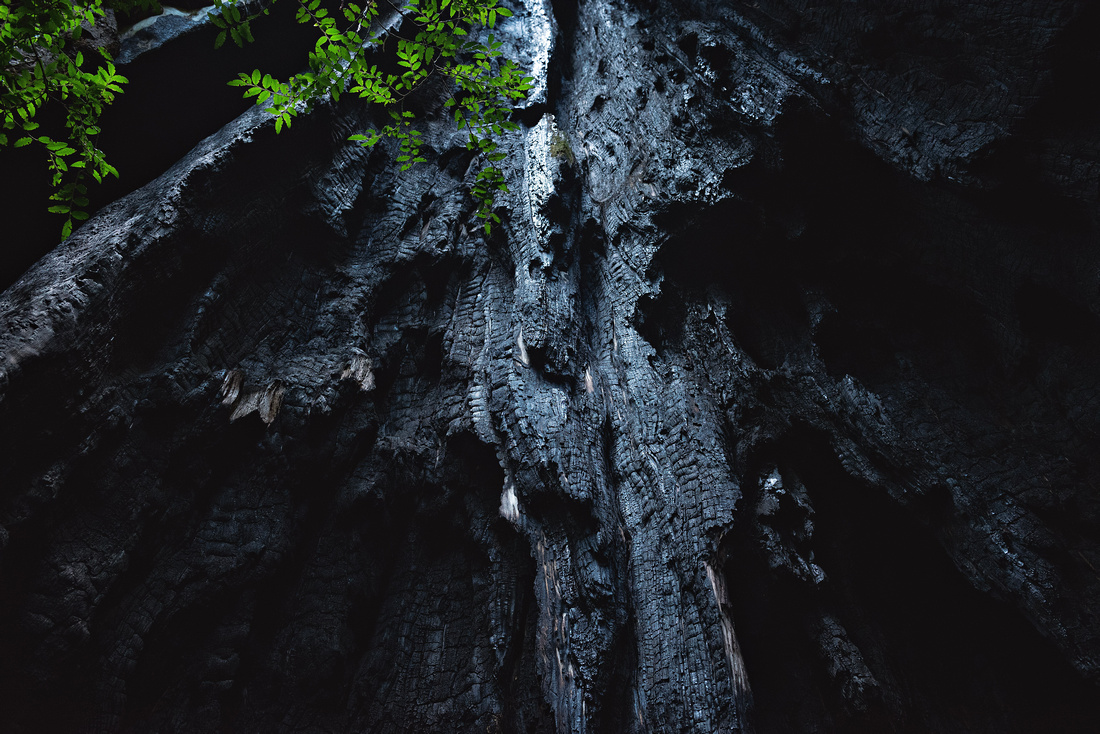 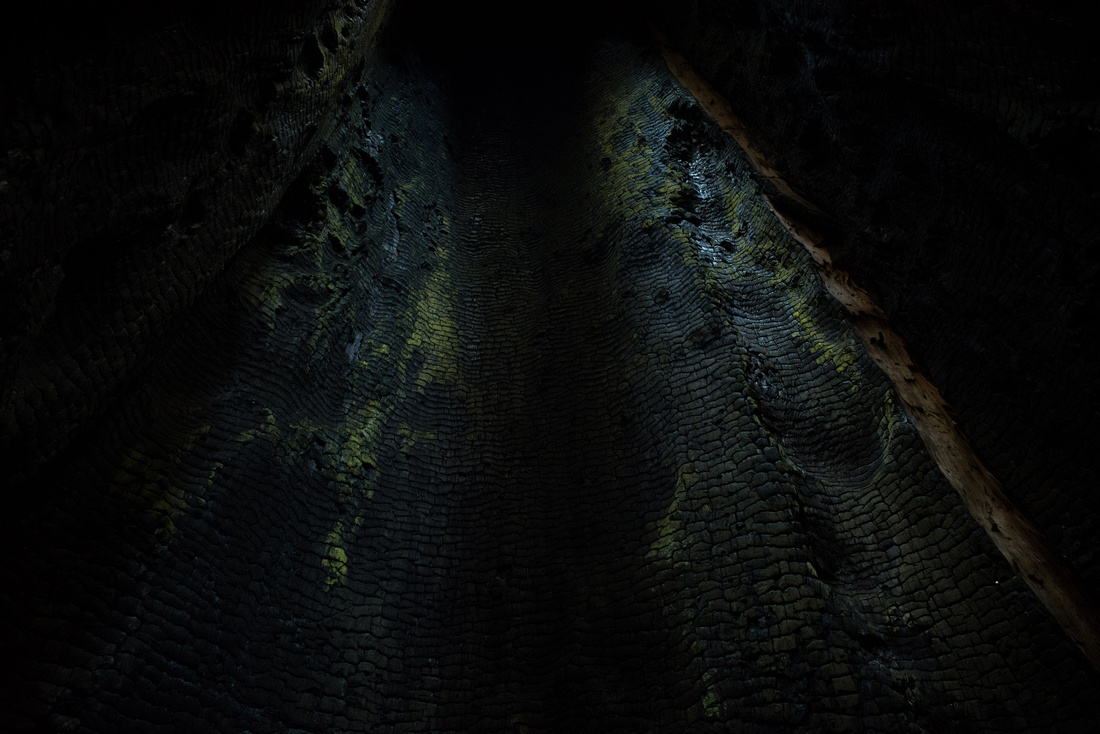 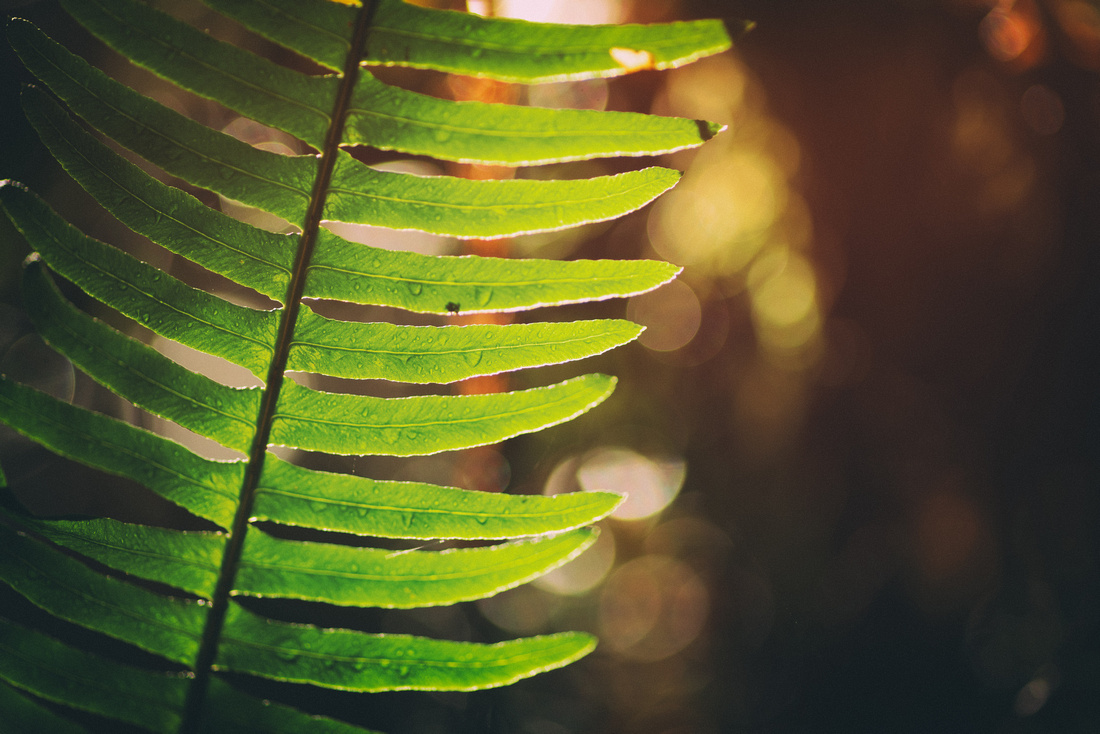 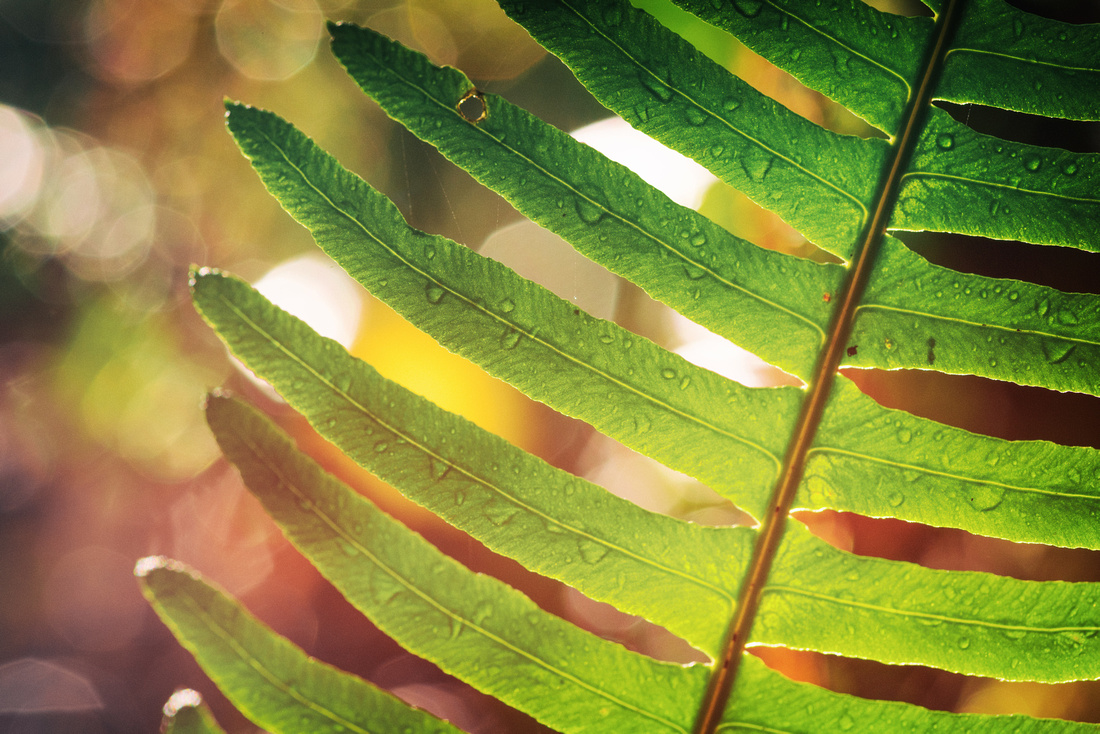 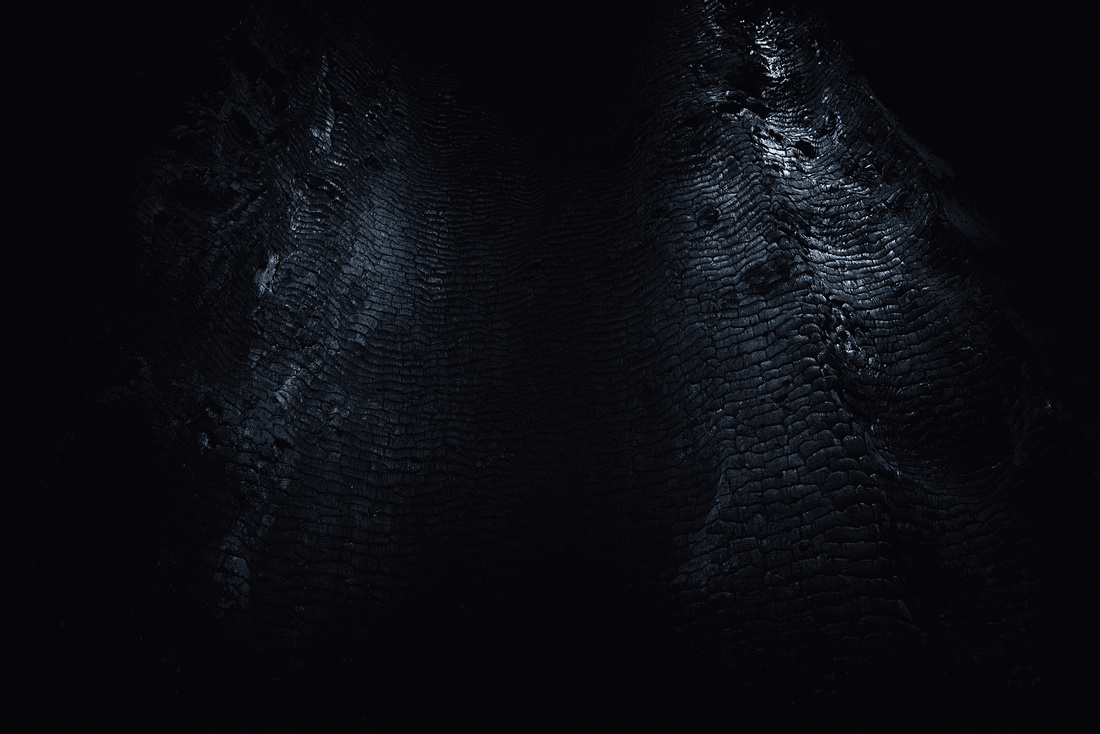 By 10am I was ready to continue the drive down the coast.  I had a lot of distance to cover in just a few days.

The drive down to San Francisco was beautiful!  I fell in love with the California Coast; I almost felt like I was back in the Bahamas.  I loved driving through all the little towns along the coast, each one had its own little charm.  By nightfall I made it to Mount Tamalpais, just outside San Francisco.

I found a campsite in the forest and set up my tent for the night.  Through the trees I could see the glow of the city, miles away.  Crickets chirped quietly all around and the air was still.  It was the most relaxing night in weeks.

The gate to the peak of Mount Tamalpais opened at 7am; as soon as the gate was opened I drove up to the summit.  I wanted to catch the sunrise above San Francisco. 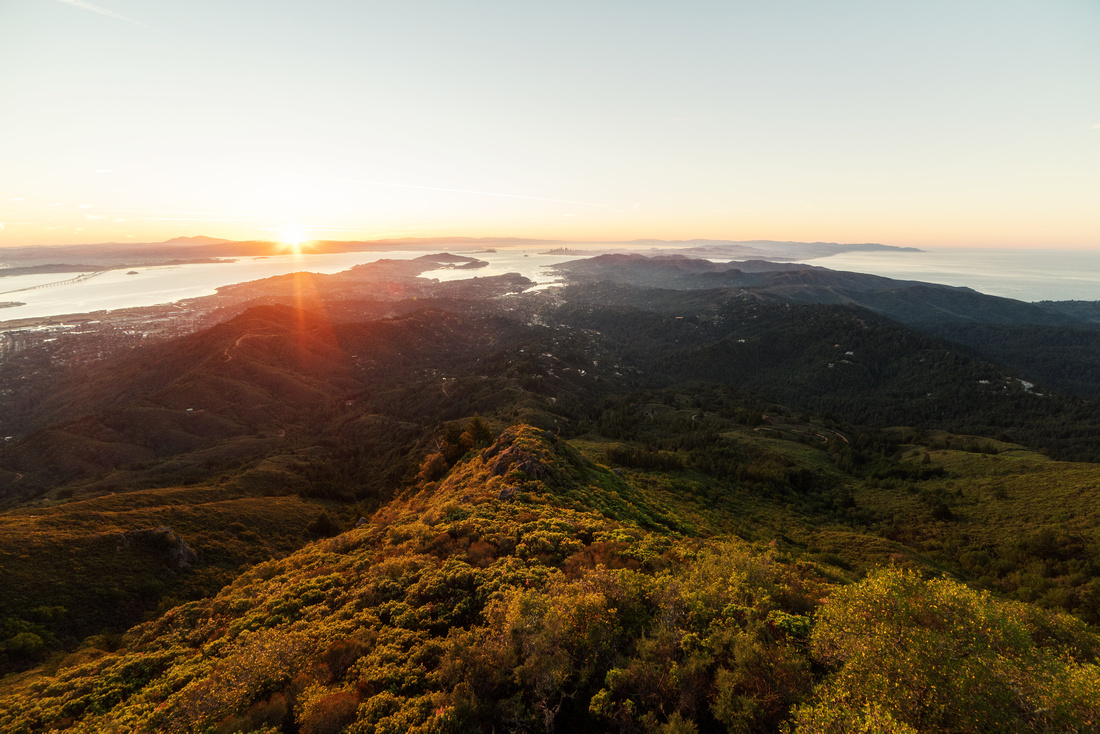 After the sunrise I headed down the mountain for a hike.  The views up here were spectacular.  It reminded me of Anvil, a fictional location in The Elder Scrolls IV: Oblivion game.  It was incredibly peaceful hiking along the rolling hills and I didn't see another hiker the entire time!  A rare moment of solitude. 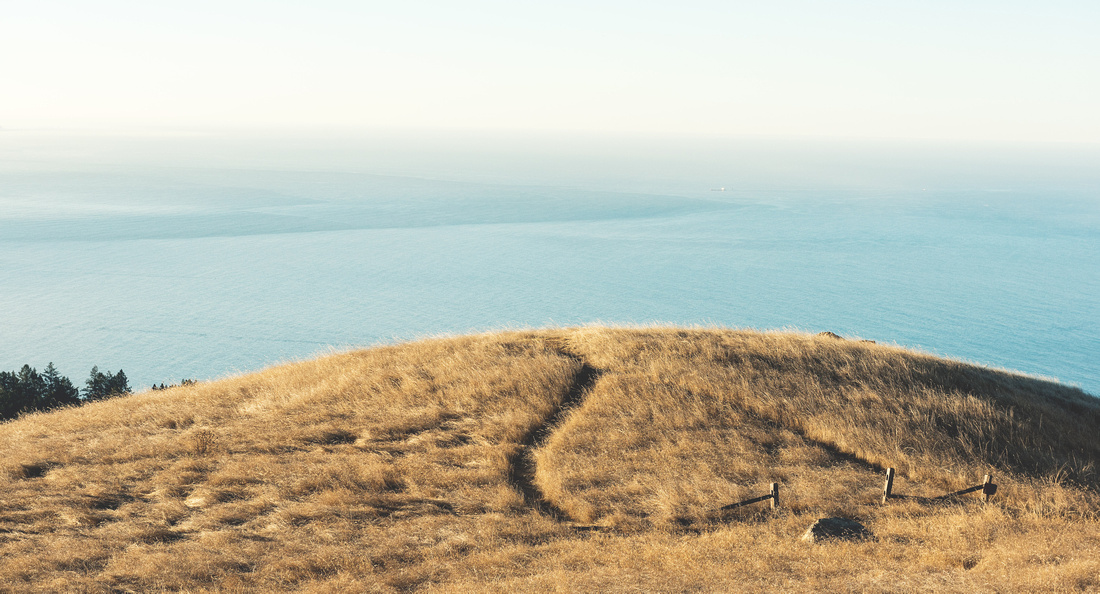 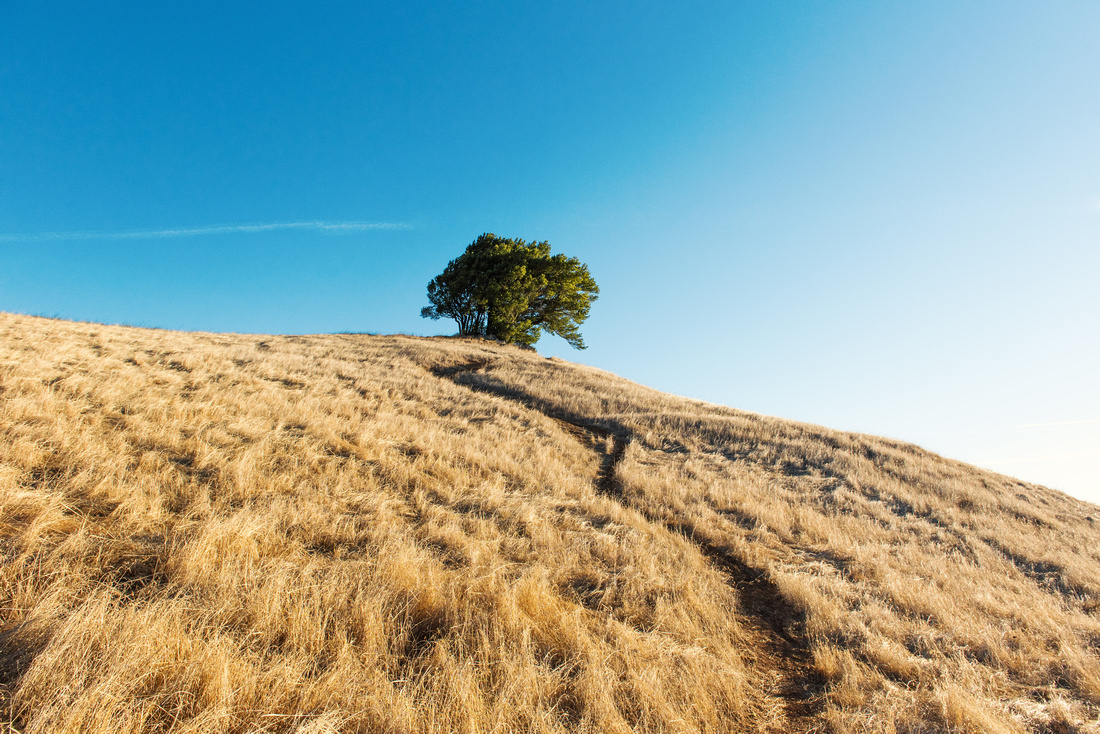 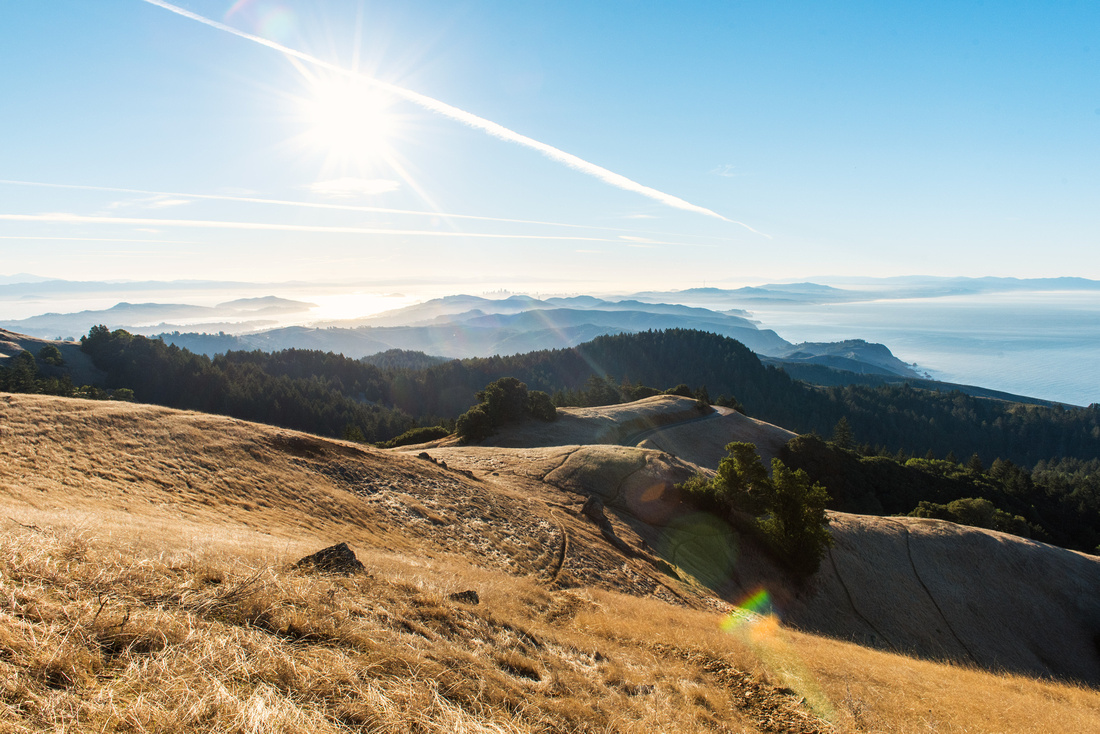 With my hike wrapped up, I began the drive towards San Francisco.  Unfortunately the lighting was very bad so I was unable to get any good photos of the Golden Gate Bridge.  I spent the rest of the day exploring the city.  After sunset I began the long drive to Monterey.

I spent another night sleeping in my car on the side of the road.  At this point, I've probably spent 2 months sleeping in this car.  When sleeping in a parking lot or on the side of the road, I normally have to construct a "fort" inside my car.  I try to block all the windows as much as possible, to keep the blinding lights from waking me up all night.  I usually string up a towel, or my rain-jacket, along the driver side windows.  I pile all the containers and clothes on the passenger side, to block the back window.  I also use a sun reflector to cover the windshield.  Then I get wrapped up in my sleeping bag.  I hate sleeping like this. 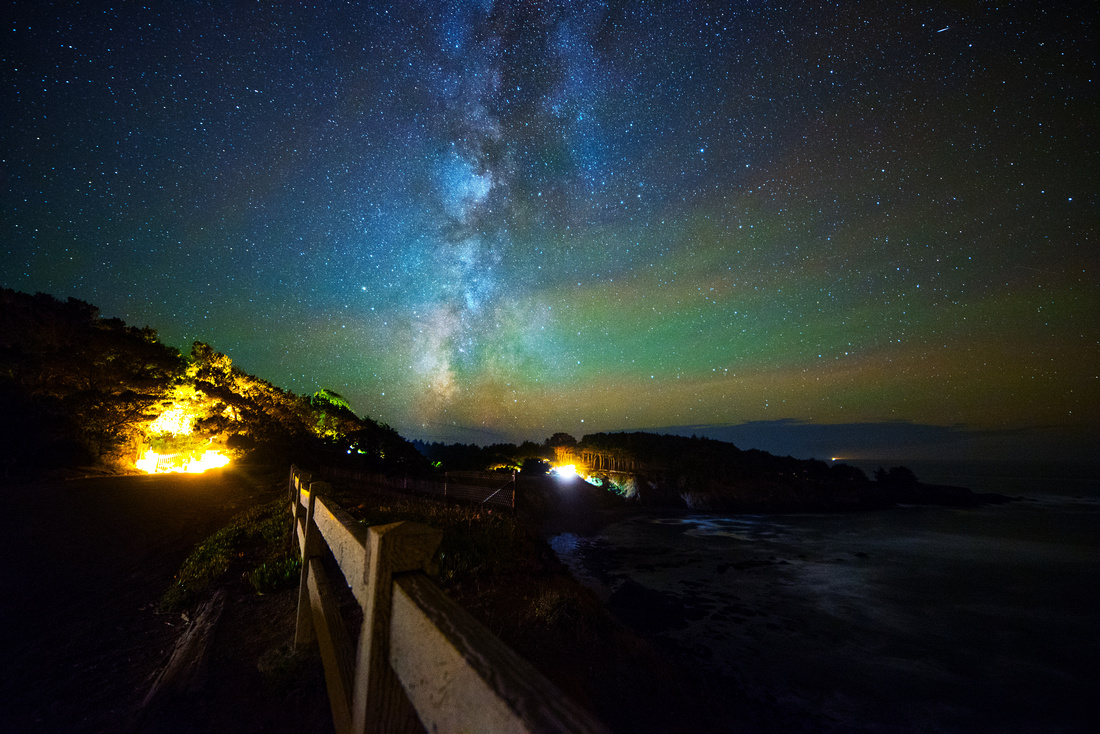 On the plus side, I can hit the road as soon as I wake up.  The next morning I made it to Bixby Bridge just before sunrise. 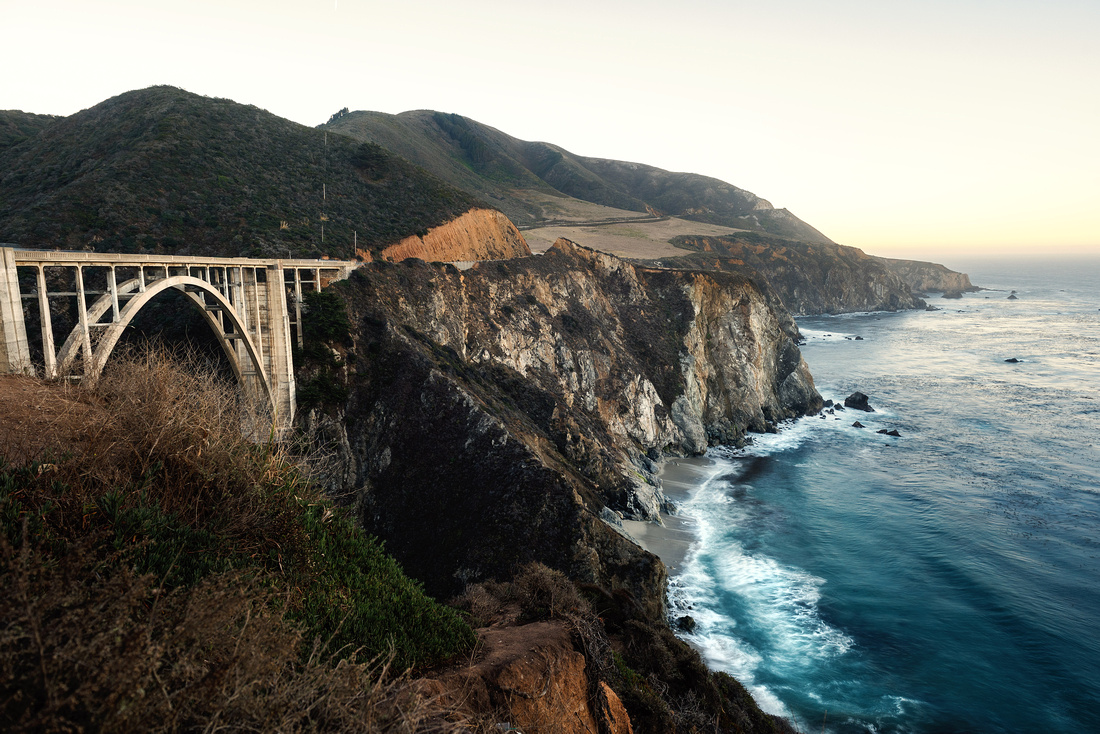 After a beautiful morning drive along the coast I arrived at McWay Falls, one of the most scenic locations I had seen on the entire trip. 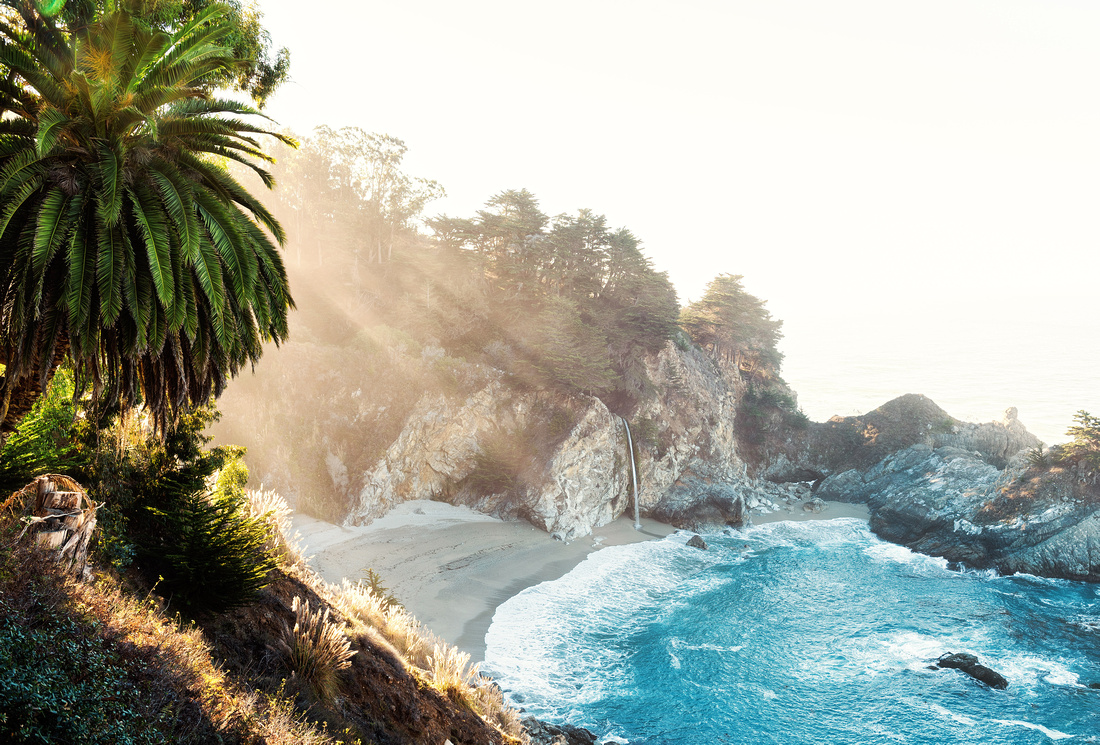 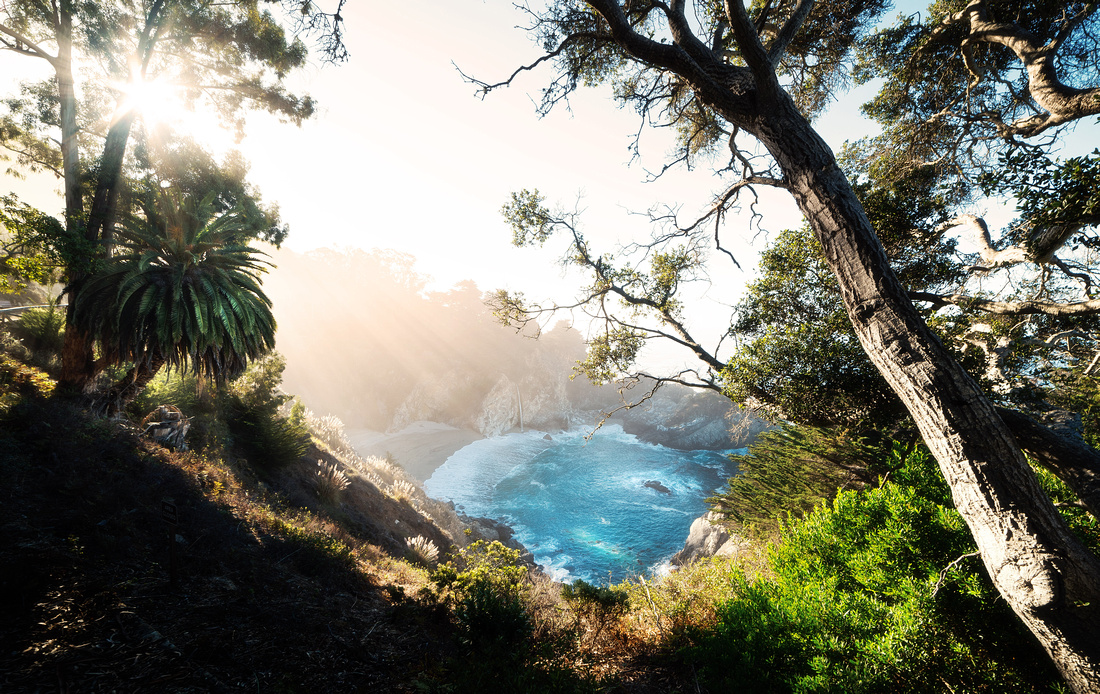 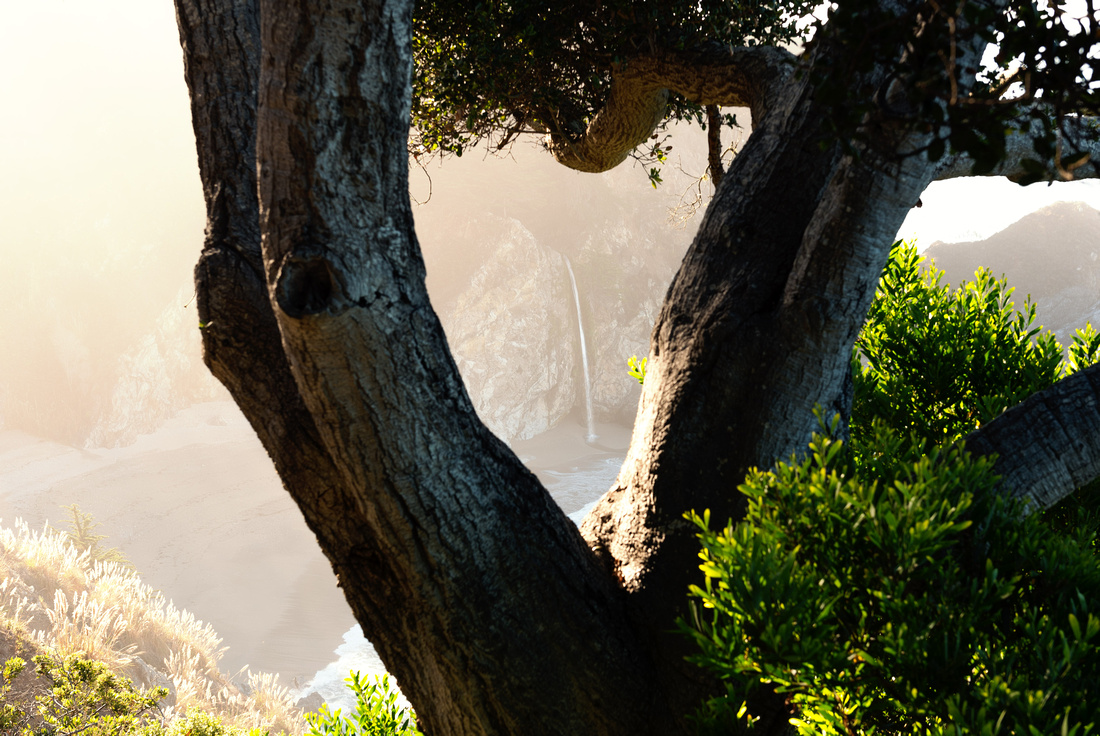 Mcway Falls reminded me of a fantasy location from a pirate movie, a little slice of paradise.  I mean, where else can you find a waterfall that flows onto a beach in a beautiful cove?

I had now gotten my fill of the coast, and I loved every minute of it.  With only a week left on the trip, I had to keep moving though.  My next stop was on the far side of the state, Yosemite National Park.