With only 1 week remaining, I made an abrupt turn East.  I now needed to drive across California to Yosemite National Park, only 255 miles away!

As I drove up the coastal hills I got one last glimpse of the Pacific Ocean, a little sliver of blue nestled between the mountains.  I soon found myself in an arid, flat expanse.  This was one of the most boring drives in a long time.  It reminded me of my drive out West, across the plains.  Eventually I entered the farmlands, endless rows of trees stretched into the distance.  By Golden Hour I had made it to Mariposa, where I had dinner.  Now I just needed to find a place to camp.

I eventually found my campsite for the night, a big gravel parking lot right off the main road into Yosemite.  I don't mind these dispersed camping sites, I can set up my tent right outside the car, with easy access to anything I might need.  I got settled in for the night and set my alarm for 6:30am.  I wanted to make it into Yosemite early, before the weekend crowds.

Of course I slept in, I just don't have the energy anymore.  At the start of this adventure I was up by 5am, hiking \ scouting out locations until 8pm, photographing the sunset, then staying out late into the night to photograph the Milky Way.  Now I'm worn out.

It was a cold morning in the park, but the sunlight had just began to creep over the eastern Sierra range.  My first view was Upper Yosemite Falls, still flowing so late into the year.

I decided to take a closer look at the waterfall using my Tamron 150-600mm lens, normally used on wildlife.  I couldn't believe all the intricate details carved into the rock face.  I wondered how many people had ever gotten to see this so close-up before... 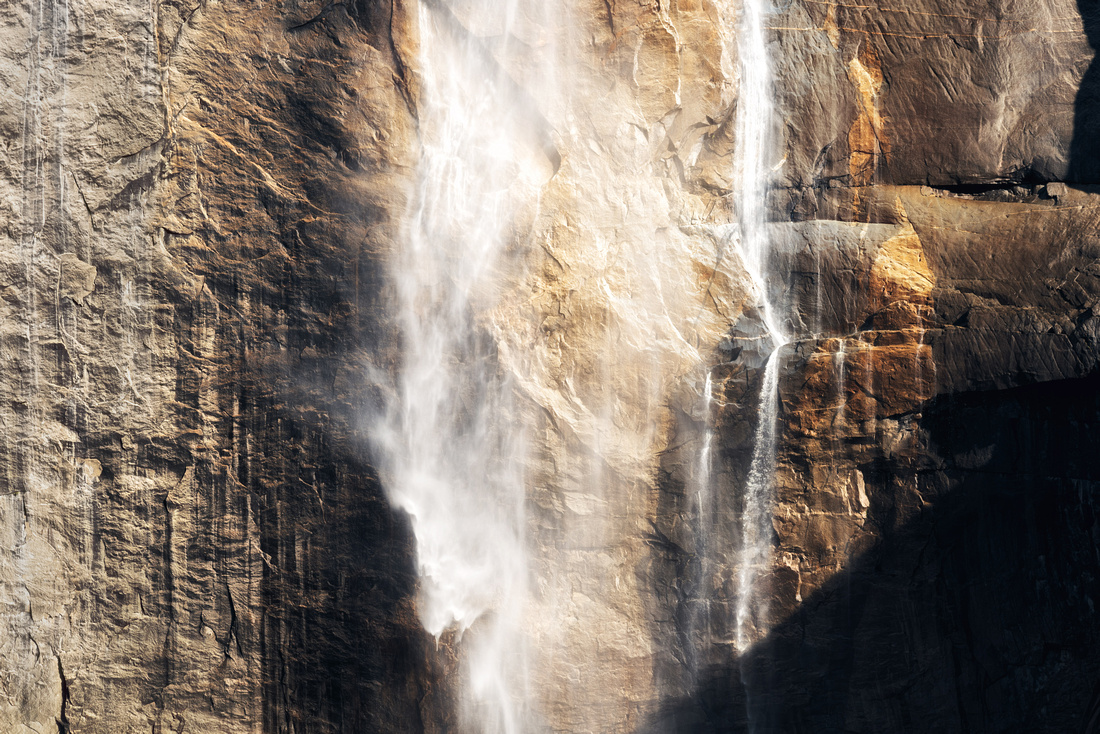 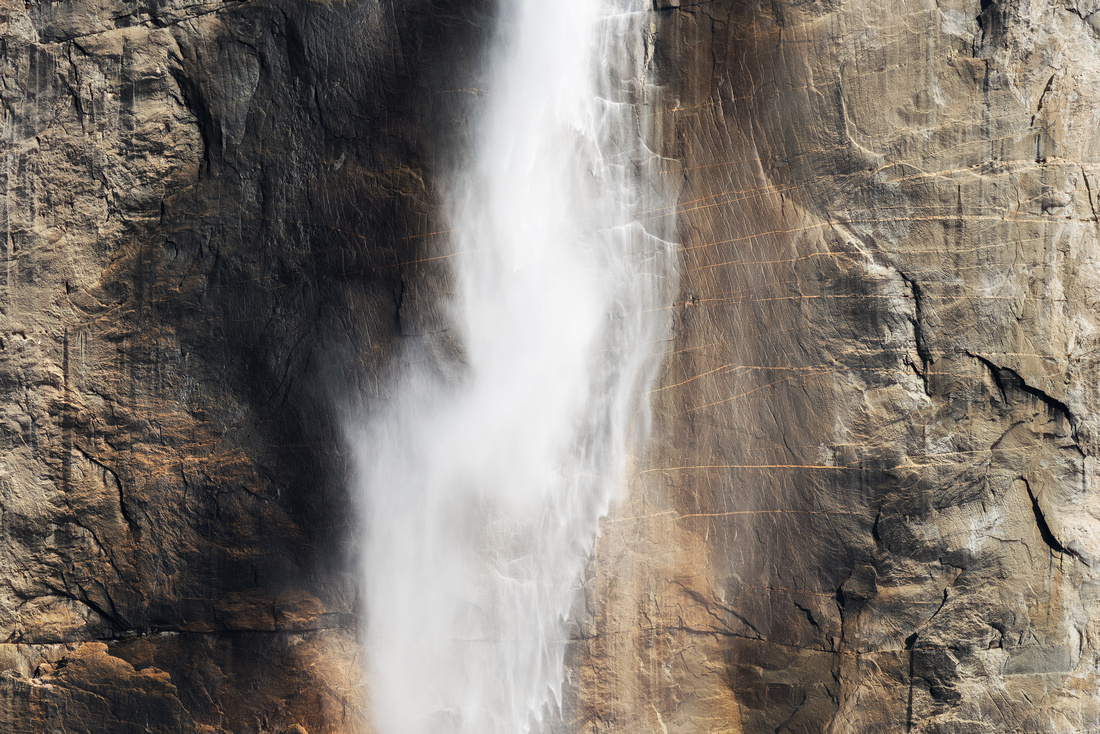 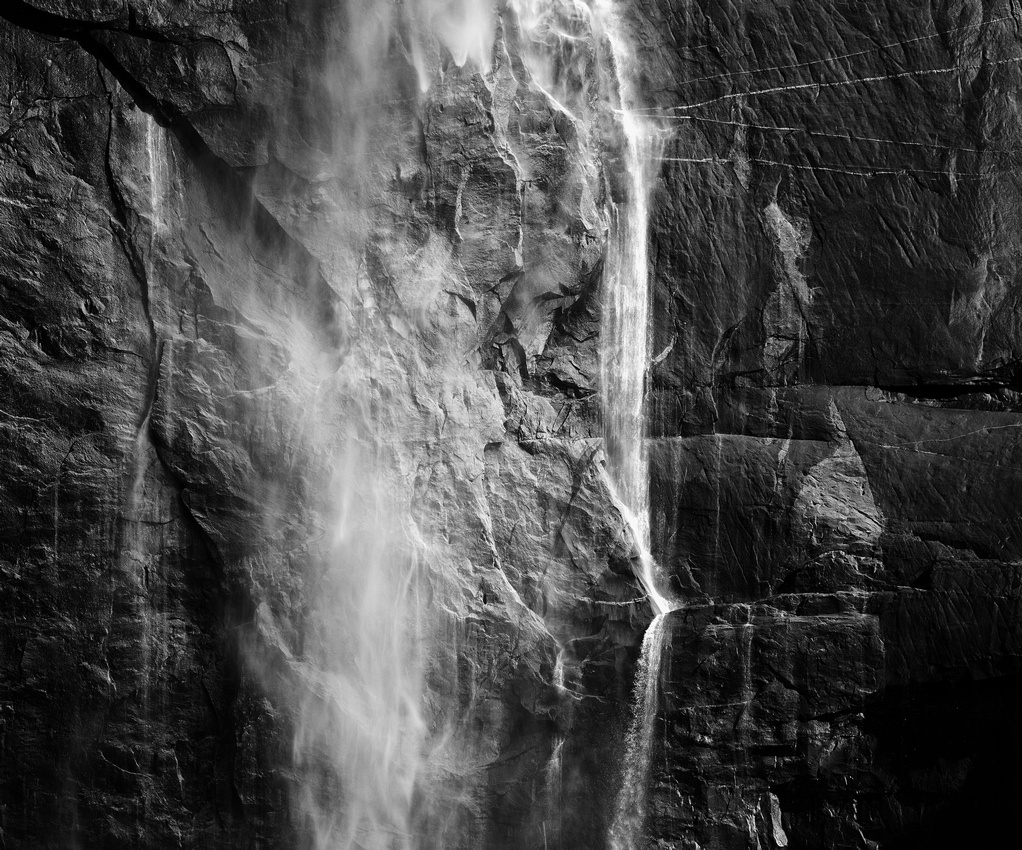 My next goal was to simply find a parking spot.  Due to major construction in the park, traffic patterns were completely disrupted.  I couldn't believe all the tourists this late in the season (October 22), but the weather was beautiful.  Eventually I found a spot in the forest, on a temporary lot.  I now had to walk a mile to the visitor center to fill up my Nalgenes and get a park map.  Along the way I saw a hawk! 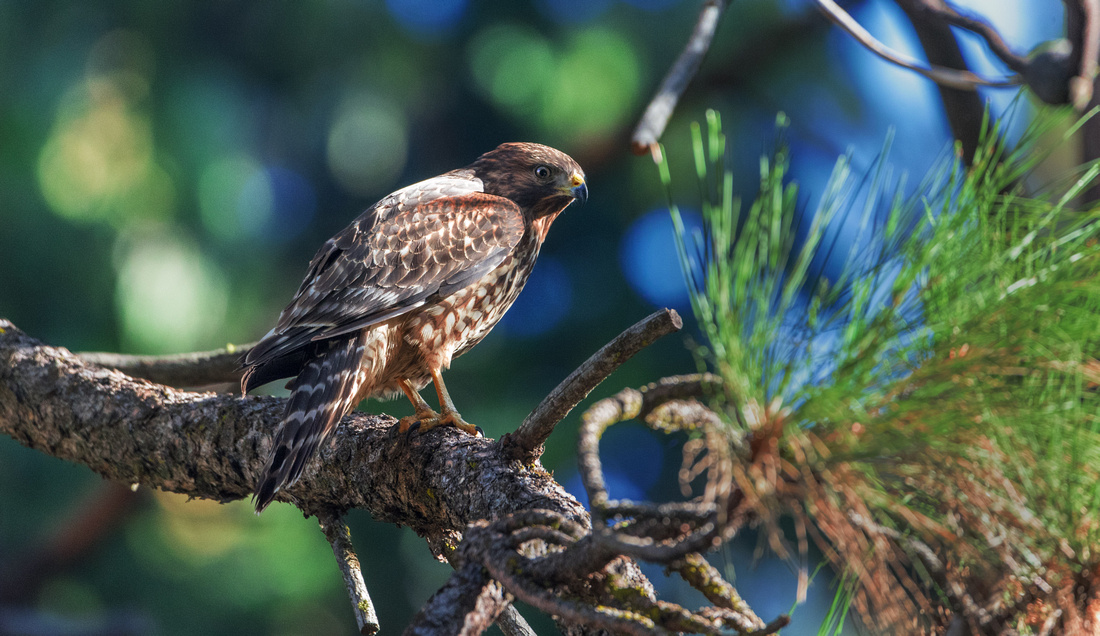 After filling up my water bottles and getting some food at the grocery store in the village, I saw the Ansel Adams Gallery.  I remembered reading a book on his work earlier in the year.  I had gone to the library to begin planning this entire roadtrip out.  My method was simple: check out landscape photography books and mark down the most beautiful locations.  Many of Ansel Adam's photos were taken in Yosemite, so it was great to finally make it out here.  I had to make this my Grand Finale of the trip, utilizing everything I'd learned over the past 4 months.

As I ate lunch I studied the sunlight.  I realized the best light would only occur near sunset.  That meant I had 2-3 chances to find a good location to do my work, not a lot of room for error.  I decided to head up to Glacier Point for today's sunset. 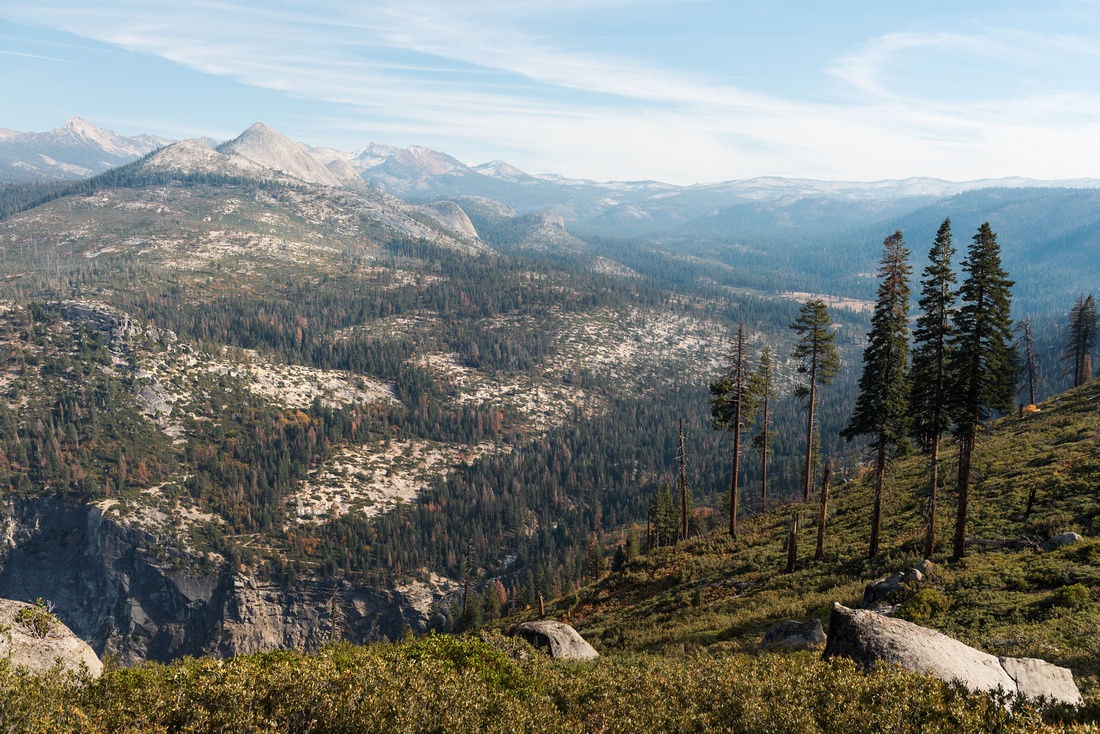 Of course, the tourists had overrun Glacier Point.  I realized I wouldn't be able to find a parking spot up there, so I decided to relax at one of the other overlooks instead.  This view reminded me so much of another video game, The Witcher 3.  Granite cliffs, pine forests, and blue sky. 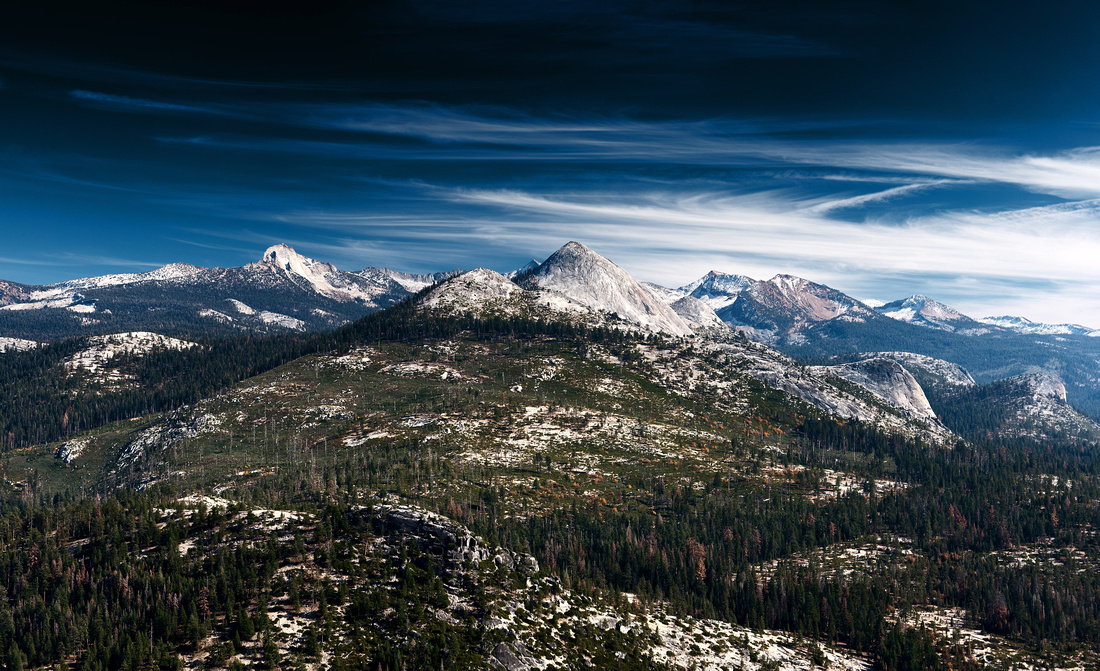 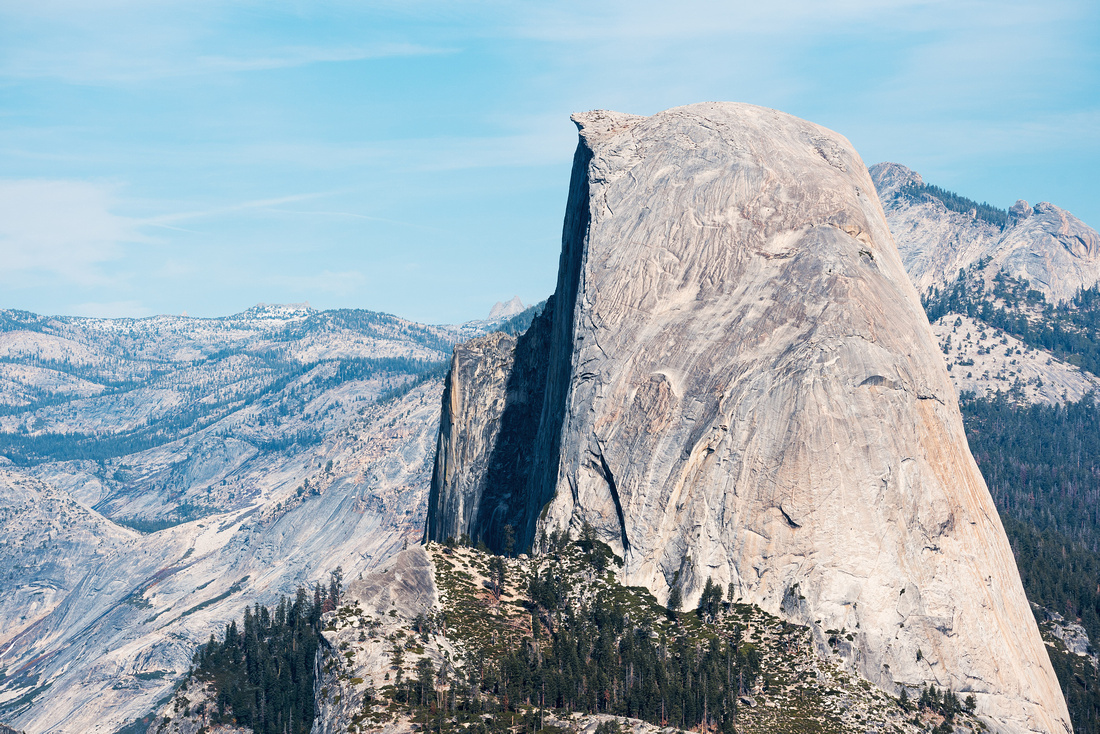 I wanted to get a closer look at Half Dome, so again I made use of my telephoto lens.  I zoomed in on the very edge, to that little overhang.

It was so cool to see people climbing up the side of Half Dome, as well as spy on the adventurers enjoying the view from the top. 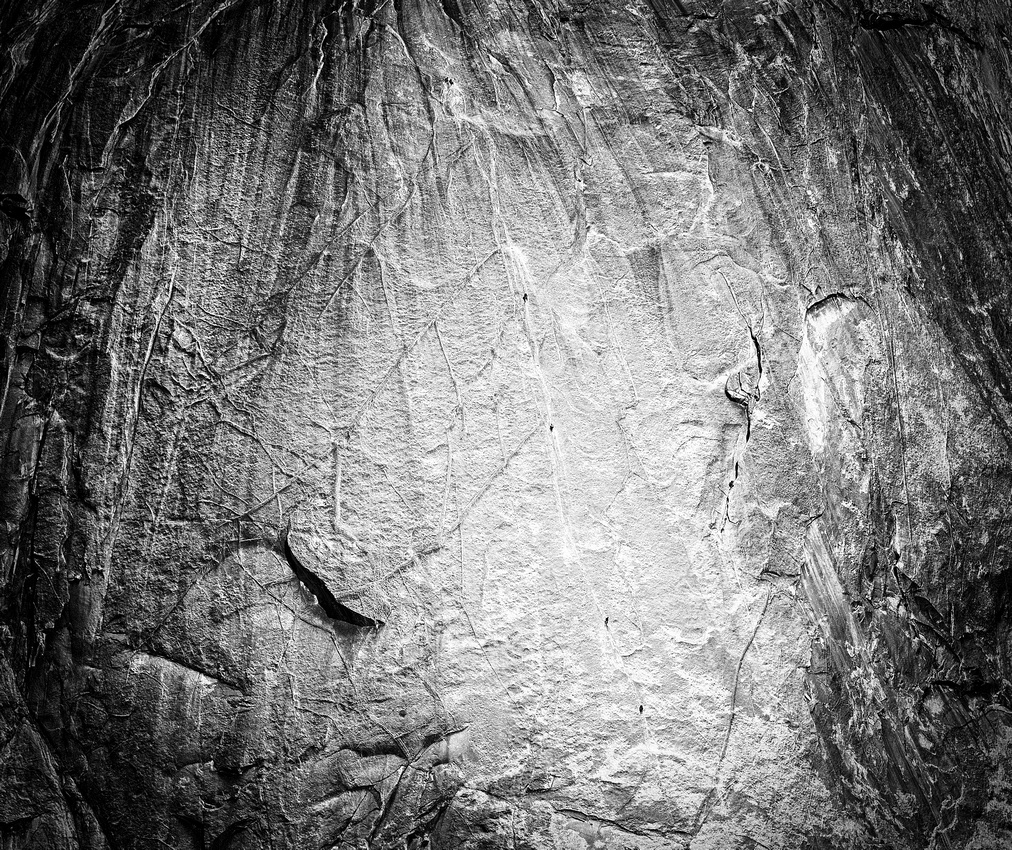 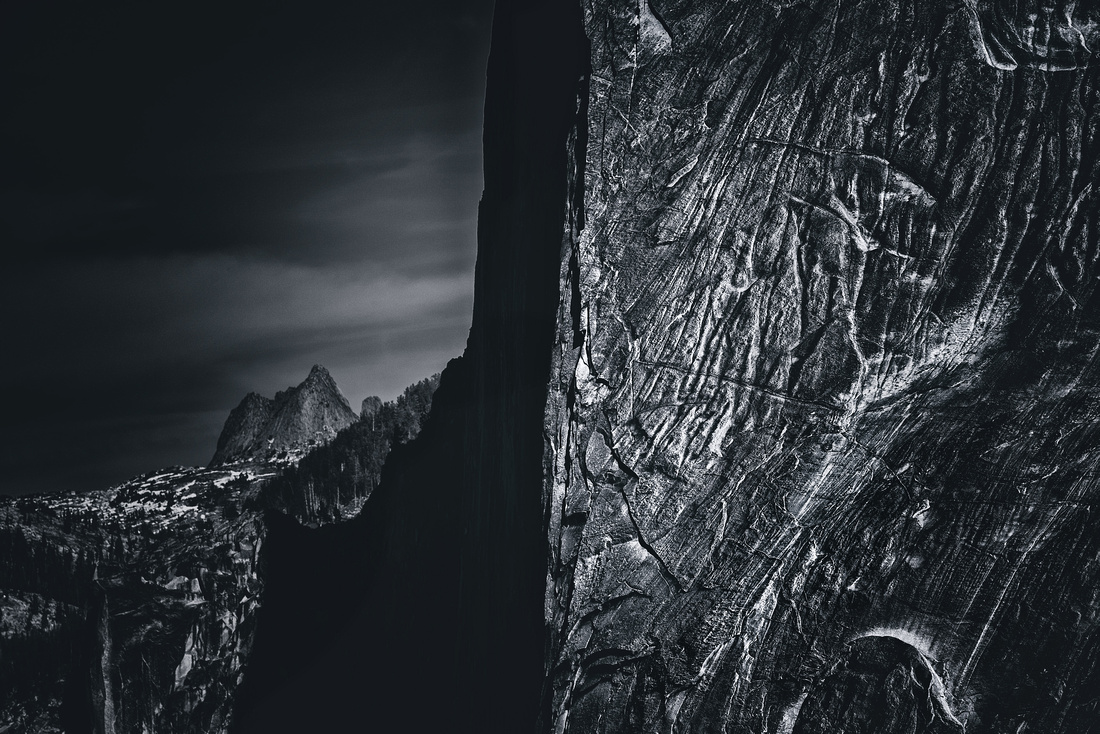 I watched the steady stream of cars begin to leave the Glacier Point parking lot, the tourists were headed back down the mountain before sunset.  To my surprise, the lot was still overflowing, I had to park on the side of the road, in the dirt.  I packed up my gear and headed to the overlook.  Completely overrun with tourists.  I climbed down to a ledge, hoping no one else would come so far down.  I didn't want people repeatedly getting in front of my camera while I was doing a timelapse.

I had an amazing view, and comfortable too!  The rock slabs almost felt like sitting in my bed back home, just a bit colder and harder. 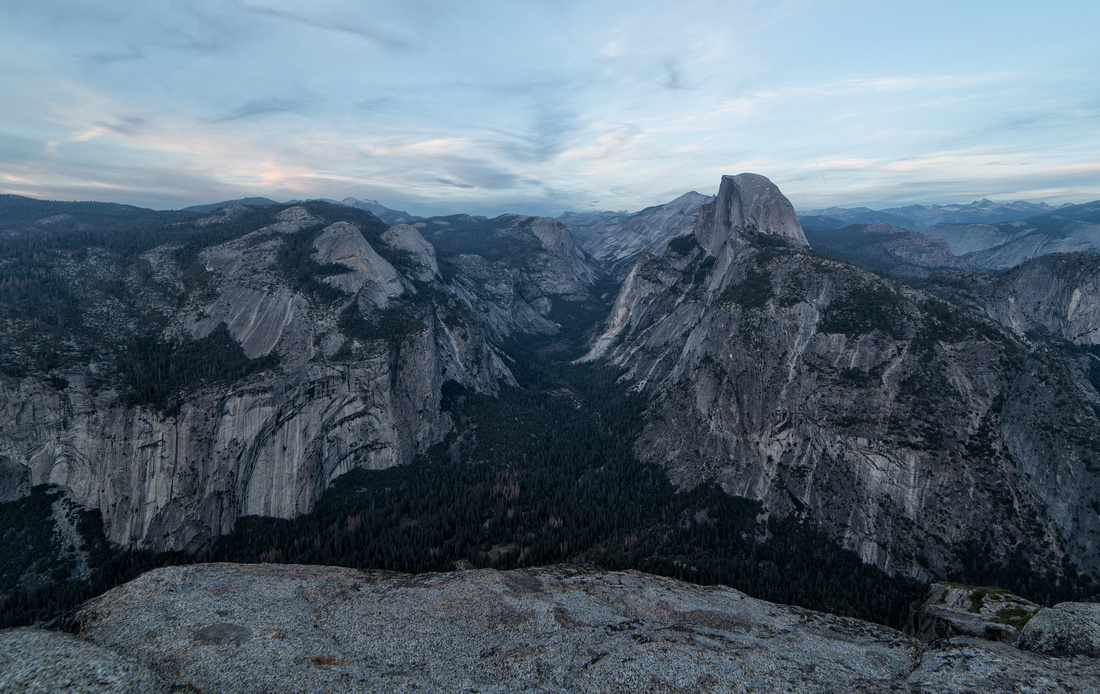 Looking down the sheer cliff face to my left, I saw the forest below. 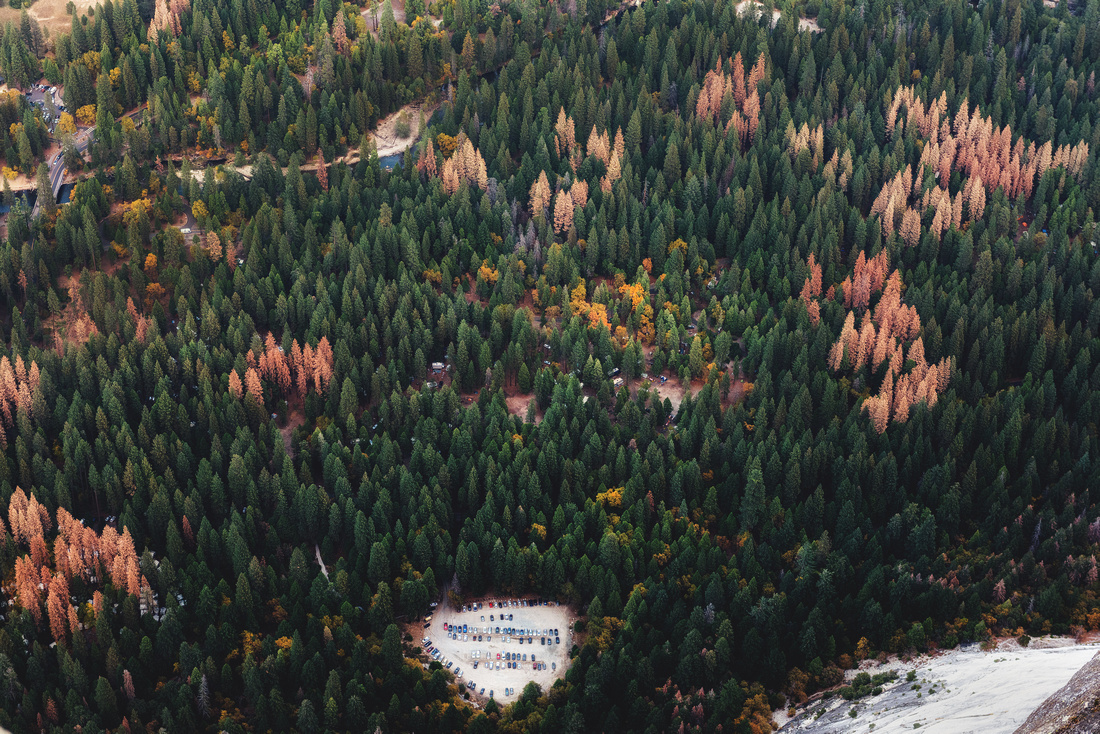 I stayed on my perch for hours, watching as the golden light came and went.  The sky slowly getting darker and cooler. 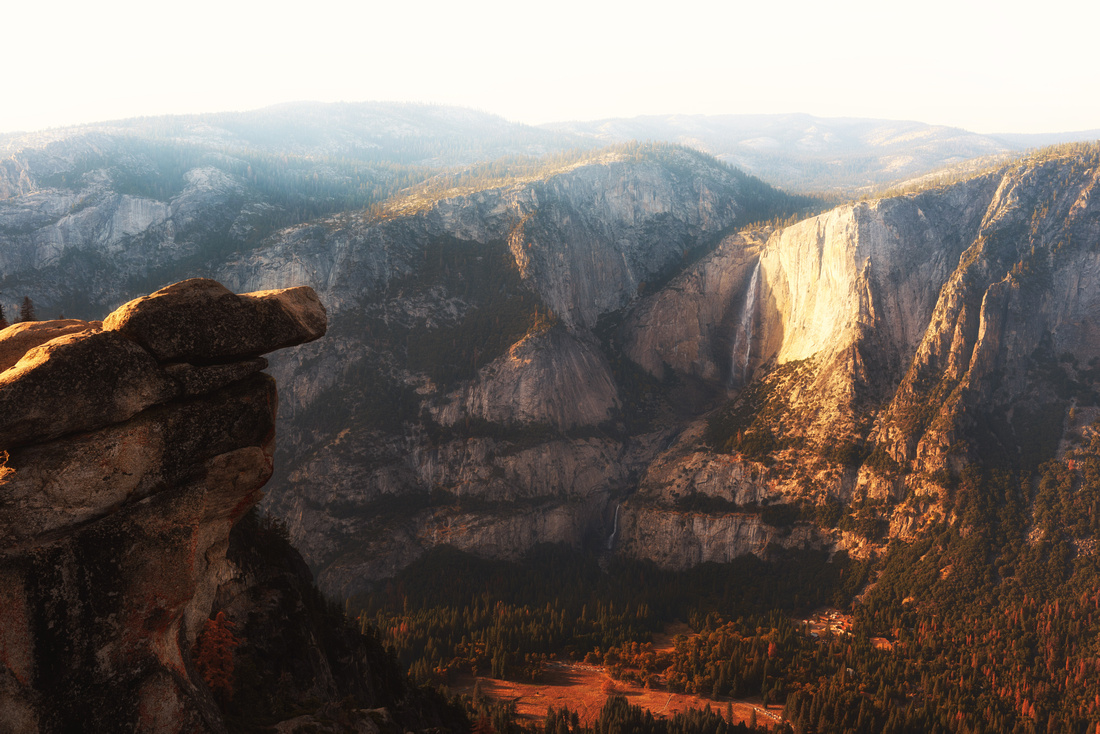 The stars slowly lit up the sky.  I looked down into the valley and saw all the lights from the village, like an Ewok village on Endor.  It was another wonderful night in the mountains. 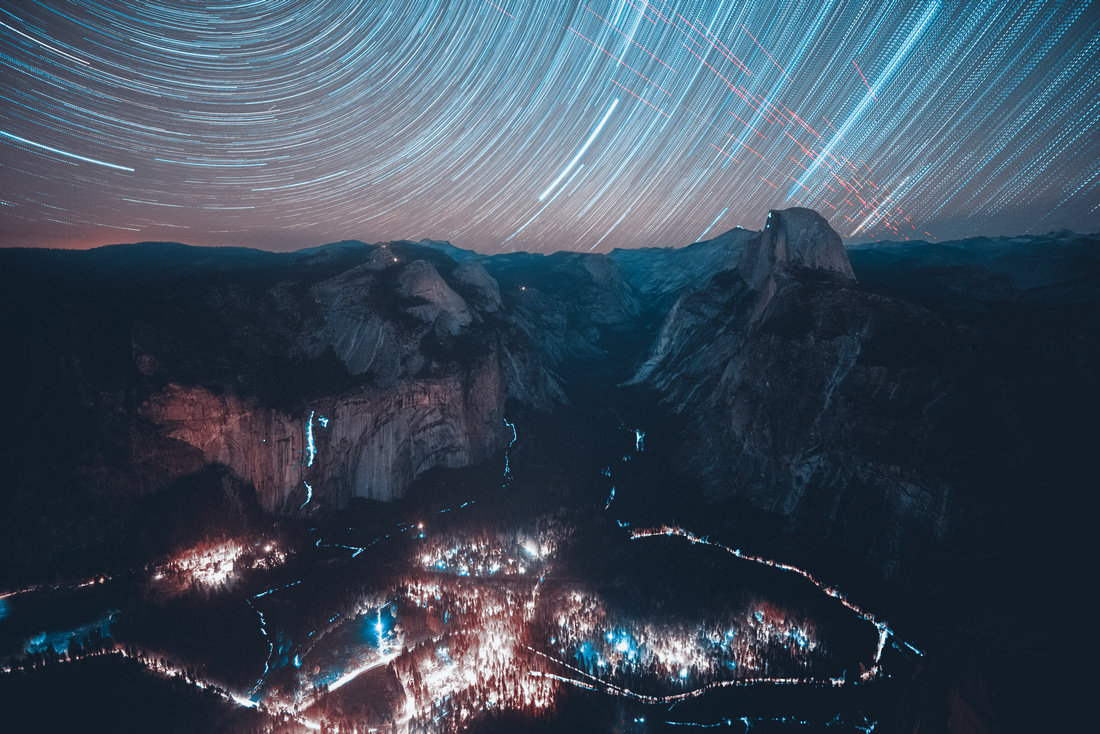 After my Star Trails were finished I started the long drive out of Yosemite National Park.  I made it to my dispersed parking lot campsite by 11pm and planned to wake up for sunrise tomorrow.

Of course that didn't happen.  Too tired again.  I eventually made it into the park by 10am.

With no destination in mind, I unfolded my park map.  Mirror Lake seemed to be a popular spot, with a nice view of Half Dome.

I eventually stumbled upon a shallow creek in the vicinity of Mirror Lake.  The water was ice cold!  I sat in the warm grass and watched as the hikers crossed the creek, screaming as they got their feet wet in the cold water.  As I sat in the grass I began to notice all the spiders, they were everywhere!  They must have loved the warmth of the afternoon sunlight as well.  Thankfully I had gotten over my spider phobia, or this would have been a nightmare. 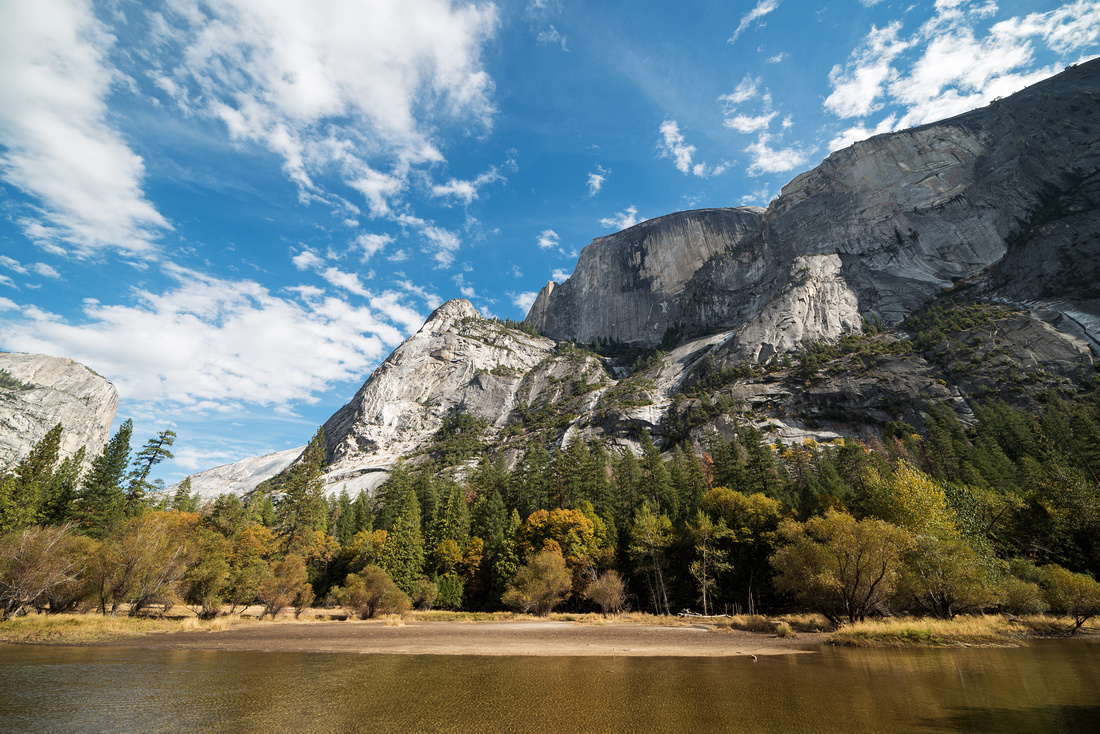 With sunset fast approaching I packed up, crossed the icy creek, and headed back to my car.  I was planning to spend today's sunset at Tunnel View, one of the most iconic locations in Yosemite.

When I arrived the parking lot was overflowing with tourists.  Busloads of Asian tourists came pouring out every few minutes.  They only cared about their selfies though.

It was a dynamic afternoon, as the sun broke through the clouds, illuminating Yosemite Valley.

I headed back to my campsite for the final time.  Since it was a Sunday night, I had the whole place to myself.  Little did I know this would be one of the worst camping nights of the trip...

At midnight I awoke to bright flashes of lightning and loud rumbles of thunder.  The thunder sounded so different here, it must have been reflecting off the mountains around me.  Soon the wind began to pick up, threatening to blow me and my tent away!  Since the ground was so hard, I was unable to stake the tent.  Then the rain began to pelt my rainfly.  I laid in the tent for an hour, trying to keep the corners taut and prevent the tent poles from getting too messed up.

The rain began to let up and I saw my opportunity.  I packed up my sleeping bag, clothes, and sleeping pads and got ready to break down the tent.  Thankfully the wind had died down a bit, so the tent deconstruction was fairly quick and easy.  Just as I got back in my car, the storm started Round 2.

I tried to get comfortable and get at least a few hours of rest, but the storm was so intense.  I was only able to doze off for short periods of time.

At least I was awake for sunrise finally!  I drove back into Yosemite, hoping to take the mountain pass over to Death Valley and beyond.  As I pulled up to the front gate I was informed that the mountain pass had just closed this morning!  Apparently the higher elevations had gotten some substantial snow.  Perfect!  I had a full itinerary planned out, from Mono Lake to Death Valley and down to Joshua Tree.  So much for that...

This is why I never made any real plans the entire roadtrip, I hate when a plan gets changed.  Much better to simply let things happen as they will, and go with the flow.

Well, at least I could visit Tunnel View one last time and then take the southern road out of the park.  I was happy to see that the storm had created beautiful conditions in Yosemite Valley. 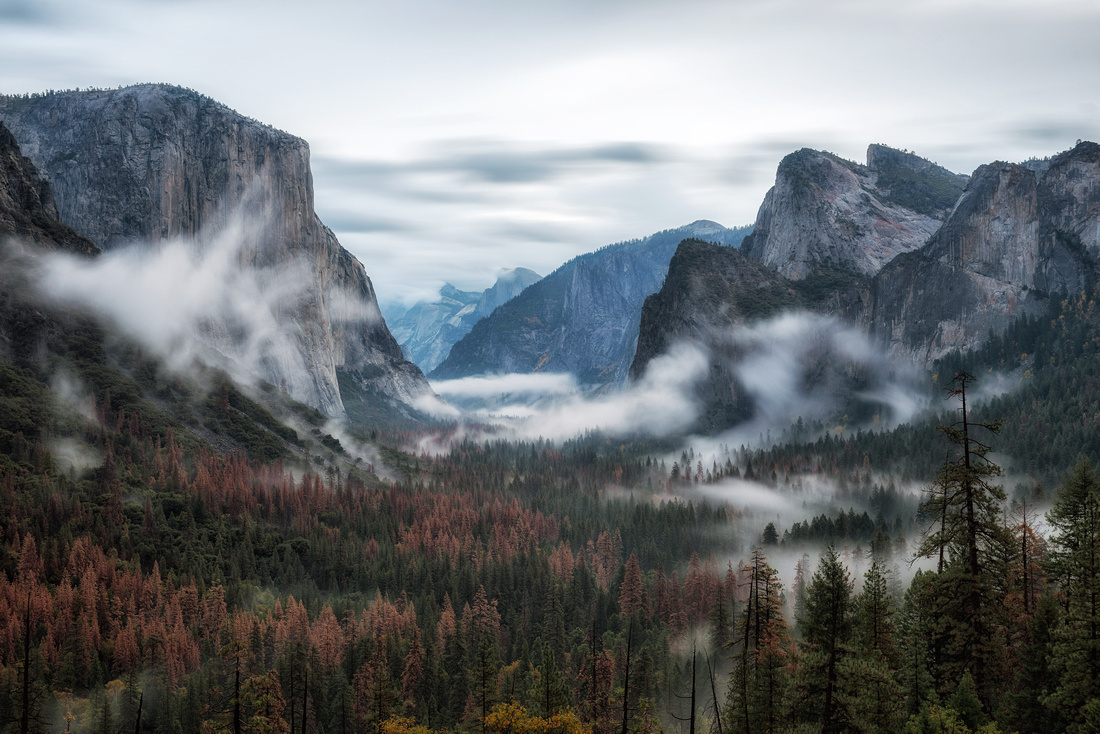 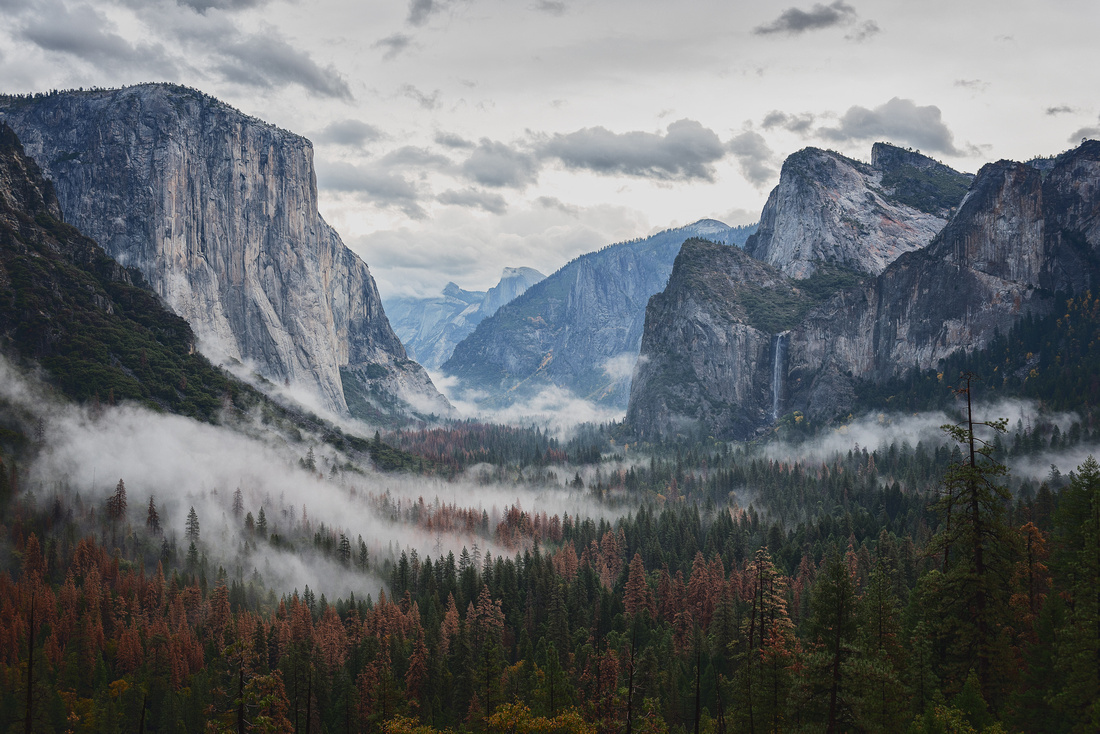