I've spent the last 4 years using almost every star tracker on the market, with one notable exception - the Fornax LighTrack II.  I had seen this tracker here and there on the internet, but never had a chance to actually try one out.  Thankfully, one of my supporters, Kip, had this mount and was willing to lend it out for a few months.  Unfortunately, I now live in the Pacific Northwest and have had exactly 1 clear night in the last 3 months.  Still, I was determined to at least create a tutorial on the Fornax LighTrack II.

The Fornax mount is unlike any other star tracker on the market, which can be a good thing or bad thing, depending on your point of view.  For example, most star trackers are fairly cheaply built, and have terrible tracking accuracy when shooting at 200mm+.  At best, you might be able to shoot 60 seconds before noticing star trails.  However, the LighTrack II claims to have exceptional tracking accuracy, allowing much longer exposures with telephoto focal lengths.

The LighTrack II requires a constant 12V power connection, like any Go-To Mount.  Therefore, you will need to bring an external power battery with you to use this tracker.  This could be a deal-breaker if you plan on hiking with this mount.  The other star trackers on the market all have either internal batteries or AA battery compatibility.  The LighTrack II is marketed more towards deep space shooters than Milky Way photographers, so I don't think it's that big a of a problem.  Most likely you'll be setting up the Fornax mount in your backyard or within 100 feet of your vehicle at a dark-sky destination.

The Fornax has another noticeably difference, the "friction plate", or swinging arm, that's responsible for moving your camera with the speed of the stars.  This is a big difference from the other star trackers, which usually have internal gear drives.  Gear drives are much more common, but that doesn't necessarily make them good.  The gear drives found in most star trackers have lots of issues, which usually result in blurry stars!  I've personally dealt with this many times, and it is very frustrating.  You can do everything right, but the tracker still messes things up and your photos are ruined!  A friction drive sounds like a nice upgrade!

Unfortunately, this friction drive also has a very serious drawback - you can only shoot for 107 minutes!  Once that time span elapses, the arm has moved through its entire range and needs to be reset.  You have to "wind it up" again to begin tracking.  During this "wind up" process, your composition will be moved and you'll need to adjust your ballhead and camera to re-find the object you were photographing.  This can be exceptionally cumbersome if using narrowband filters or shooting at a very high focal length... 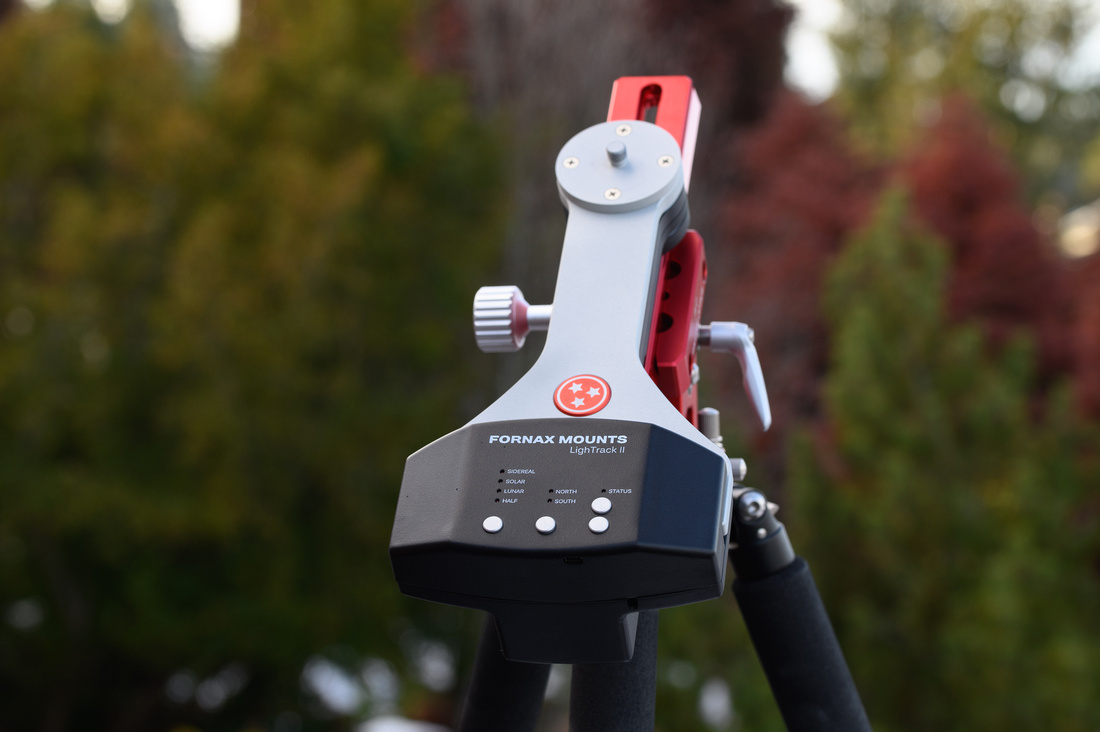 Some things never change...  Like almost every other piece of astrophotography equipment on the market, the manual and instructions for the LighTrack II are barebones.  Here's a link to the official user manual, all 5 pages of it.  If the manual is only 5 pages long this should be an easy setup process, right?  Not quite.  Fornax also has an Installation Guide that is equally lacking in specifics.  I don't mean to harp on Fornax exclusively, I have the same problems with iOptron and SkyWatcher.

Honestly, a lack of clear instructions is what prompted me to begin creating tutorials back in 2018.  I couldn't find any good videos on how to actually use my SkyTracker Pro at the time, so I had to figure it out myself.  Then I decided to create a little video to show others what I learned, and hopefully make their lives a little easier.  This eventually turned into a massive, years-long project to create my Star Tracker Courses and the numerous YouTube videos for the various trackers.

Despite having over 1,000 hours invested into star trackers and astrophotography over the past 4 years, I still found myself initially confounded by the Fornax LighTrack II.  The design is a radical departure from the gear-driven mounts that most of us are familiar with.  To make matters worse, while there are some good videos on the Fornax, none of them show how to actually use the darn thing.

At the very least, I wanted to write down the main steps for using the Fornax LighTrack II:

1. Find Polaris overhead and get oriented

2. Attach LighTrack to latitude base and tripod

3. Dial in your current latitude on the wedge / base

3. Crouch behind the tracker, and verify Polaris is centered above it

5. Find Polaris inside the polar scope

6. Use the azimuth and altitude adjustment screws on the wedge / base to place Polaris on the reticle as required (see here)

9. If using dec bracket, balance the camera in both Right Ascension and Declination (see here)

10. Attach power cable to external battery and turn on the LighTrack

11. Use the buttons on the tracker to "arm" the friction plate

12. You now have 107 minutes before you reach the end of the tracking distance (and must reset the friction plate)

13. Find the object you want to photograph and get it centered up in your camera

14. Focus on the stars in the image

15. Turn off Vibration Control and Auto-Focus

I also created a full-length tutorial to show exactly how to use the LighTrack II.  You can watch the video below:

First Night with the LighTrack

The main selling point of the LighTrack II is that it provides unparalleled tracking accuracy.  I was pleasantly surprised to see just how far Fornax pushed the mount during their tests.  Achieving sharp stars at 5400mm over the span of 2 minutes is no easy task!  Even an expensive, large, and heavy Go-To mount would have trouble with that.  Still, I wanted to give things a try and see how the average person might fair when using the LighTrack II from their backyard.

First, let's clarify one important point - the tracking accuracy is only as good as your polar alignment.  This was a problem I ran into on my first night with the tracker.  I found this particular polar scope to be more difficult than the typical iOptron scope.  As you can see here, you must rotate the polar scope to a specific spot, in line with the star Kochab.  This can be somewhat challenging if you don't have the best eyesight.  I much prefer the simplicity of the iOptron or SkyWatcher reticules.  When using a SkyWatcher or iOptron polar scope you can use a free app on your smartphone which will tell you exactly where to put Polaris on the reticle.  The only challenge is finding Polaris inside the polar scope, but that can be done fairly quickly with some practice.

Once I completed my polar alignment, which wasn't perfect, I began taking some test photos at 2 and 4 minutes.  I saw star trails in my photos, indicating a few potential problems.  These include - an unbalanced setup, a bad polar alignment, or errors with the tracker itself.  In this case, my polar alignment was the likely culprit.  Thankfully, there's an independent "arm" for the polar scope.  This allowed me to move the polar scope out of the way of my camera, and still see Polaris.  Unfortunately the sky was rapidly clouding up, and I was unable to check my polar alignment again.

After a fairly unsuccessful night, I at least had some experience with the tracker.  Here's what I learned: 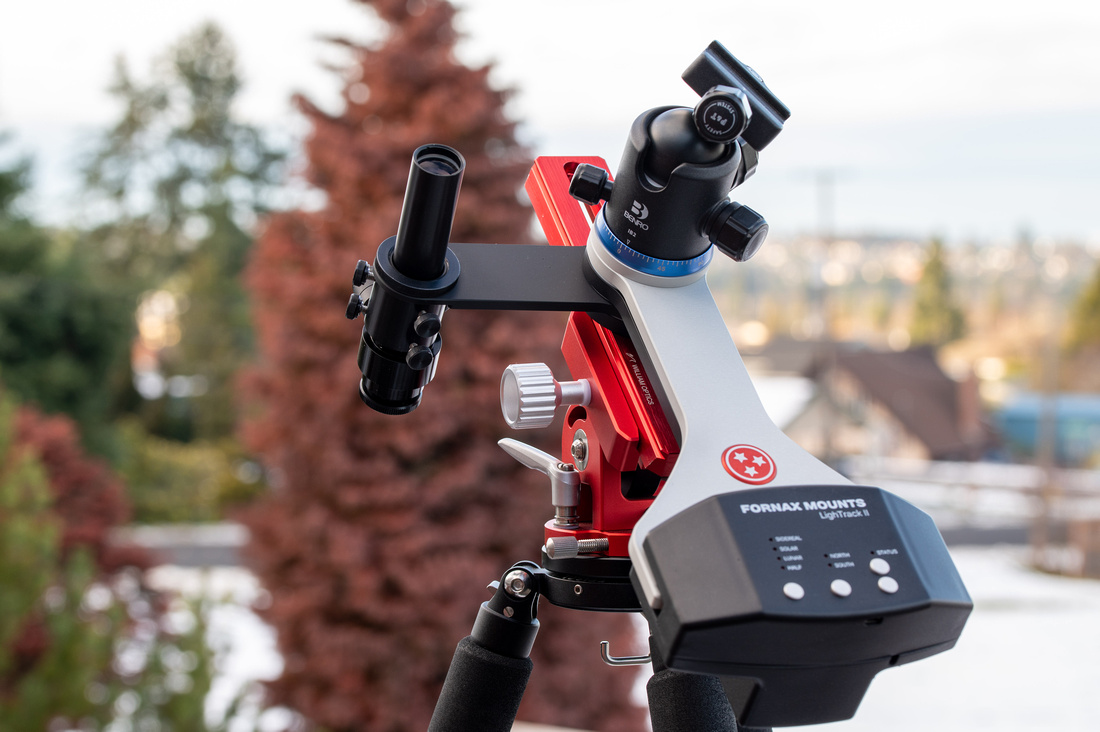 One of the major problems I have with the Fornax LighTrack II is the total cost.  The current retail price of the tracker itself is ~$500 USD, which is on par with the other trackers.  However, the Fornax doesn't include most accessories (unlike the SkyGuider Pro and Star Adventurer).  Therefore, you'll also need to buy a polar scope, latitude base, and possibly the counterweight kit (if you plan on using a telephoto lens / telescope).  Their prices are as follows:

Polar Scope  ~$150 USD  (I don't actually recommend this polar scope, but it seems to be the default choice.)

If you want the "Full Bundle" of Fornax gear, you're looking at a ~$1,500 USD investment.  To make matters worse, I couldn't find any website where the prices were listed in USD, it was all Euros.  This could add additional fees and shipping complications to many US-based astrophotographers.  For those in Canada, Fervent Astronomy seems to sell the LighTrack II and accessories.

Meanwhile, I could get a SkyGuider Pro for ~$500 (which includes the latitude base, polar scope, and counterweight kit), along with an auto-guider and guide scope for an additional $250.  For a total investment of ~$750 I could have a lightweight, portable, and dependable tracking mount that can be used for both wide-angle Milky Way photography and deep space astrophotography.  With the auto-guider configured properly, I can easily shoot 3+ minute exposures at 600mm on the SkyGuider Pro.

Alternatively, you could buy something like the SkyWatcher EQ6-R Pro for a bit more than the Fornax full-package.  The EQ6-R Pro has a major advantage over the LighTrack II - Go-To functionality.  A Go-To mount can automatically find any object you want to photograph, whether that's the Heart Nebulae, Andromeda Galaxy, or anything else!  This makes shooting at night much easier.  With the LighTrack II, and all the other star trackers, you must find the object you want to photograph manually.  It can take over 20 minutes to find and center-up the nebula.

I should mention that you can always attach the Fornax mount to a cheaper latitude base, like this SkyWatcher one that costs $65.  But you'll still need to purchase the over-priced counterweight kit and a polar scope to use with the LighTrack II. 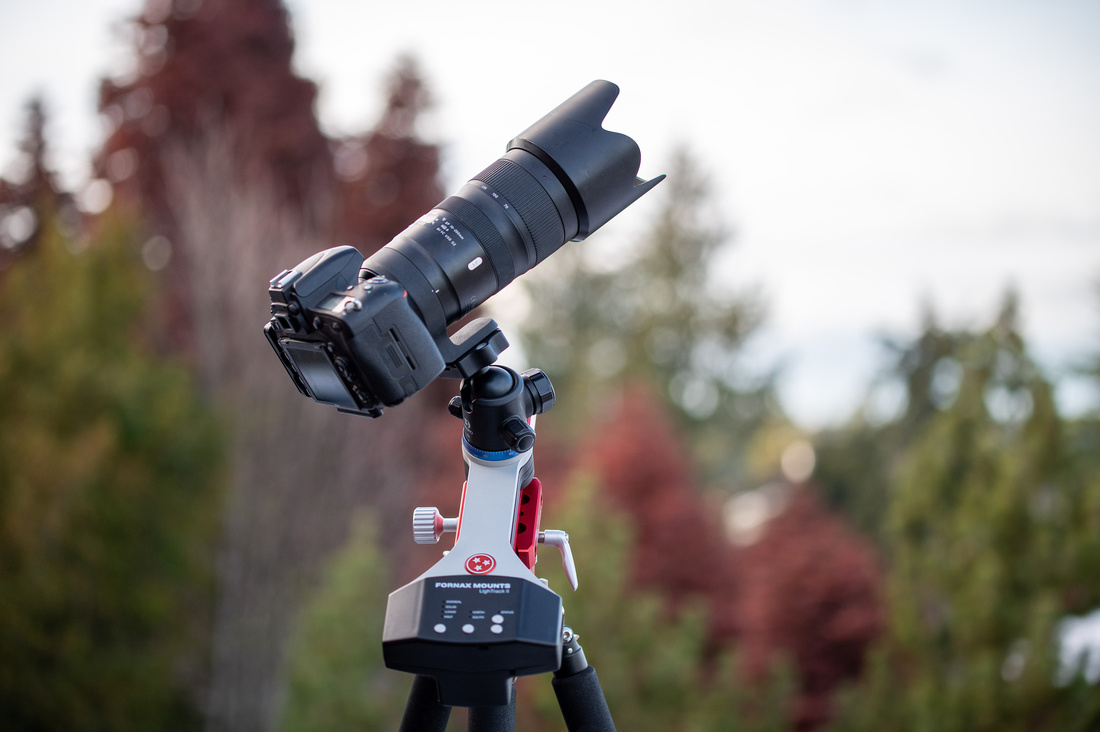 The Fornax LighTrack II is a novel approach to astrophotography.  It seems like the engineers at Fornax wanted to avoid the common problems of gear drives, and create a much more reliable star tracker.  In theory, that's great!  In practice, I found a few problems with the design.

My first problem with the Fornax is the limited shooting time.  You can only capture about 100 minutes of data before the tracker must be reset.  Meanwhile, the Star Adventurer and SkyGuider Pro can shoot all night long, without any user intervention.  (Granted, I don't recommend leaving them for more than 20 or 30 minutes without a checkup.)  The larger issue here is that you will need to recompose your image.  During the reset process, your composition will shift and that needs to be corrected for.  I realize that you can hold the camera in place while the arm is being reset, but the composition may still shift noticeably, especially at higher focal lengths.  This small annoyance can turn into a lot of wasted time, especially if you're photographing a faint nebula.

*For those doing Milky Way photography with a wide-angle lens, the limited shooting time is of no real concern.  It is very easy to adjust your ballhead and find another great wide-angle composition after the reset.  This would only be a problem when shooting with a telephoto lens.

The other problem I have with the LighTrack II is the price.  The tracker itself is fairly priced, especially considering the quality craftsmanship, but the accessories are a rip-off.  A declination bracket / counterweight kit should not cost ~$400...  Don't forget, if you live in North America you may have a hard time actually finding a retailer.  Fervent Astronomy, based out of Canada, is probably the closest you can get if you're located in the United States.

All things considered, I find it hard to recommend the LighTrack II to the average astrophotographer.  You could buy a cheaper star tracker, like the SkyGuider Pro, (this bundle includes all of the required accessories) and still be way under the cost of the LighTrack II full package.  Or, you could invest in a more robust Go-To mount for the same price, which will ultimately provide more value in the long-run.