This week I finally had the opportunity to test the Nikon 14-24mm, Tamron 15-30mm, and Rokinon 14mm against one another.  Cherry Springs State Park, in Northern PA, provided the perfect testing environment with its incredibly dark sky.  I had a couple goals with this test: determine how vignette effects amp glow, test coma, test vignette, and see how well a dark frame subtraction would work on each lens.

I've included 3 separate sets of images in the slideshow below.  The order is always Nikon, Tamron, Rokinon.  First are the RAW photos, no edits were done.  The next set of images shows the RAW photos after the Lens Correction Profile was added.  (I applied a manual vignette removal for the Rokinon, which has no Lens Correction Profile).  The last set shows edited photos.  I initially edited the Nikon photo until it looked pretty good, then copied those same edits to the Tamron and Rokinon photos.  You can click here to see the gallery and download the photos if you want a closer look. 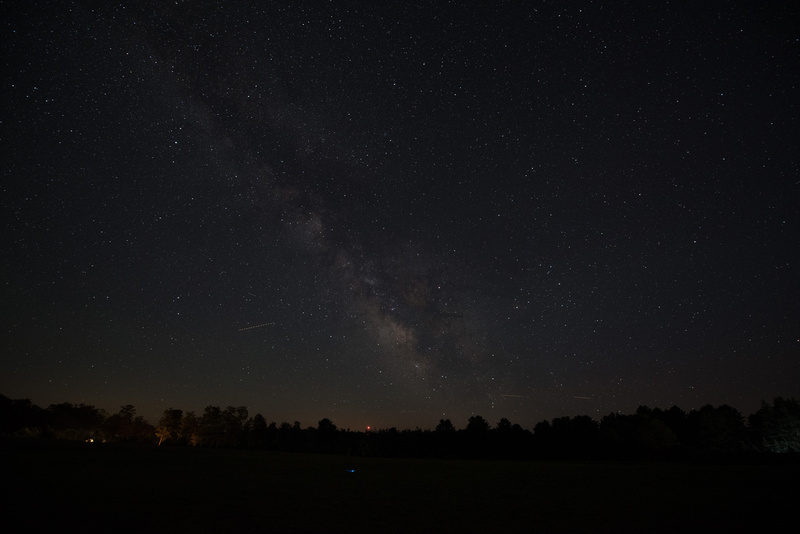 In my previous tests of the Nikon and Tamron I noted that the Tamron seemed to perform slightly better.  After these new tests, I have to temper that statement.  The conditions could not have been more different between the two test environments; full moon vs pure darkness.  When photographing the Milky Way, the Tamron fared just slightly worse.  After looking back through the images, the Tamron photos are noticeably darker than Nikon's.  The light levels across the Tamron are much more even, but everything is darker.  After applying the lens correction profiles, the Nikon is still noticeably brighter.

The DXO mark tests confirm that the Nikon does gather more light than the Tamron.  According to DXO, the Nikon is rated at 3 TStops while the Tamron is rated at 3.3 TStops.  If you are unfamiliar with TStops, I'll explain.  Basically TStops measure the actual amount of light that passes through the lens.  Normally, the fStop and TStop should align.  I.E. an f/2.8 lens transmits T/2.8 of light.  However, most lenses don't work that well.  In this case, the Tamron is actually a 1/3 Stop darker than the Nikon.  Watch Tony Northrup's TStop video for more information.

Each lens performs very well!  Honestly, it's almost impossible to see the difference between all three lenses.  With that said, the Rokinon is the winner here.  If you want to see some bad coma, check out the Sigma 35mm Art at f/1.4.  The stars look like they've all grown wings! 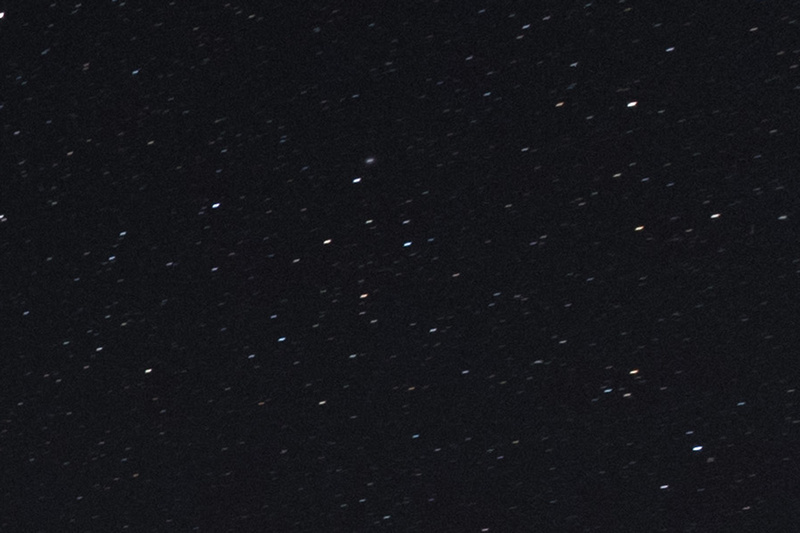 I've been doing a lot of research and testing of Amp Glow in my older Milky Way photos.  It's one of the most annoying problems I've dealt with.  In my experience, amp glow would be visible in the bottom corners of my images.  It was a hideous purple noise that tended to ruin image quality.

I've used the Rokinon 14mm for almost all of my Milky Way photos to-date.  As we saw, it has terrible vignette.  This vignette stops light from reaching the corners of the camera's sensor.  This increases the level of grain and amp glow present in the photos.  Now that I have the Nikon 14-24mm, I expect this issue to be mostly resolved.  However, I wanted to put that hypothesis to the test.

So, I captured some images that would intentionally show amp glow.  The sensor was very warm from shooting all night, I underexposed the photos, and I brightened them significantly in post-production to accentuate the problem.  The slideshow below shows the amp glow examples.  You'll want to pay special attention to the lower corners of the photos.  Use the arrow keys to go from slide to slide, so that the thumbnails disappear.  Alternatively, you can visit the Amp Glow gallery and download the photos for a better look. 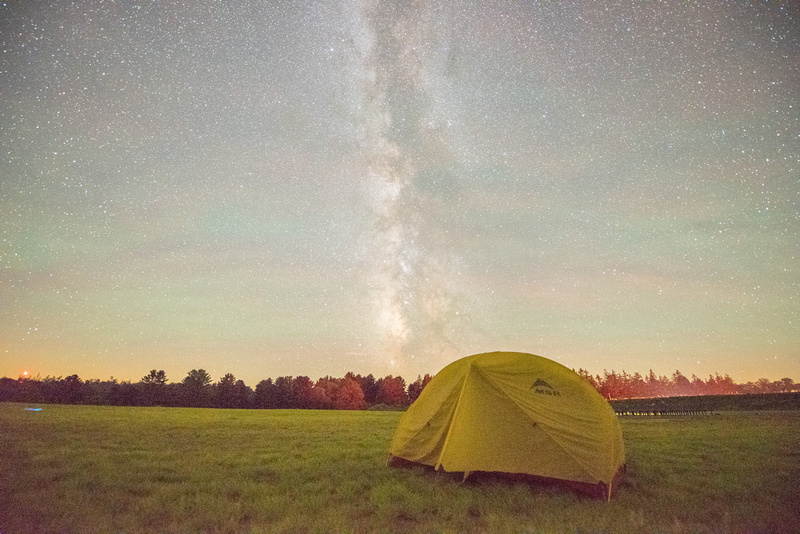 Clearly the Rokinon has the worst amp glow, the lower corners are much more magenta.  The Tamron and Nikon seem to have the same amount of amp glow.  This proves my hypothesis.  As light hits the camera sensor, it provides data for the final image.  This data overwrites the underlying sensor noise and amp glow.  Therefore, when less light is able to reach the sensor, the appearance of grain and amp glow is more apparent.  I think of it like a painting.  If less paint is put in the corners, than the canvas texture and color will show through more.  In this case, the canvas is the sensor's heat and noise levels.  Obviously this is a very simplistic definition, the whole process is much more complex.

Thankfully there is a simple workaround for the Rokinon.  Take a longer photo!  My new process for taking Milky Way photos is to do a 4 minute exposure for the foreground.  This drastically reduces the noise in the image and seems to eliminate amp glow too.  However, the stars will be blurred in the sky.  Therefore, I use a star tracker.  This device rotates the camera around at the same speed as the stars, allowing for much longer exposures without star trails.  Click here to read more about Star Trackers.

I've only ever done a dark frame subtraction on my Rokinon photos, so I was interested to see how this process would work on the Nikon and Tamron.  If you aren't familiar with a dark frame, it's pretty simple.  After taking your normal photo, put the lens cap on and take an identical photo.  This 'dark frame' will now only capture the sensor's noise and heat levels.  The dark frame can be brought into Lightroom or Adobe Camera RAW and edited alongside the normal photo.  Once each photo has the exact same edits and settings, they can be loaded into Photoshop.  From there, put the dark frame as a layer above your normal photo.  Change it's blending mode to Subtract.  This will remove any Hot Pixels and remove the purple / red amp glow color.  In my experience, the image would always become much more green after this process.

Before I continue, yes, you should take multiple dark frames and use special software to do the processing.  Check out any astrophotography forum for more information on Darks, Flats, Bias, and Light frames.  However, this makes a relatively simple workflow much more time-consuming and complex.  For the average photographer doing wide-angle nightscapes, this is overkill. 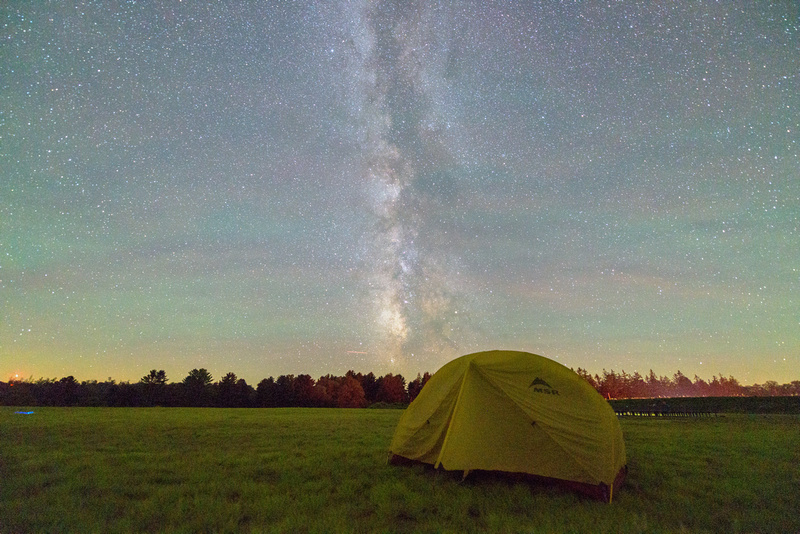 As expected, the Tamron and Nikon lenses perform very well.  Performance wise, they are virtually identical at night.  Although I was surprised at just how much difference that extra millimeter in focal length makes!  With that said, I would recommend the Tamron over the Nikon.  The price is definitely a major factor, you can save at least $700 by going with the Tamron!  During the day, the Tamron actually out-performs the Nikon.  I've seen that the front element has better moisture resistance and handles lens flare a lot better.  I can tell you from personal experience that the flare is a big problem with the Nikon.  It seems no matter where or when I'm shooting, I'm always getting some annoying flaring on the Nikon.  The Tamron also has built in Vibration Control, a nice feature that the Nikon is lacking.  So, unless you really need that extra 1mm, I'd recommend the Tamron over the Nikon.

Let's not forget about the Rokinon though!  If you are a competent editor, you can definitely make the Rokinon work. You will need to adjust the White Balance, manually fix the vignette, perform more noise reduction, and tweak the color balance.  That's just to get the image up to the same level as the Nikon or Tamron!  If you're just getting into astrophotography and want a cheap wide angle lens, you can't go wrong with the Rokinon!

Each lens is a great option for Milky Way photography.  If you are a hobbyist, you probably won't be spending $1,000+ for a lens anyway.  That makes the Rokinon an attractive option.  It has minimal coma and it's pretty sharp for a reasonable price; it will get the job done.  The Tamron is a fantastic option for pretty much everyone else.

Regardless which lens you decide to get, it ultimately comes down to the photographer behind the camera.  If you want to learn more about Milky Way photography, check out my Milky Way Tutorial.  This covers everything you need to know!  You can also check out my YouTube page for some video tutorials on editing the Milky Way, including: Removing Hot Pixels, Fixing Amp Glow, Photo Stacking to Reduce Noise, and a general Milky Way editing video.

Finally, my biggest tip for getting better Milky Way photos is to use a Star Tracker!  I purchased this device before my 2017 roadtrip and was blown away by how much better my images turned out!  No more Amp Glow, no more ugly grain, better colors, and more detail!  This will truly take your Milky Way photos to the next level!  Click here to learn more about star trackers!

pol(non-registered)
Personally, I have had great success with the Rokinon lenses for astrophotography. They offer sharp images and a wide aperture for capturing the night sky. However, I have also heard great things about the Nikon and Tamron options as well. It ultimately comes down to personal preference and what features are most important to you.
purple cv customer reviews(non-registered)
I have a Nikon D750 and I use it for astrophotography. In my opinion, the best way to go is to get yourself a nice wide lens with a large aperture.The Tamron 15-30mm f/2.8 is an absolutely amazing lens and will cover all your needs. It's also very sharp wide open, which makes it great in daylight as well as at night. The only thing is that it's a bit heavy and expensive.
No comments posted.
Loading...
Subscribe
RSS
Recent Posts
Fornax LightTrack II Review Focus On Stars - Wide Angle Bahtinov Mask | Review Kase Filters AstroBlast Review Kase Filters Bahtinov Mask Review Dithering with a DSLR and Star Tracker Nikon D780 Review - Astrophotography A Guide to Astrophotography Filters Choosing your first Dedicated Astro Camera Pairing a Camera with a Telescope / Lens William Optics High Latitude Base Review
Archive
January February March April May June July August September October November December
© Peter Zelinka
User Agreement
Cancel
Continue