For my last Colorado hike I wanted to do a backcountry trip.  The area around Crested Butte provided endless possibilities.  I learned of a route through the mountains that would take me from Crested Butte to Aspen.  I was unable to find a good paper map, so I decided to wing it.  At 6pm I left Crested Butte and drove up towards Gothic.  The forest was dark and ominous, but beautiful.  I looked back down the valley and saw a rainbow forming above the mountains, the road was too narrow to stop for a photo though.  I arrived at the West Maroon trailhead by 7:30pm and decided to spend the night in the car.  As I read my book, The Dharma Bums, I watched the clouds turn pink in the last rays of sunshine.

I didn’t sleep much at all that night.  It was cold and cramped inside the car.

By 8am I was on the trail.  The morning light was bursting through an endless field of wildflowers.  They glowed yellow, red, purple, white, and blue.  I soon came to a fork in the trail.  A small wooden side reading "West Maroon Trail" was shaped pointing towards the left, so I went that direction.  I had heard this was a popular trail, so I was surprised to see it so overgrown.  Alarm bells went off that I was going the wrong way, but the sign was pointing in this direction.  I started a steep climb up the hills, surrounded by thousands of wildflowers.  This still didn’t seem right, I should’ve taken that other fork.  After an hour of hiking up the mountain, the trail dead-ended in the tundra.  Perfect...

At least I had the high-ground!  From my perch, I was able to see the valley stretching out below me, and create a good mental map.  I even saw the mountain pass that I would need to hike up.  After about 10 minutes of hiking through the tundra I found another trail.

When I reached the new trail I encountered some hikers.  Thankfully, they had a map.  Eventually I got back to the correct trail and restarted my ascent to West Maroon Pass.  The climb up was intense, very steep and easy to slip.  Finally I reached the summit, only to find dozens of people were relaxing at the top!  Never before have I seen so many people on top of a mountain, it was like Grand Central Station.  After a nice chat with a white water rafting guide, I began the descent to Maroon Bells. 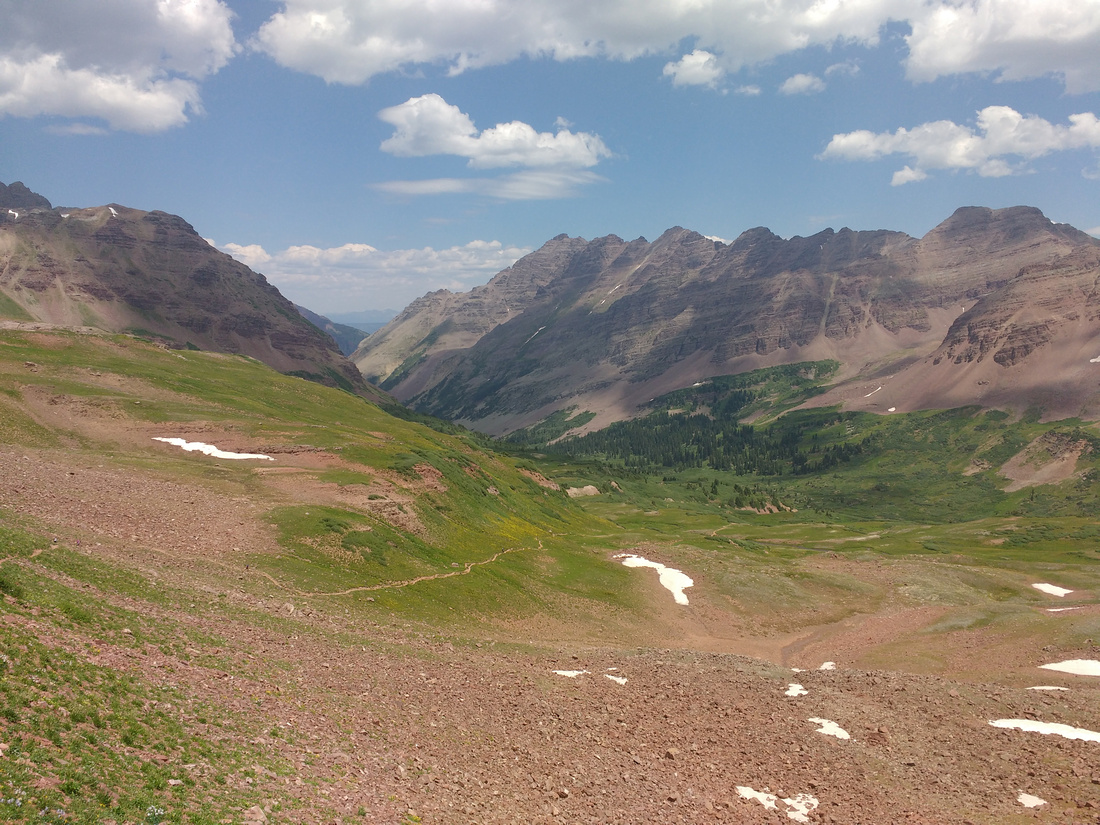 After a long, grueling hike I finally came to Maroon Lake.  It was packed with tourists.  Annoyed, I set out to find a campsite for the night.  I soon found one in a pine forest and setup my hammock.  The flies were terrible, constantly digging into my skin.  Thankfully they couldn’t get me when I was wrapped up in my hammock. 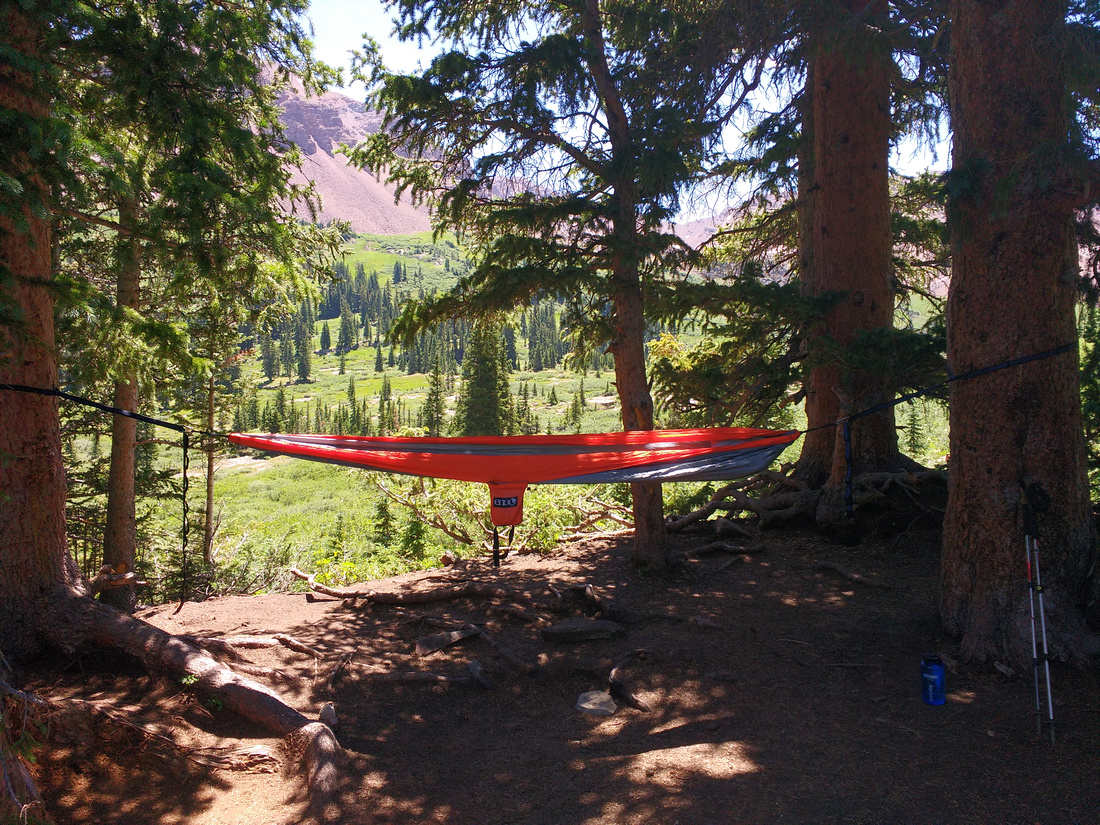 At 6pm I had a great lasagna dinner and a Clif bar for dessert.  I made sure to pack up my Bear Can away from camp and then headed back to Maroon Lake for sunset.

I watched as the tourists took hundreds of selfies and family photos, when everyone suddenly started yelling.  A bear was walking around on the far side of the lake.  Too bad I didn’t have my telephoto lens. 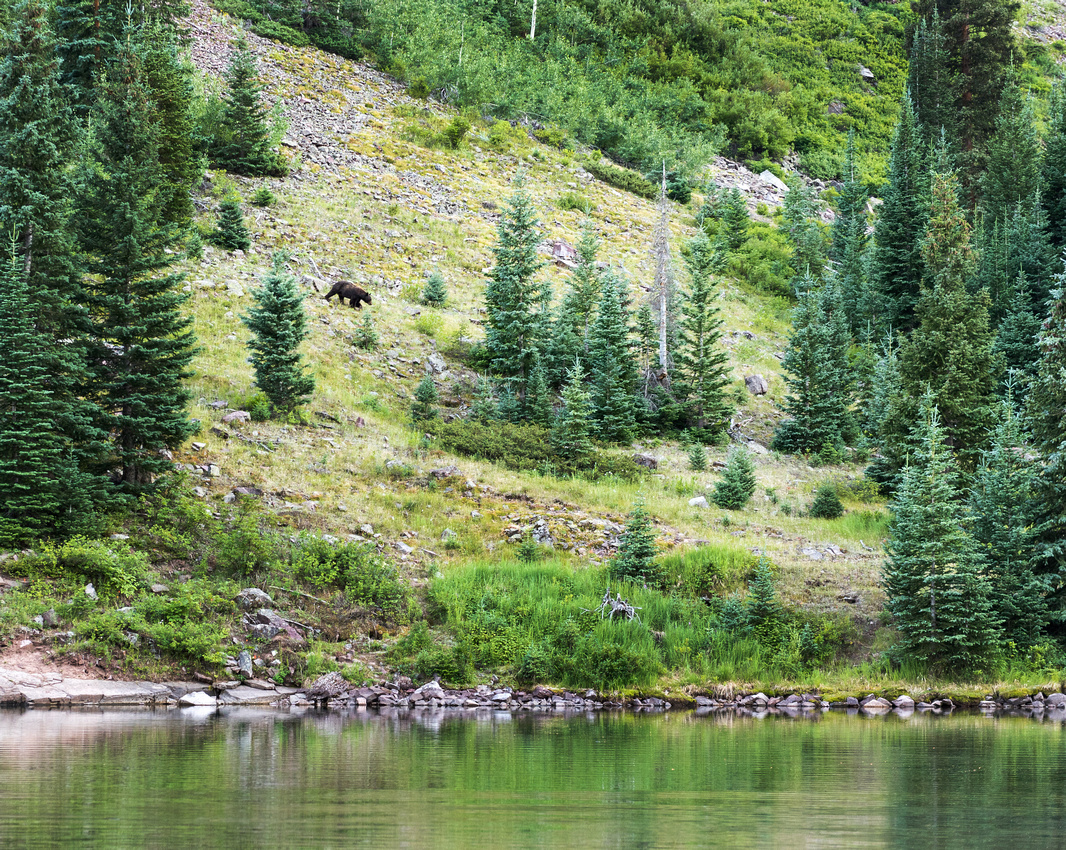 The temperature began to drop and I ran back to my hammock to grab my down jacket.  When I arrived at camp, I saw my bear can sitting at the bottom of the hill.  That's not where I left it...  I made some noise to alert any nearby animals, then went over to inspect it.  There were gouges taken out of the bomb-proof plastic and the canister was wet with slobber.  Clearly the bear must have found it.  Thankfully he gave up rather quickly and left before damaging anything else.  I hoped he wouldn’t return later in the night... 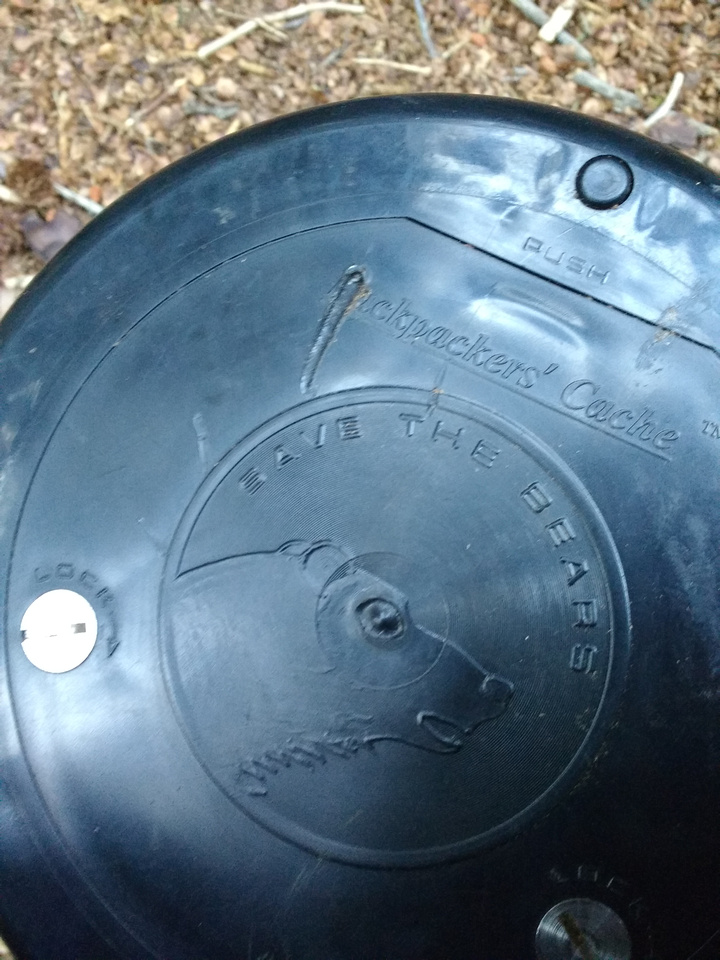 I spent the next hour back at out the lake, taking photos.  At dusk, I returned to my sleeping bag to catch some sleep before heading out to photograph the Milky Way.  At midnight my alarm went off.  As I opened my eyes I saw a dark forest canopy swimming in stars.   I crawled out of my warm down sleeping bag and headed to the lake shore.  Surprisingly, 3 other photographers were already there. After talking with them I realized I had already been following the one photographer on Instagram! 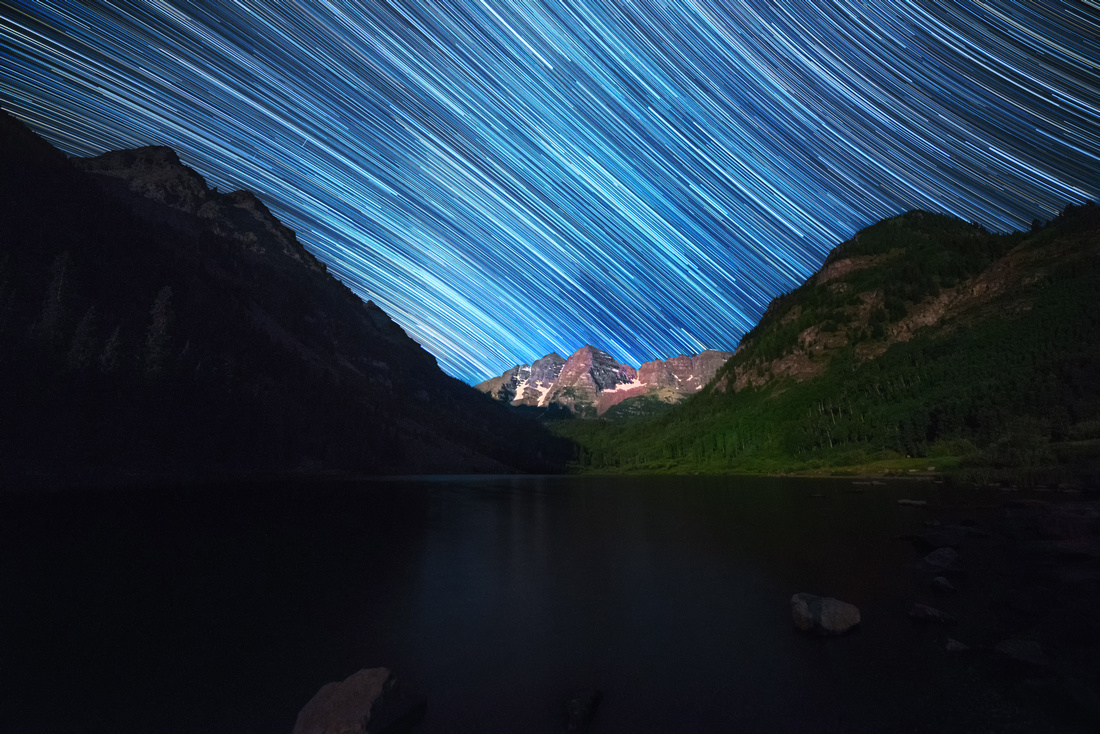 We spent a few hours talking while our cameras clicked away.  Since I was doing a Star Trails image, which takes hours, I left my camera on the lake shore.  I figured no one would steal it.  At 2am I headed back to my hammock to get some sleep, knowing I had to be back soon for sunrise. It got very cold.  At 5am I headed back to the lake shore to check on my camera and prepare for sunrise. 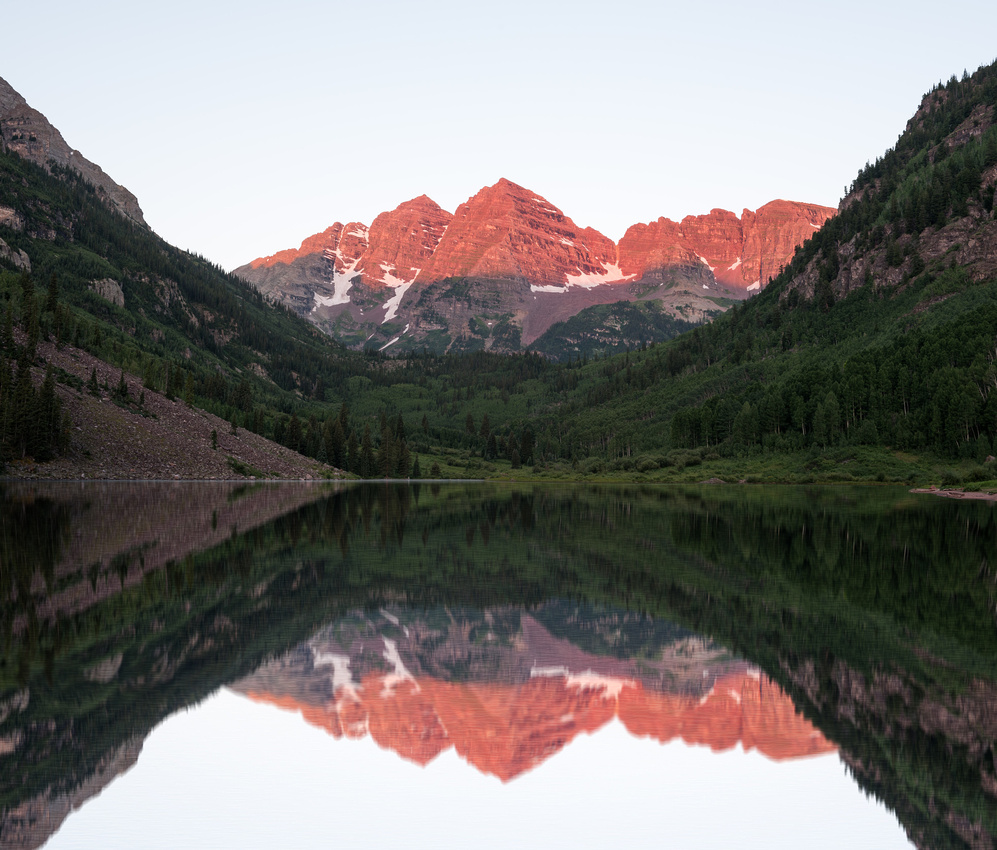 With sunrise wrapped up, I now had a very long, arduous hike back over the mountains.  I felt horrible the entire way.  Must have been the combination of dehydration, lack of sleep, lack of food and the strain of the long hike.  I truly thought I would not make it back to the car.  I had to stop at one point and setup my hammock to rest.  At least I didn't have to worry about taking another wrong turn and going miles off course.  I finally made it back to the car around 3PM, barely.  I was happy to have finished the rough hike and ready to move on.  All I could think about now was a big meal, a hot shower, and a warm bed to sleep in. 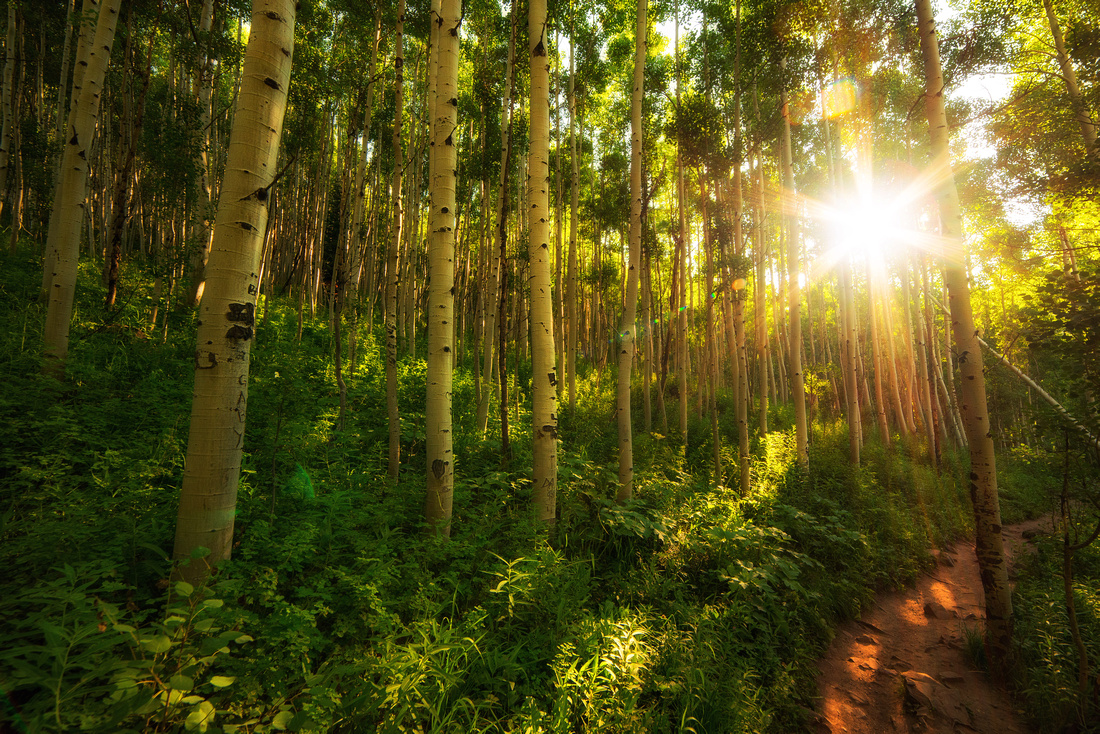 The drive back to Crested Butte was stunning in the late afternoon light.  Once I finally got cell reception, I started looking for lodging in town.  I couldn't wait to get a hotel room and shower!  It must have been over a week since I'd last slept in a real bed.  I smelled horrible, was completely exhausted, and I was starving.  Of course, every single hotel and hostel in town was completely booked for the night.  Great...

I had a massive burrito for dinner, at a great little restaurant in Crested Butte.  Then I drove up into the mountains just outside of town, where I knew of a dispersed camping spot.  I still really wanted that shower...  So I crashed through the brush down to the river and washed my face with the cool water.  I guess that was the best I could hope for.  Then I set up my tent and passed out.

The next morning I drove through Kebler Pass, home to one of the largest colonies of Aspen trees in the world.  I would love to come back here in the fall!

My next destination is Grand Teton National Park.