After spending two weeks in Port Angeles, waiting for my broken phone to be repaired, I received an email that my phone was being shipped to Seattle.  I had actually become quite comfortable in Port Angeles, it had almost started to feel like home.  I even had a schedule for the first time in months.  I spent my last night in town Couchsurfing with my new friend Lonnie.  He owns quite a bit of property and has hand-made a number of cabins for Couchsurfers to use.  Lonnie has hosted over 200 Couchsurfers from all over the world!

While I was there I met 3 girls from England, Canada and Australia.  They were hitch-hiking down the coast, with the goal of reaching Los Angeles by mid-December.  It was wonderful to hear their stories from across the world while we sat out on Lonnie's patio.  Soon the full moon came up and we were able to get a close-up look at it with my telephoto lens. 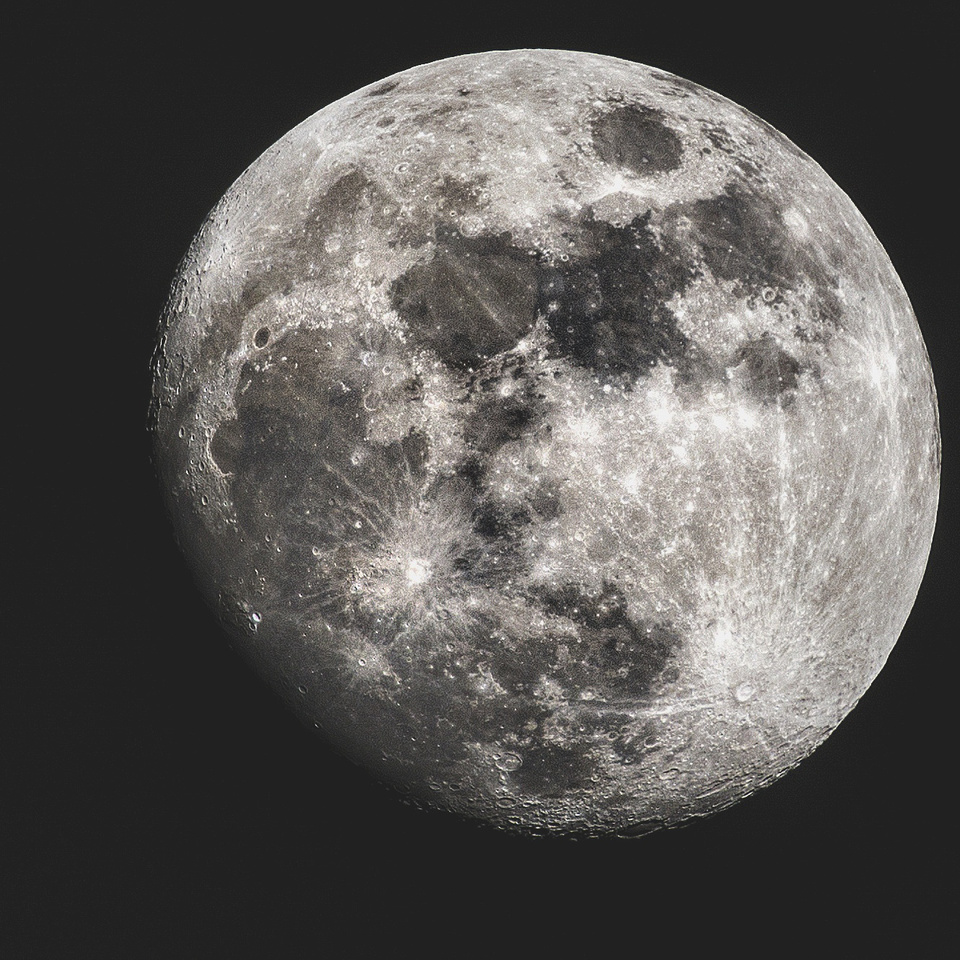 The next morning we got to play with the puppies!  They were a lot of fun! 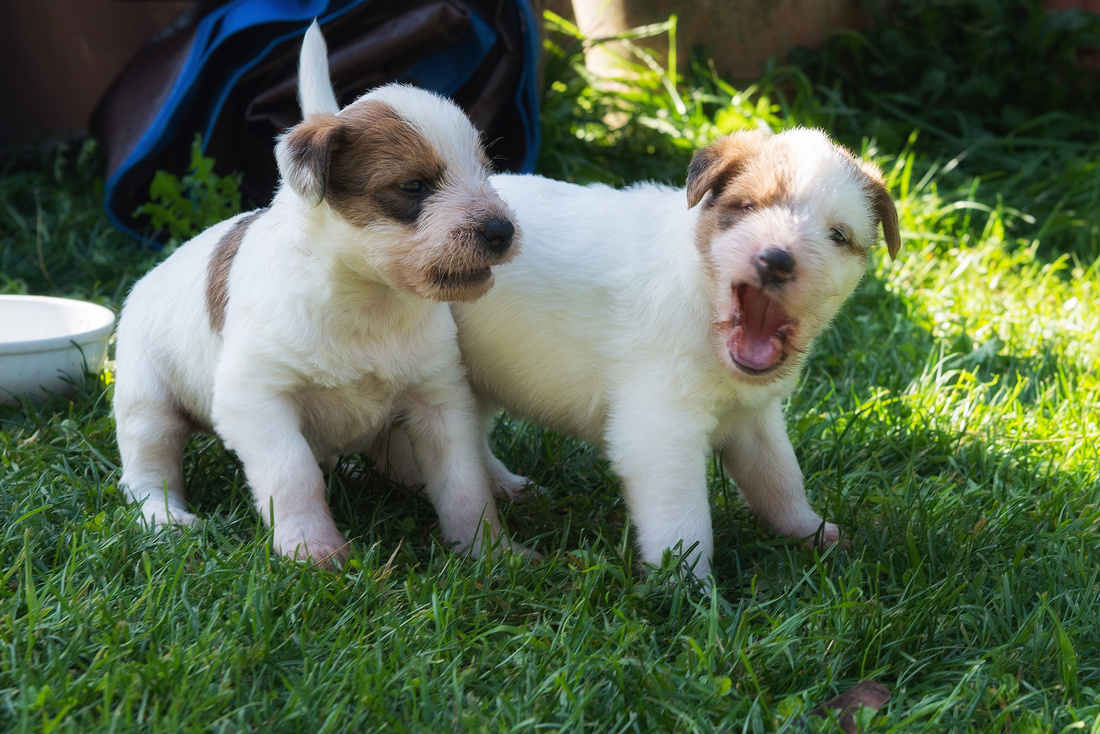 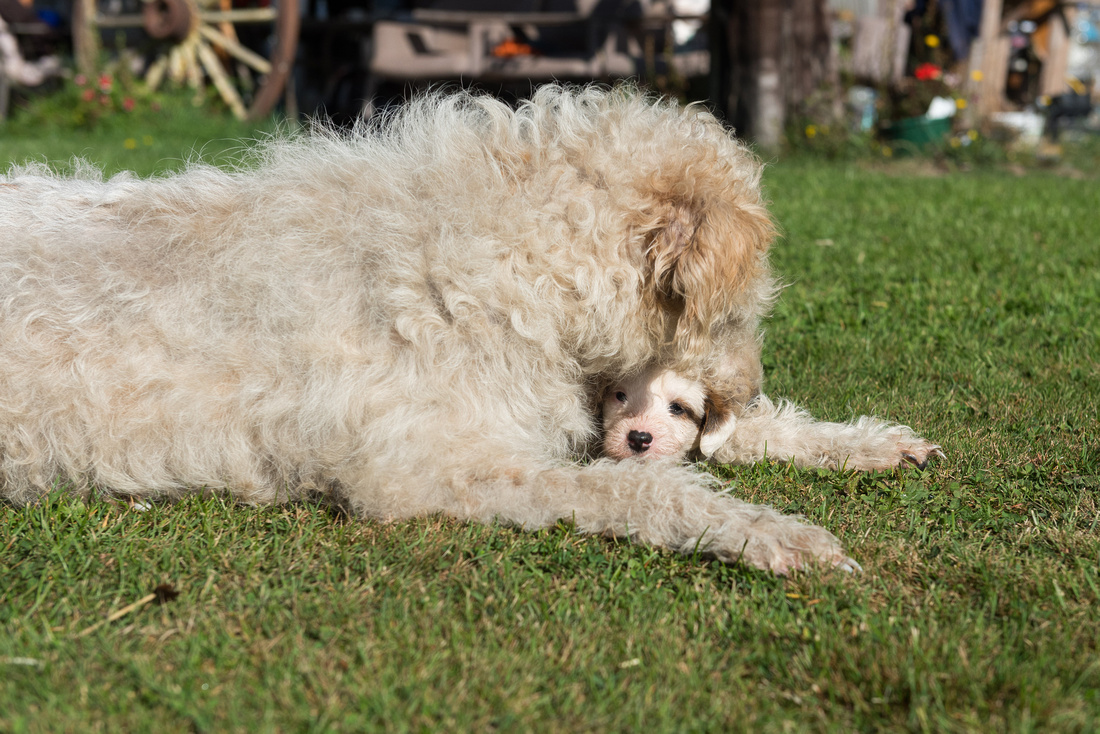 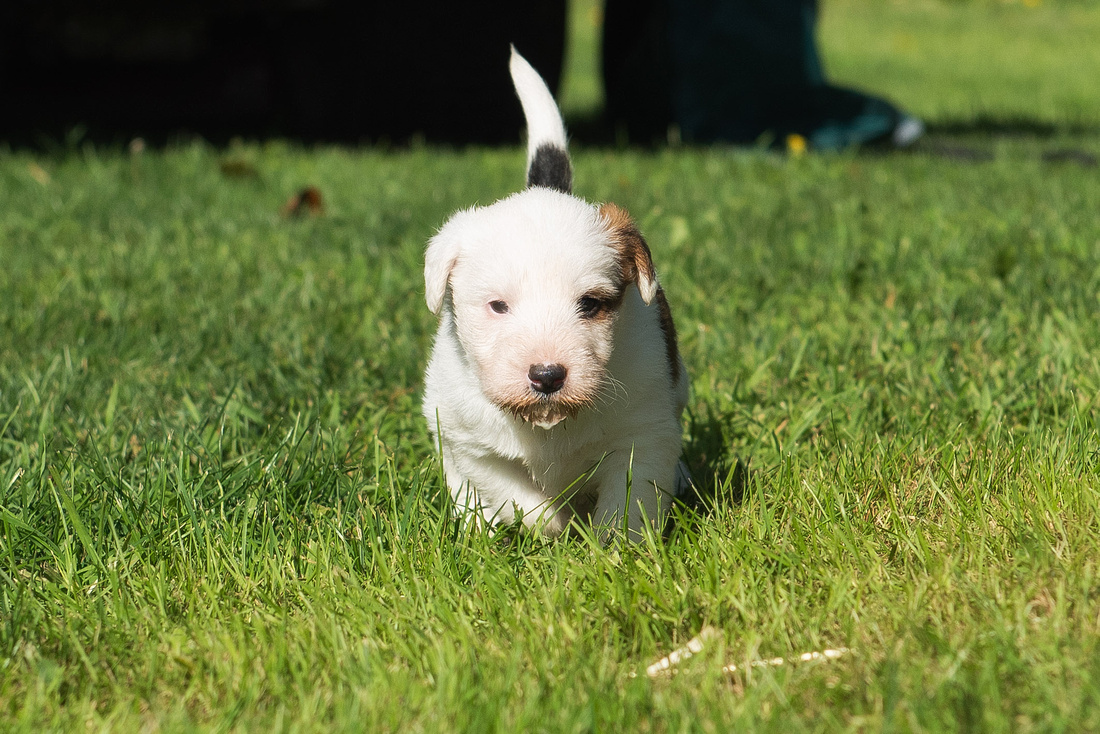 After playtime we all headed our separate ways.  The girls were going to spend the day hitching down Highway 101, while I was headed to Seattle. 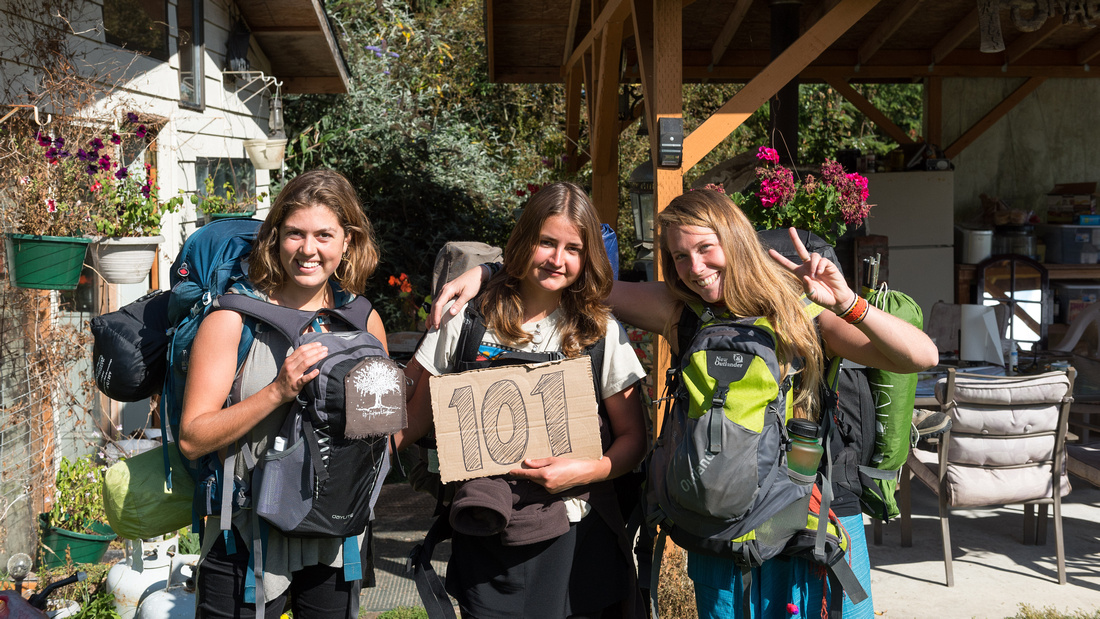 I had a few goals while in town.  Get a nice photo of the city, visit Luna Sandals, and pick up my phone.  Once I arrived in the city, I parked my car downtown and wandered around.  I felt so out of place.  After spending 3 months in the wilderness I could not believe the size of the buildings or the amount of people walking around.

At sunset I drove to Kerry Park to get a nice view of Seattle.  Of course, the tiny park was completely filled with people.  I ended up spending the night with the millionaires... by sleeping in my car on the street outside their houses. 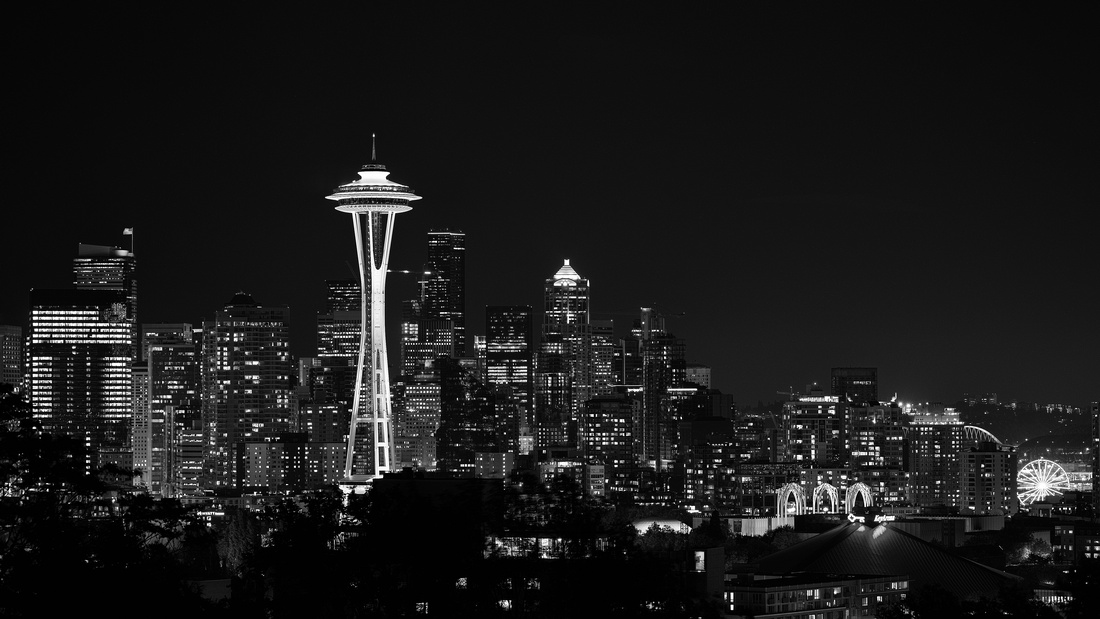 My time in Seattle was a nightmare.  I absolutely hated driving around the city.  Hundreds of one-way streets, no parking, thousands of cars, and pedestrians everywhere.  Without my phone, things became much more difficult.  This was my least favorite part of the trip and I realized just how much I love being out in the wilderness.  Thankfully my time in the city only lasted 2.5 days.

With my phone finally back in hand, I was ready to enjoy the mountains again.  I met up with an old friend from Canfield and we hiked up Granite mountain, about an hour outside Seattle.  Near the start of the hike I had another pair of sandals blow out on me.  The hike climbed over 3,000 feet, through pine forests, windswept rocks, and even some tundra.  Thankfully my bare feet were tough enough to withstand the rocky trail. 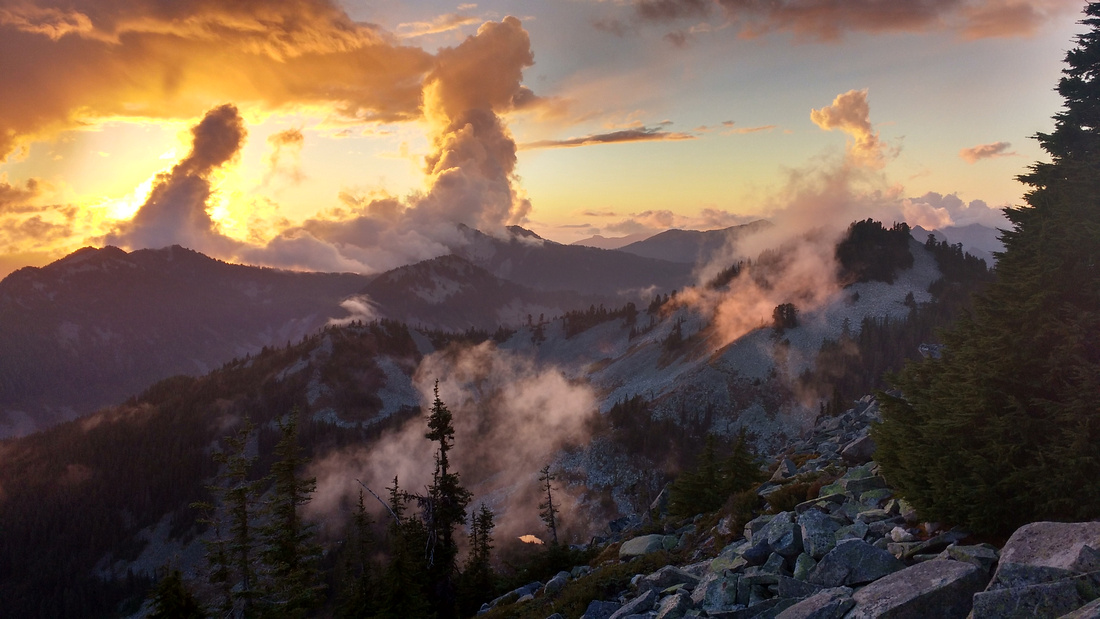 The next morning I stopped by Luna Sandals HQ, located in Seattle to get my sandals repaired.  After reading Born to Run and purchasing my first pair of Luna Sandals 4 years ago it was cool to finally visit them in person.  They had some really cool "artifacts" in the main lobby, including some legit tire sandals. 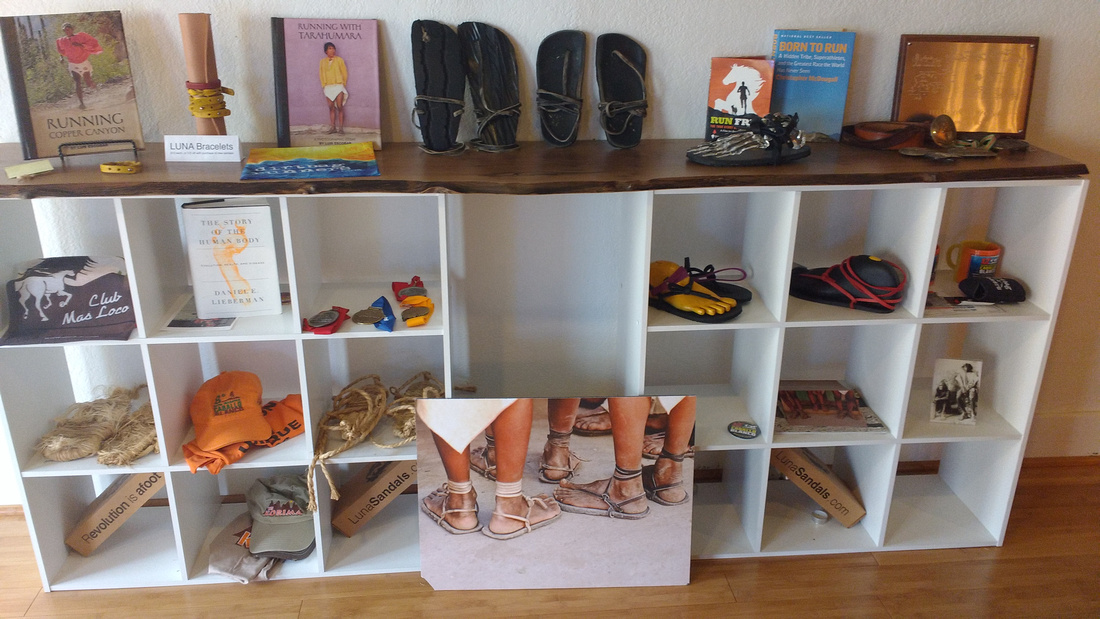 With my sandals fixed and my phone in hand, I was now ready to resume my roadtrip!  Next destination: Mount Baker wilderness area.

I had no expectations for this area, and was completely amazed.  As I drove up the road to Artist Point, a massive snow-capped mountain peeked through the trees. My jaw actually dropped.  I’d been waiting to see mountains like this for 3 months. 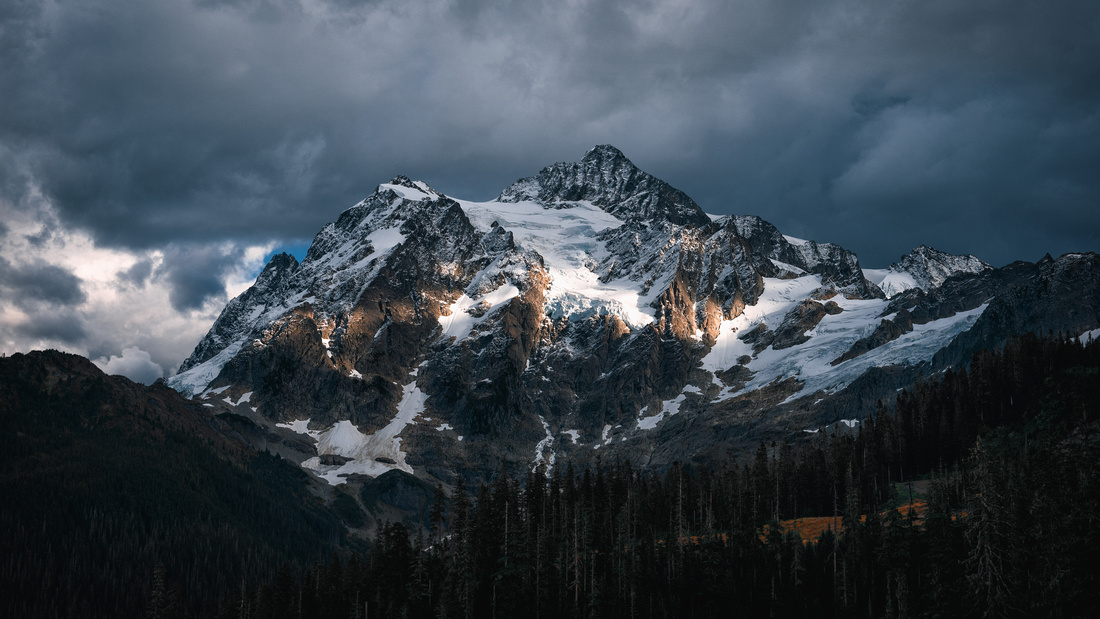 By 5pm I arrived at Picture Lake.  As I walked around the lake trying to find a good spot, I realized just how quickly weather in the mountains can change.  Within 5 minutes the mountain went from sunny and beautiful to completely shrouded in clouds. In another 15 minutes it started to pour.  I ran back to the car and headed further up the mountain.  I wasn’t going to give up over a little rain. 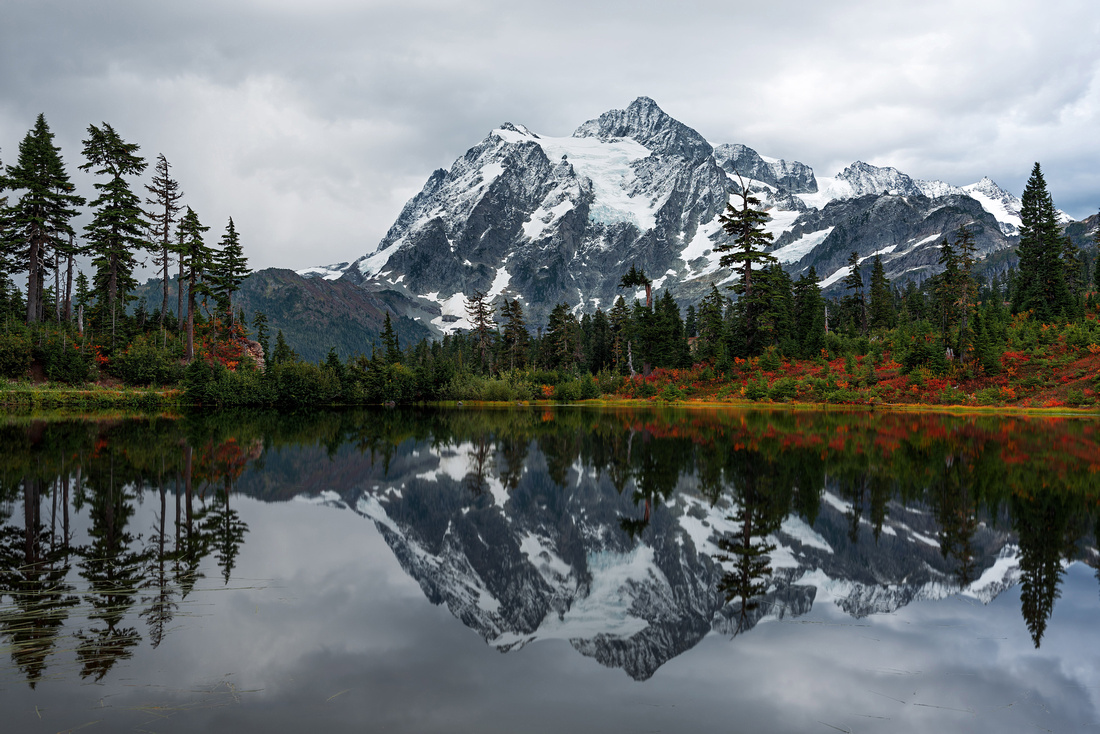 Picture LakeA cloudy afternoon at Picture Lake, high up in the North Cascades

As the sun began to set, the storm clouds were breaking up overhead.  Over Mount Baker though, things were just getting started.  For the next hour I hiked around Artist Point, completely in awe.  This was easily the most amazing vista on the trip, and the lighting was perfect.  The only problem was that there were 3 distinctly beautiful mountains, all in opposite directions.  I could only focus on one at a time, I really needed a clone!  Stormy afternoons seem to provide the best sunsets. 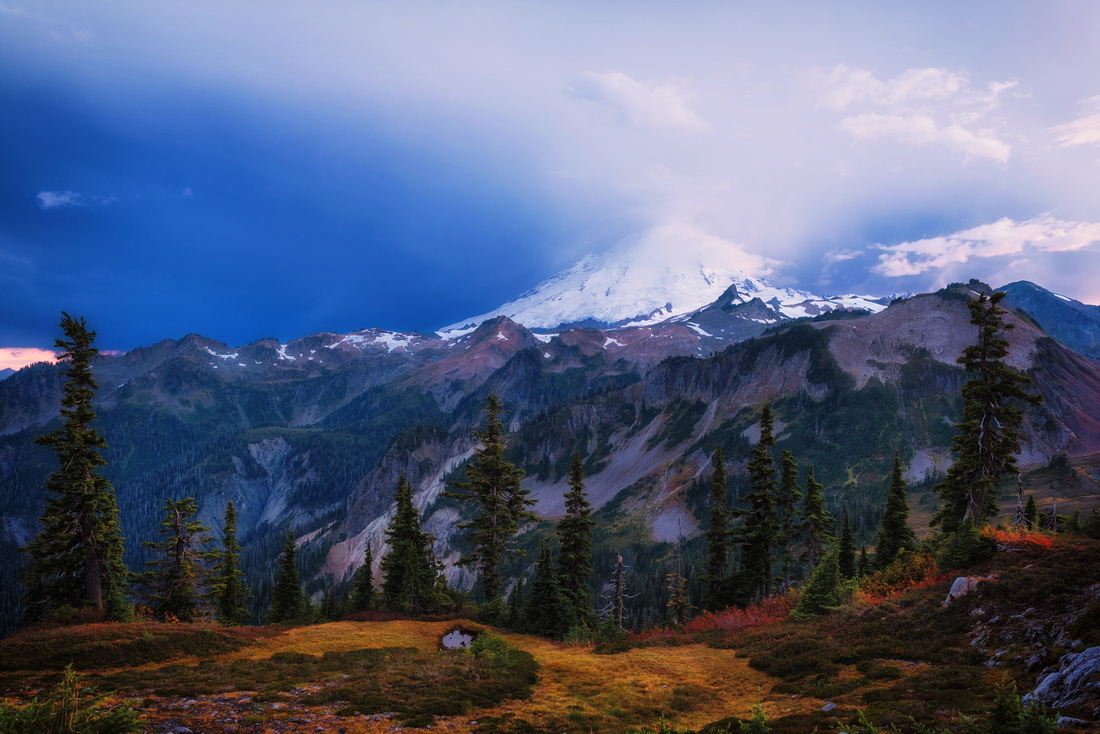 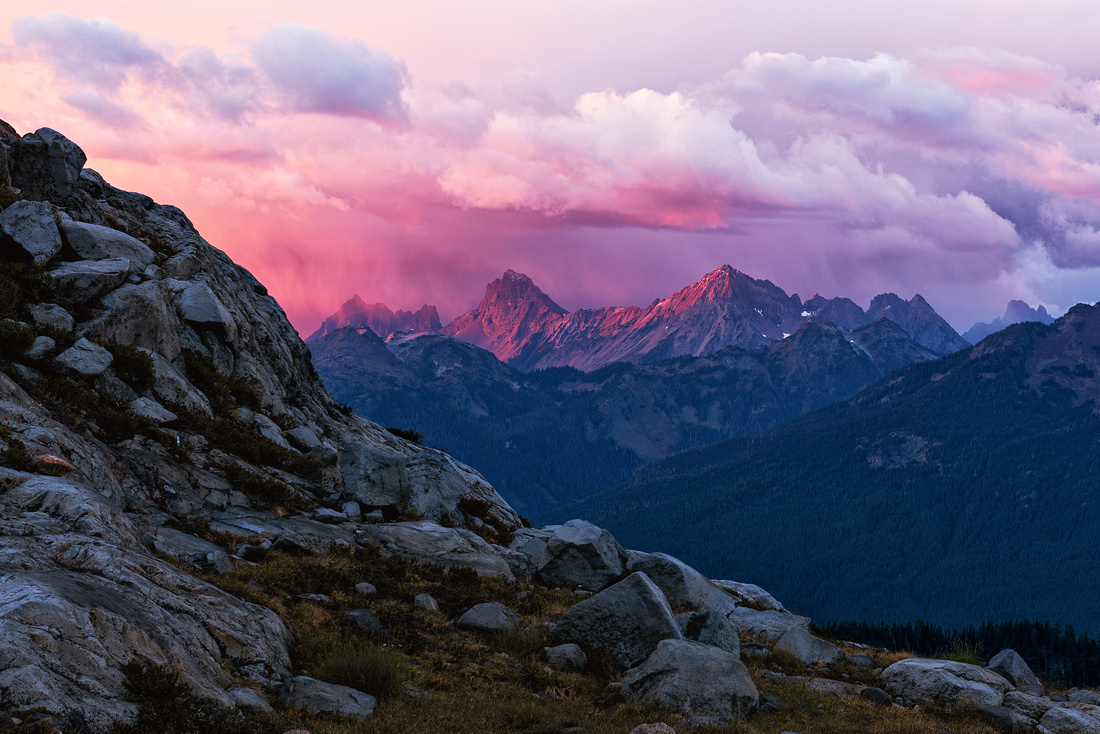 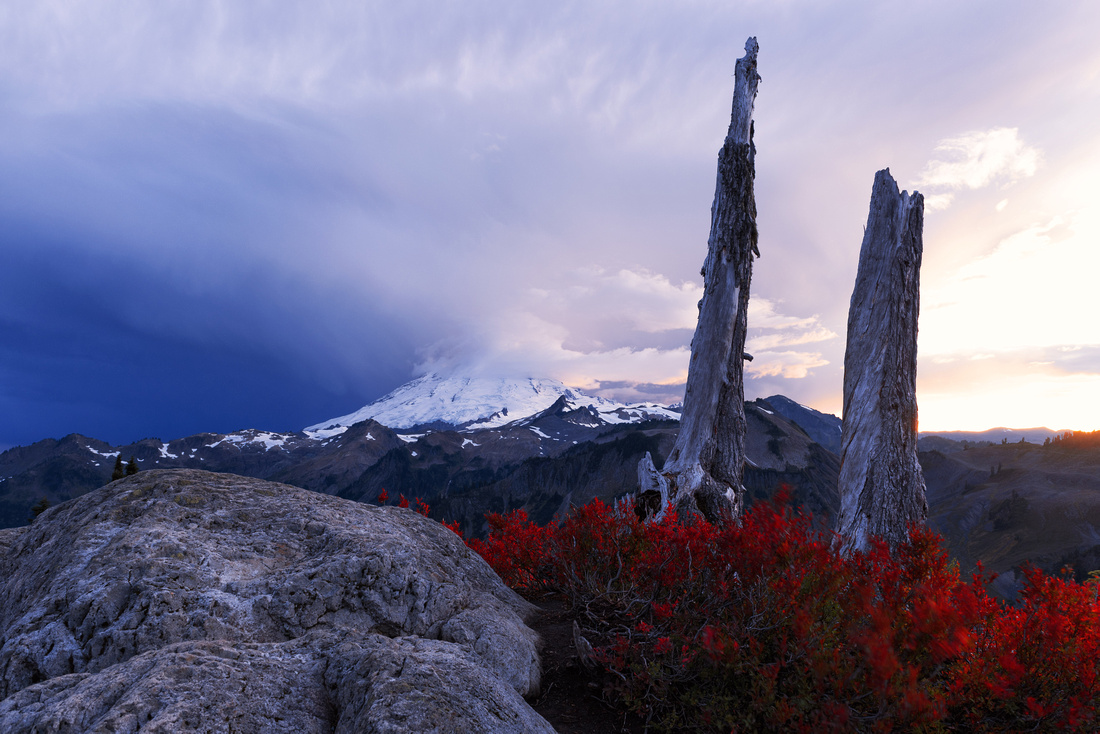 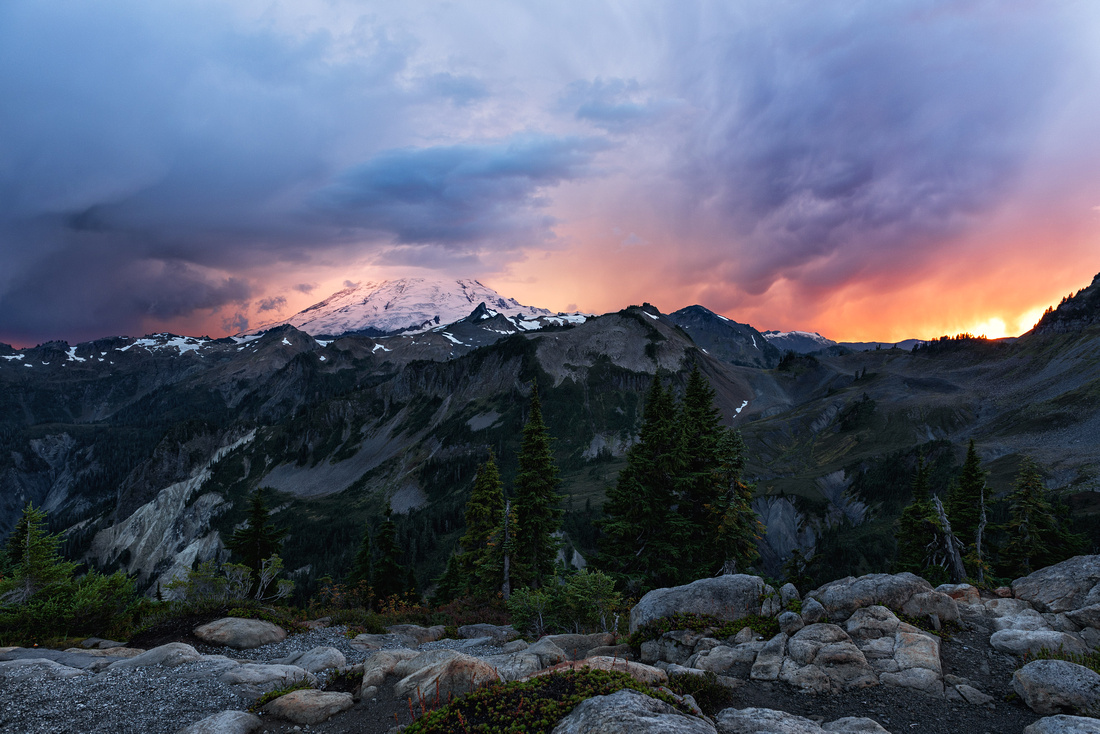 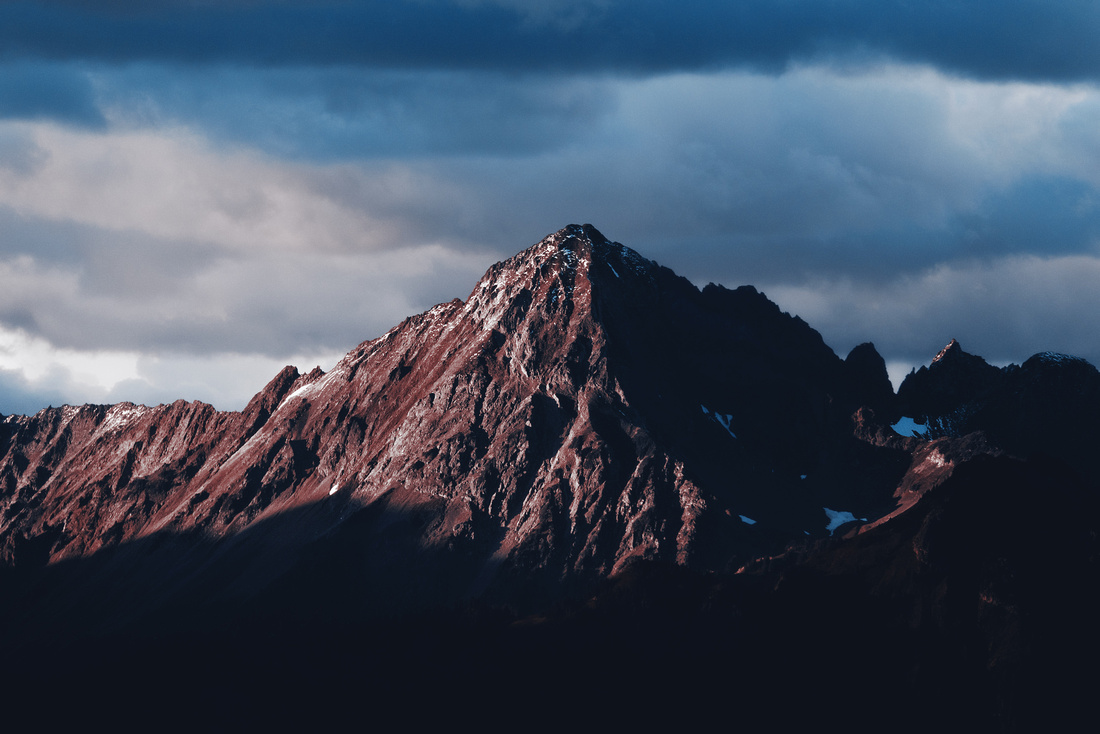 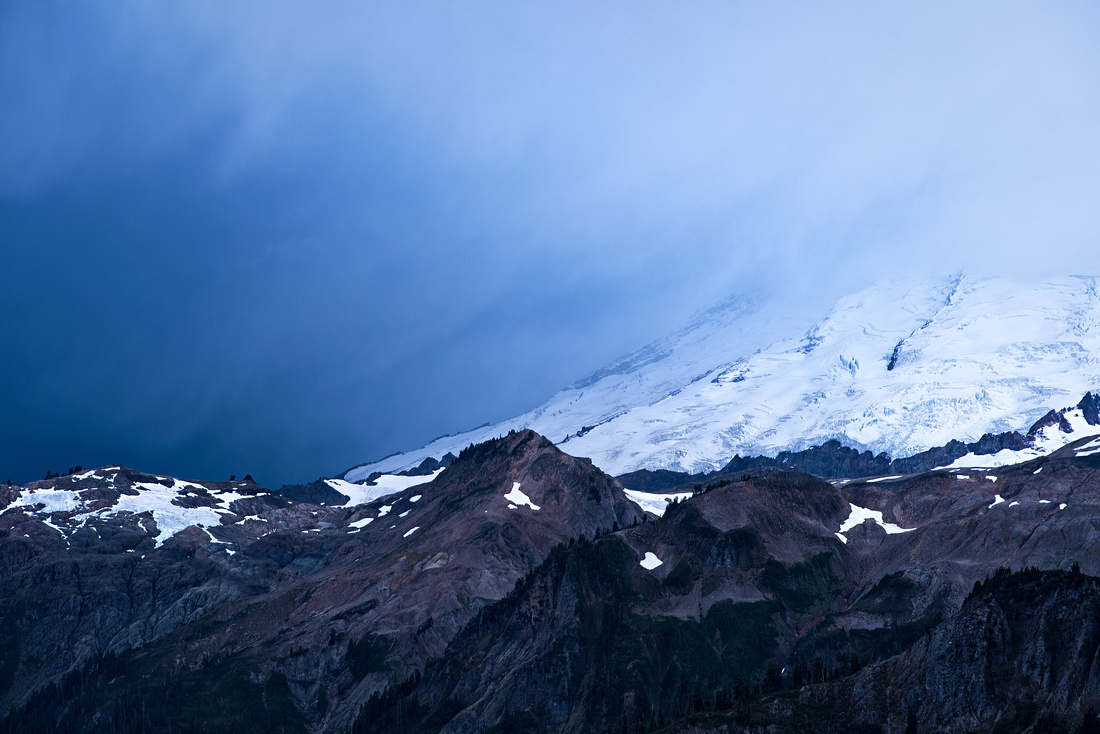 Once the sun had set, I wanted to try one more location.  I headed back to Picture Lake and waited for nautical twilight.  The stars were shimmering in the calm lake and the clouds began to roll in over the mountain range.  A car drove by in the middle of the exposure, which actually ended up creating any interesting photo. 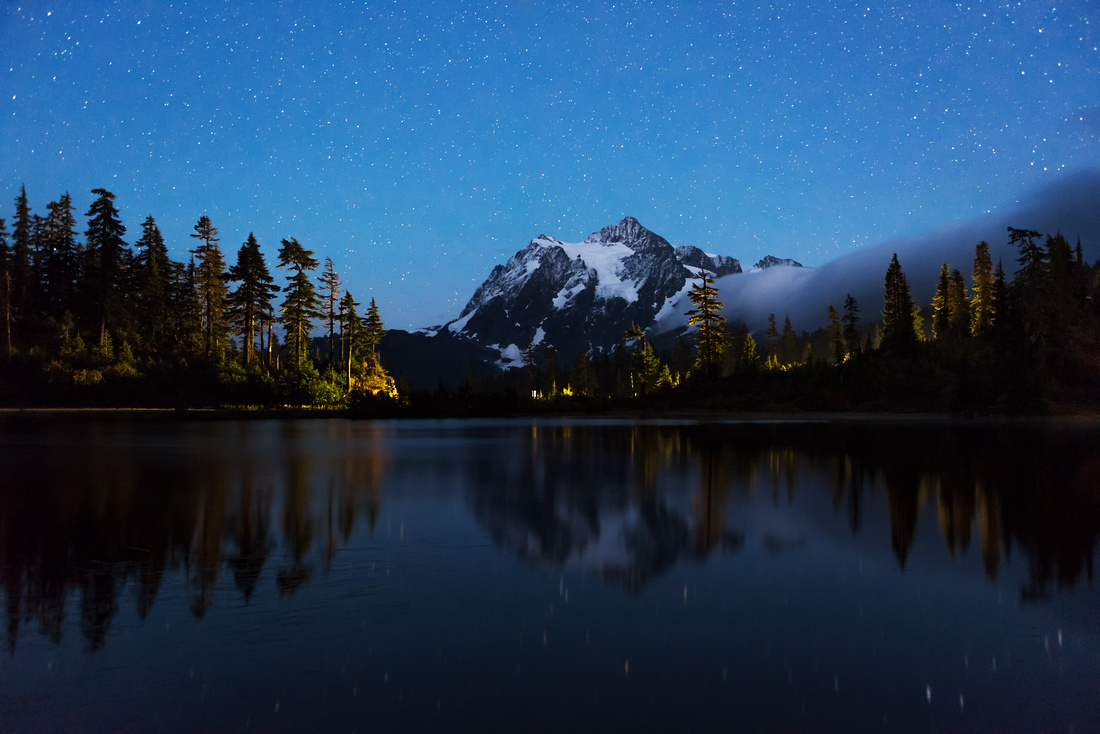 The next morning I drove back up to Artist Point and spent the day photographing the mountains.  It was a perfect day.  I even saw my first bald eagle of the trip!

These mountains reminded me of Skyrim and I was half-expecting a dragon to swoop down.  By 5pm the bright blue skies  were gone, replaced by dark, gloomy clouds.  A rainstorm enveloped the mountain peak.  I sat in my car and relaxed for a few hours, waiting for sunset to light up the mountains again...I hoped. 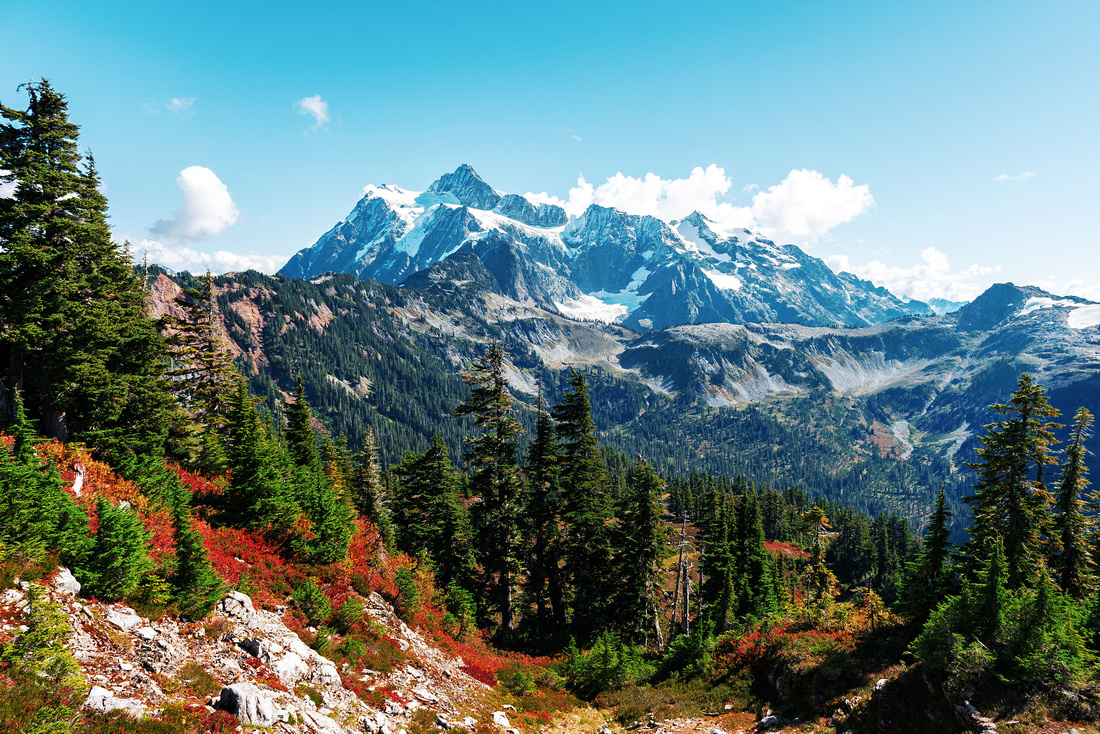 The storm got worse.  The rain turned to hail and began pelting the few remaining cars in the parking lot.  I was glad I hadn't gone on a dayhike.  Like magic, the western clouds suddenly broke up and sun came pouring through.  A rainbow started to form nearby.  As I sat in my car I saw the rainbow continue to grow, arching across the sky.  Then it became a double rainbow!  I ran outside in the pouring rain and took some quick photos.  I’ve never been so close to the end of a rainbow before, I could actually see it hitting the ground a few feet in front of me. 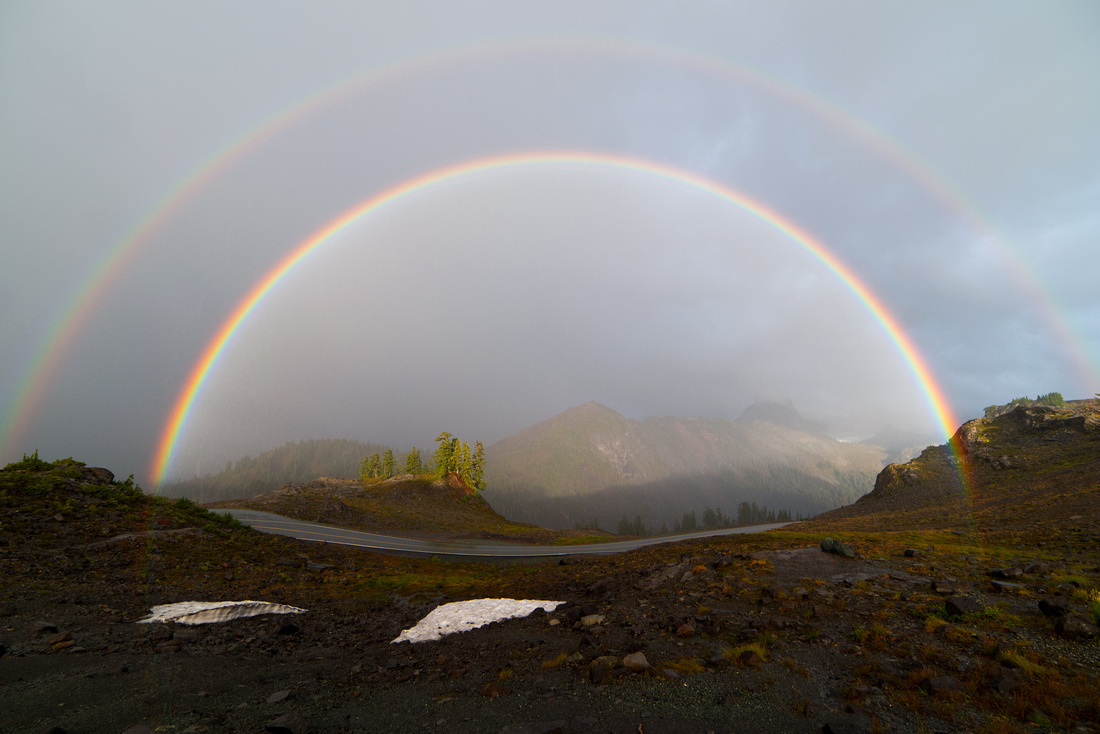 After the rainbow faded and the clouds had finally broken up it was time to venture out for sunset.  Unfortunately it was not as colorful as yesterday’s, but it was still beautiful. 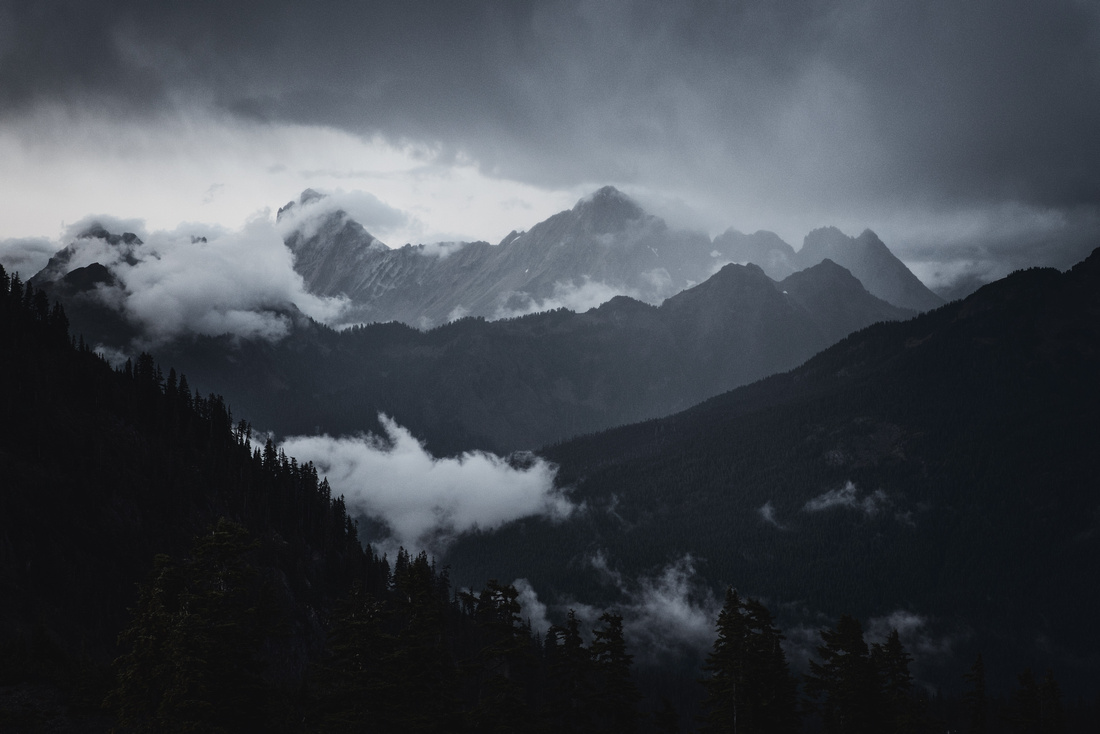 This was the perfect way to reset after spending a few days in the city.  I was happy to be back in my element and finally taking photographs after 2 weeks off.  I'll be spending the next week in the North Cascades area. 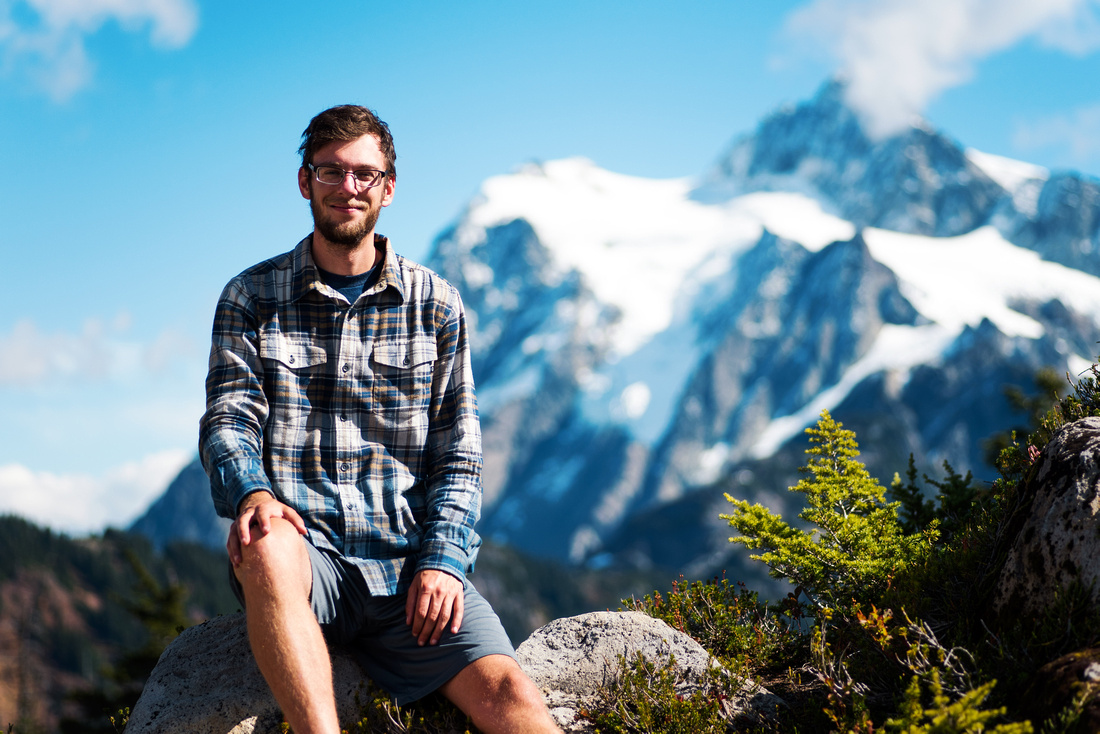