It’s been one hell of a day.

It started at 5:30am as I stepped outside my room at the Gerace Research Centre.  Light was just beginning to spill over the Eastern horizon.  I always loved that early morning walk, knowing that the day was about to begin.  I arrived at North Point just as color started to fill the sky, the sun still below the horizon.  My goal was to find the best vantage points to capture interesting photos of the sunrise.  This was now my 4th trip to San Salvador, and I wanted to get some different perspectives.  With the addition of a Nikon D750 and 14mm lens, I was able to achieve that goal.  In the photo below you can see North Point; the calm waters of Graham's Harbour on the right side and the powerful waves from the Atlantic Ocean on the left.  If you look closely, you can see the Gerace Research Centre on the right.  This is our home base on the island. 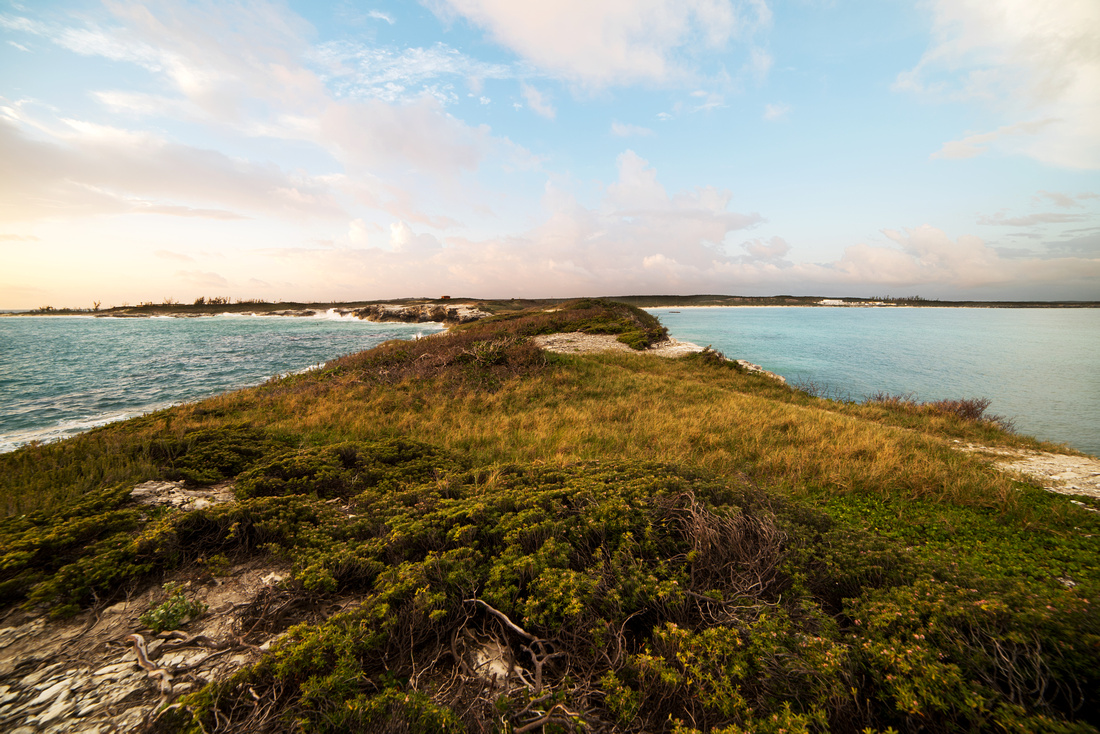 After shooting for 20 minutes I decided to utilize my Neutral Density Filters.  These allow me to blur moving objects (waves, clouds) to create a unique look.  These are a lot of fun to use at the beach!  Just as I was about to change lenses, I started feeling raindrops.  I looked overhead and just saw a few patchy clouds, then I looked behind me and saw a massive wall of black clouds heading my way.  It was like a bad omen over the peaceful waters of Graham's Harbour. 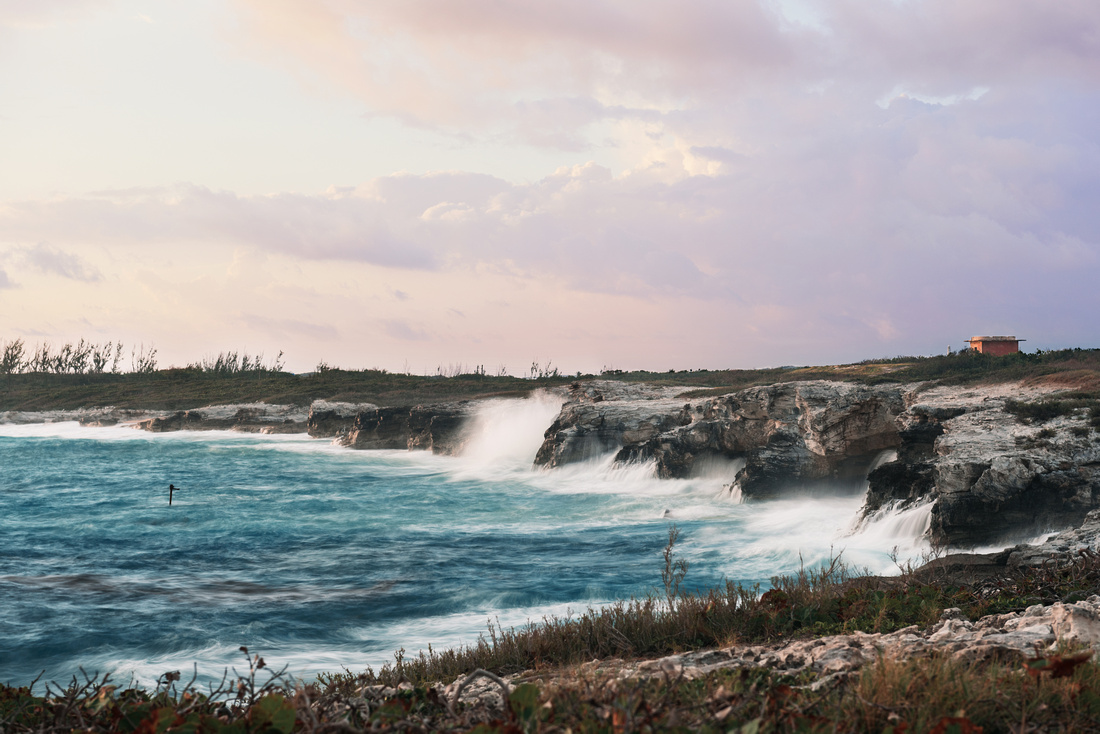 Not wanting to ruin all my gear, I packed up as quickly as I could and started the 20 minute walk back to the Gerace Research Centre.  The rain arrived quicker than expected, within 5 minutes I was caught in a downpour.  Thankfully most of my gear was in my backpack, except for my D750 and Tamron 150-600mm, which got soaked! As I approached Graham’s Harbour the sun broke through the clouds behind me, illuminating the palm trees ahead.  They glowed brilliantly against the dark clouds.  Unfortunately, I didn't capture that moment.

Thoroughly drenched, I arrived back at the GRC.  I used my beach towel to dry off my gear and raced over to the cafeteria for breakfast. It was our first full day on the island, so we did the customary island tour.  As we drove  around San Sal in the back of an old, beat-up truck,  I noticed how blue the water was.  It looked like someone cranked up the saturation way too high, but it was all natural.  As I share photos, I’m sure many will say "it looks fake!"  I can't blame them, I could hardly believe the intense colors myself. 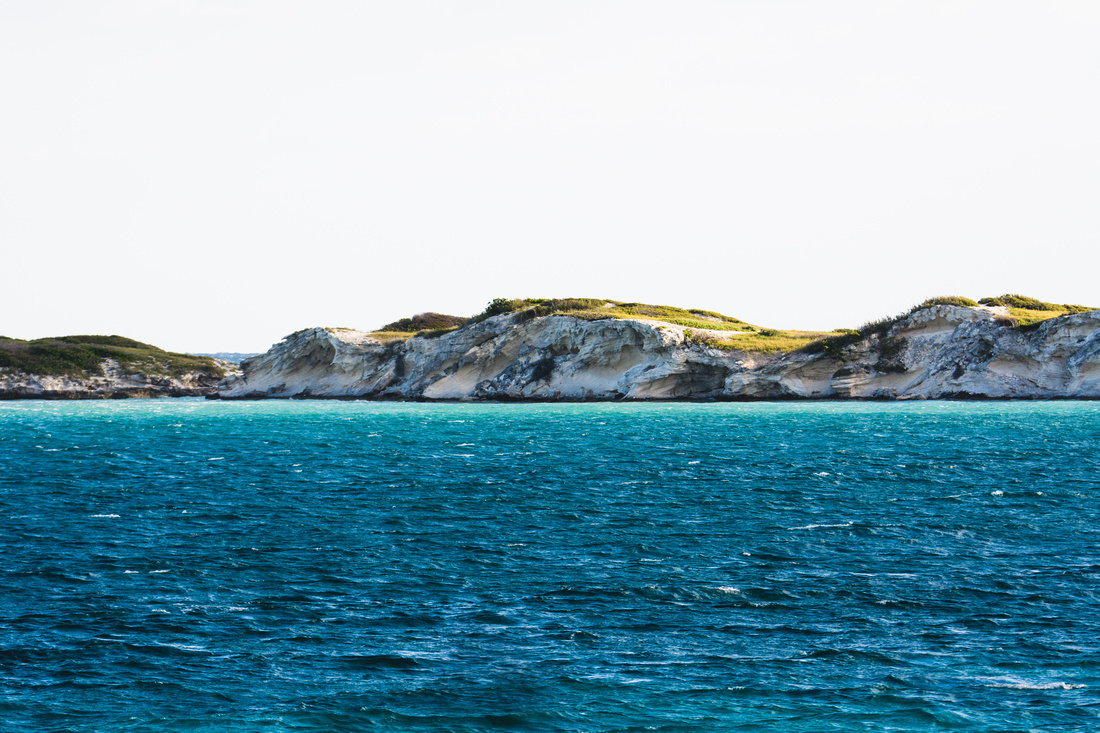 In October 2015 Hurricane Joaquin spent several days pummeling San Salvador.  The island was devastated.  Some areas look like they got hit with a clusterbomb, massive boulders strewn across the landscape with twisted and dead trees.  One area on the southern tip is still impassable, boulders cover the road.  Even now, 6 months later, the island is still rebuilding.  Graham's Harbour perfectly represents this transition. Once a bright and happy place, now a destroyed and lifeless husk. 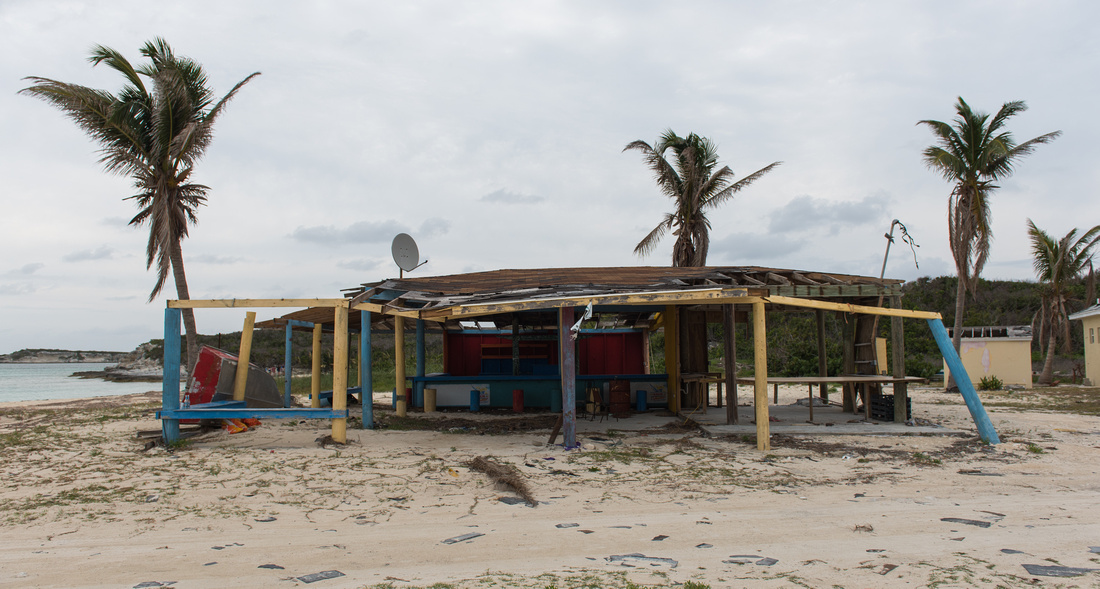 After a long day in the grueling sun, we arrived back at the GRC.  I scarfed down some dinner as fast as I could and ran back to Graham's Harbour to to enjoy the sunset, a big red orb melting over the horizon.  As I walked back to the GRC in the twilight glow, it was as if I had stepped into a memory.  I’ve spent the past year staring at photos I took from the same place and time.  It was a surreal moment and I felt an intense feeling of being Alive.  These moments come very rarely, and last for a few fleeting seconds.  The last time I had this experience was in Dolly Sods in mid-December. 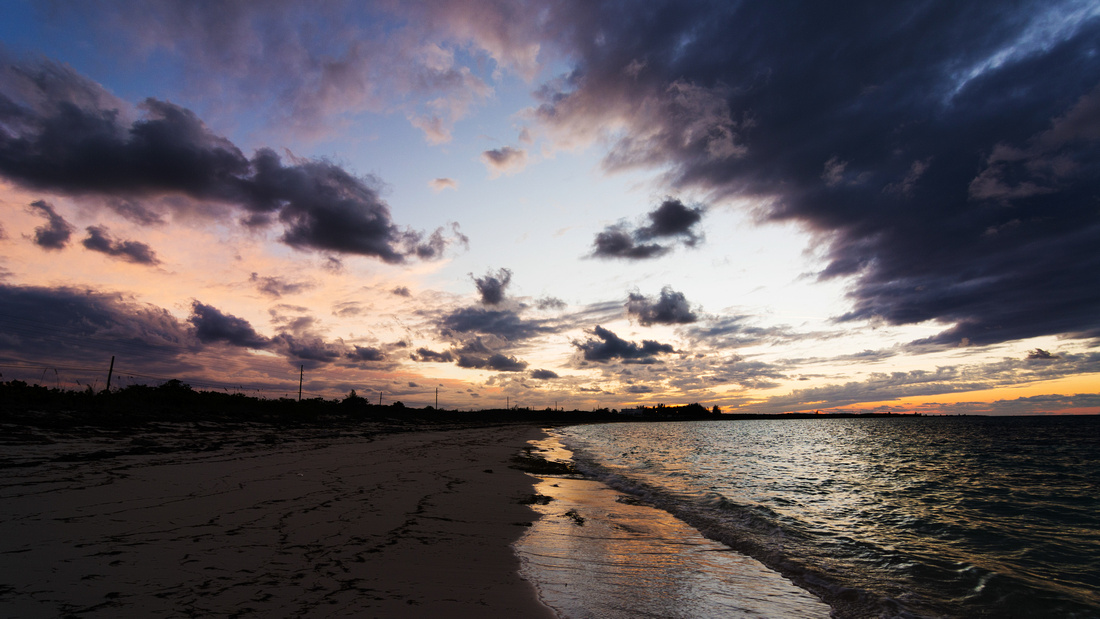 Darkness had fallen on the island once again and the weather forecast looked good for some Milky Way photos.  I decided to sleep from 8pm – 3am, skipping out on a fun night at the "social club".  It was an incredibly windy night, I've never experienced anything like it.  The shrieks of wind sounded like the souls of the damned, howling all night long.  As I moved in and out of consciousness, I felt like I was inside a Lovecraftian horror story. 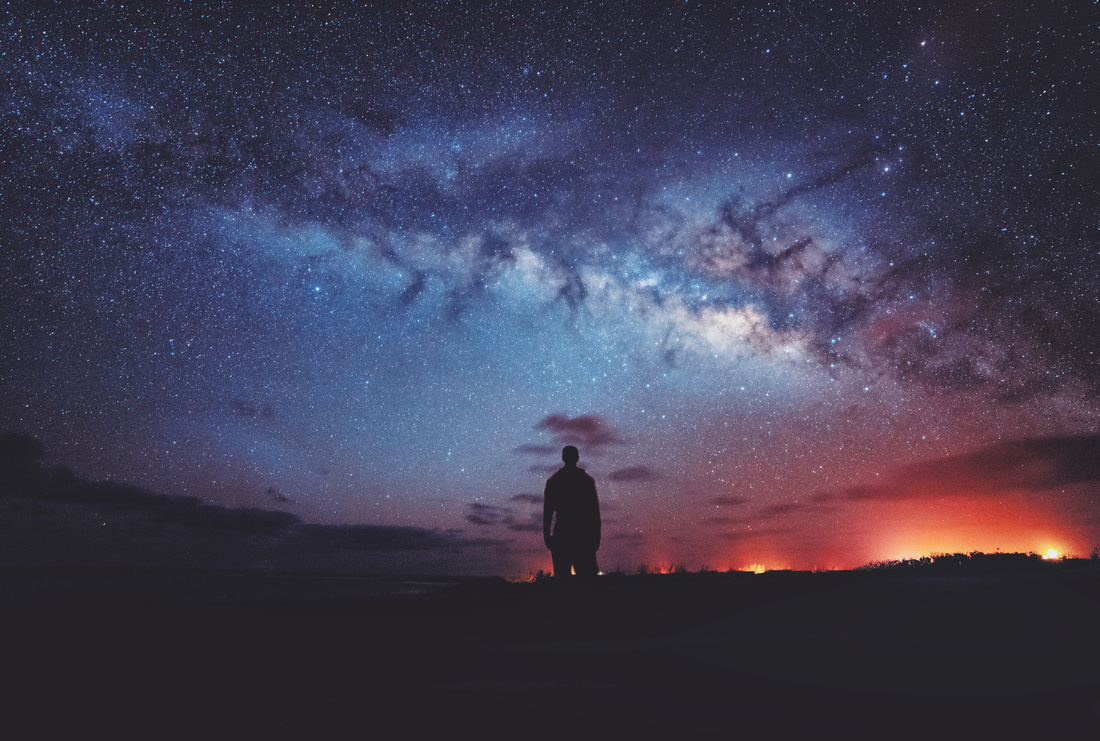 Finally 3am arrived, the wind still shrieking and tearing through the room like an angry ghost.  I grabbed my gear and headed into the darkness to photograph the Milky Way.  Normally Milky Way photos are actually quite easy to capture.  Not this time.  Waves of clouds would blow through every 20 minutes and obscure the Milky Way for about 30 minutes at a time.  I had to be quick and efficient. 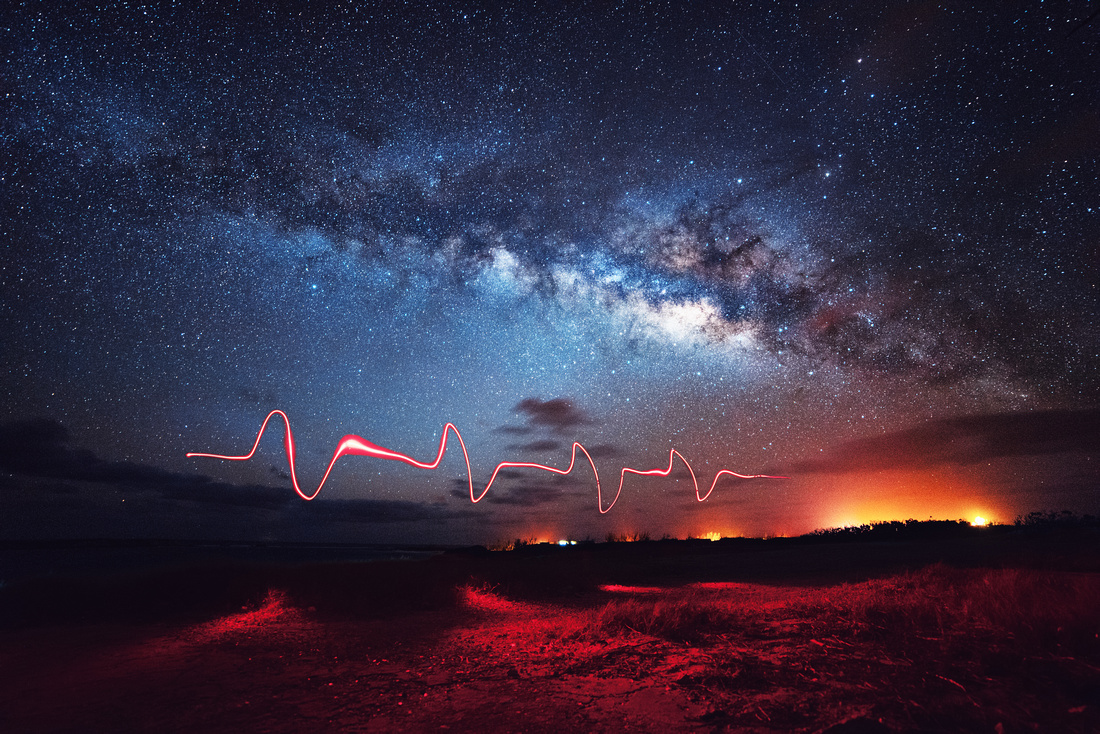 I didn't get anything good at Graham's Harbour, so I decided to move up to North Point once a wave of clouds hit.  I think I may have got a winning shot up there.  Unfortunately another cloud bank moved in before I could get any more good photos.  It was now around 5am, the sun wouldn't be up for over an hour.  I decided to sit and wait for sunrise.  Complete solitude. 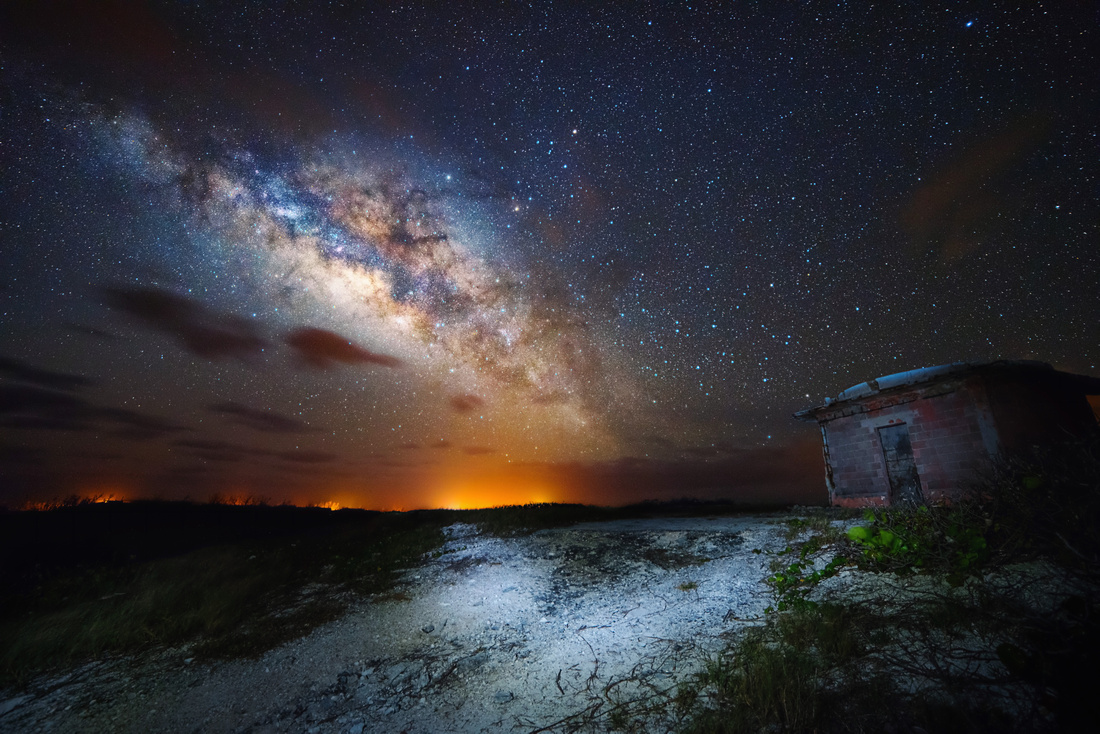 As I was sitting against the observatory, looking out over Rice Bay, I noticed an orange flare in the distance.  I couldn’t make sense of what it was.  Then the clouds parted and revealed a thin, orange Crescent Moon!  As I stared in awe, I thought I saw a UFO moving around.  It turns out it was just Venus.  As the wind flowed around me in the pre-dawn darkness, I wrote this journal entry.

My 24 hour day ended with me sitting in silence, watching as darkness slowly faded into light.  Rays of sunlight are punching through thick clouds and illuminating the distant horizon.  My camera sits beside me, clicking away, as it works on an hour long timelapse.

It's been one hell of a day.

Here's a link to the San Salvador pictures I've completed so far, there will be more to come in the following days.