Autumn in the Adirondacks

Cold, dark, alone.  It's 5:15am and pitch-black outside.  I force myself to crawl outside the warmth and comfort of my sleeping bag and into the dark forest.  My goal for this morning: climb Mount Jo to photograph the sunrise.  The map says the hike should only be about 2 miles from my location to the top of the mountain, with a steep and rocky incline from the base to the summit.  "This should be a piece of cake" 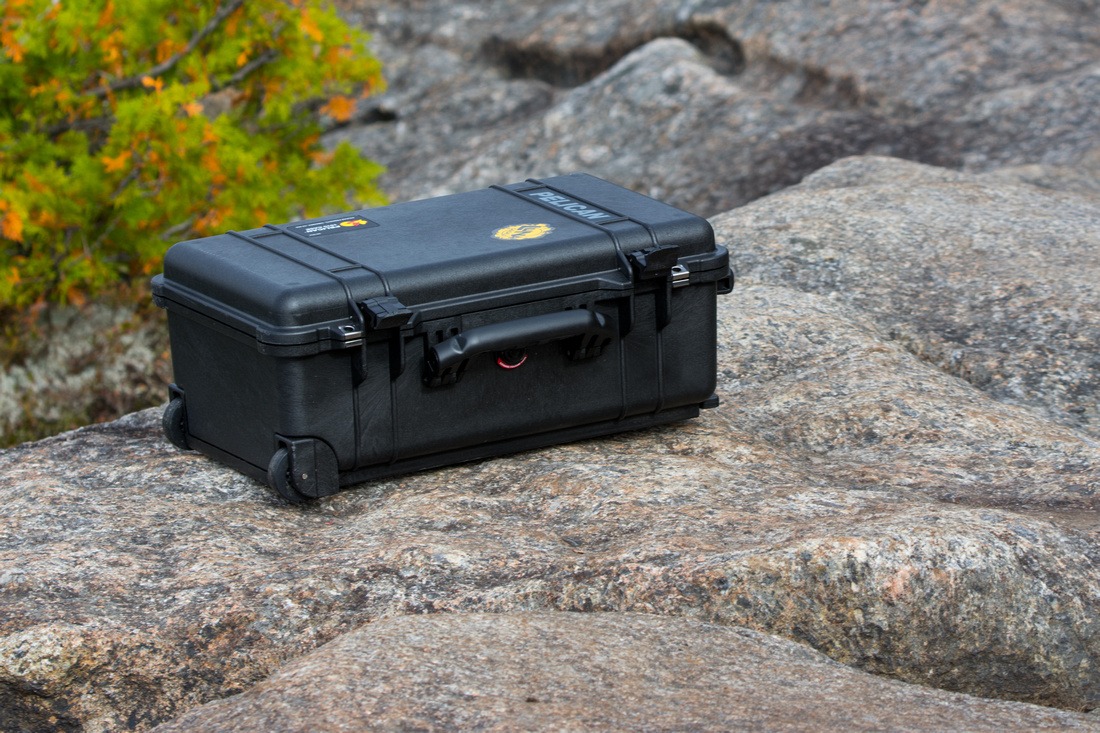 To reach the summit of Mount Jo you have two options, the Long Trail or the Short Trail.  They are both very steep and rugged!  I decided to take the short trail.  Climbing up and over boulders with that case was quite the challenge!  I legitimately thought my heart would explode at any moment from the intense exertion.  The boulders themselves were tricky to navigate and climb, even with both hands free.  After about 45 minutes I was near the summit of Mount Jo, drenched in sweat and exhausted. 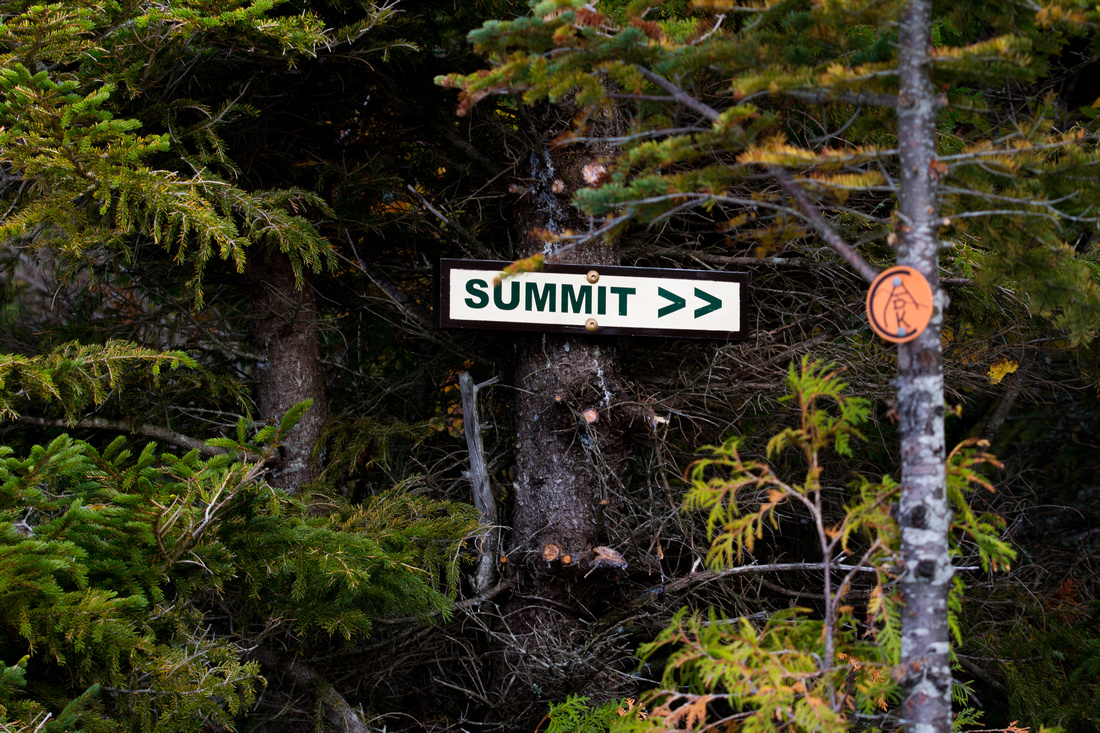 Finally, I reached the rocky outcropping at the very top of the mountain, only to find the view obscured by thick fog.  After waiting roughly 1 hour in the cold, early morning air I decided to clamber back down the mountain in hopes of utilizing the nice morning lighting. 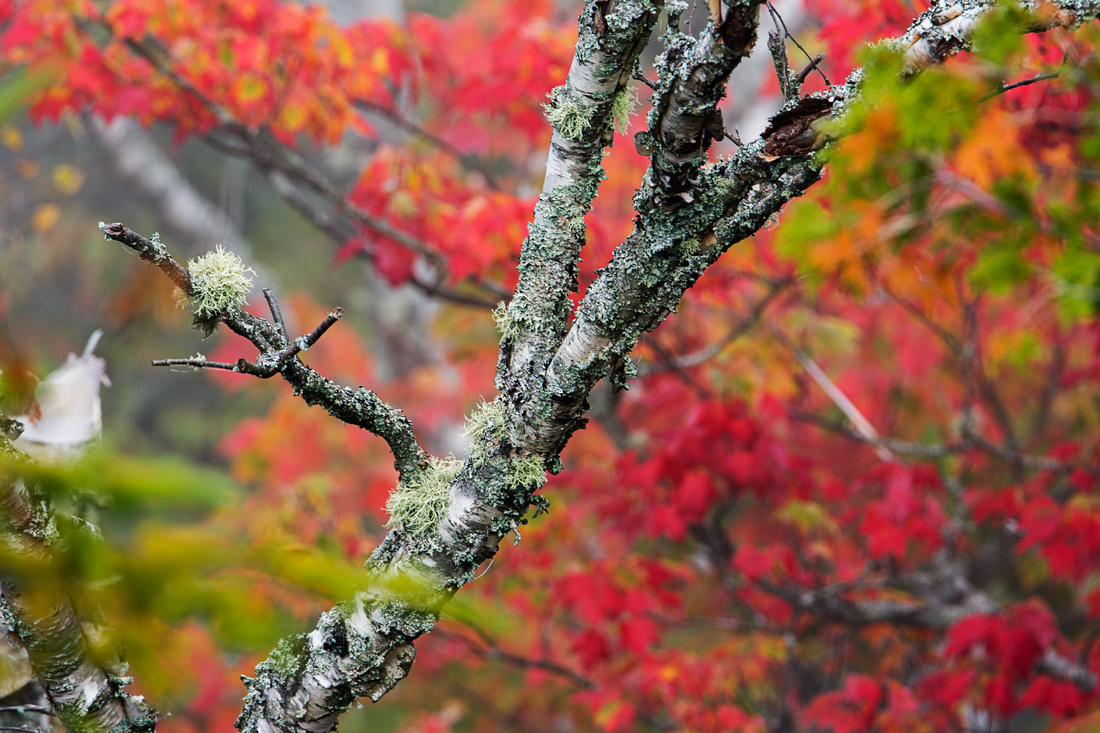 On the way down I followed the Long Trail, thinking it would be a lot less steep and rocky than the Short Trail.  It was not.  The trail basically followed a stream down the side of the mountain.  After carefully making my way down the trail, I eventually arrived back at Heart Lake.

Thankfully the sun was just starting to peak through the low-lying clouds and provide some great lighting!

The fog rising from the lake, combined with the low clouds, provided a nice frame for the beautiful Fall Foliage. 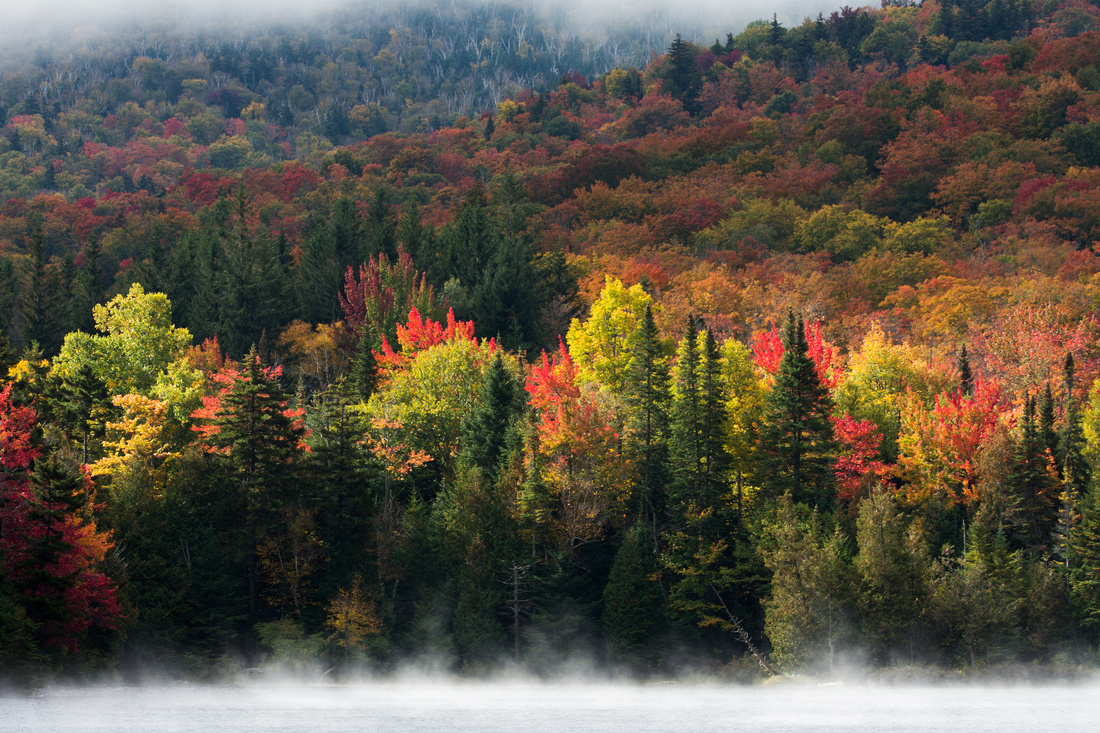 As I was watching the clouds slowly break up, I noticed that the tops of the western mountains were glowing white with frost!  My Tamron 150-600mm lens was used to zoom way in and get some cool shots of the distant frozen landscape. 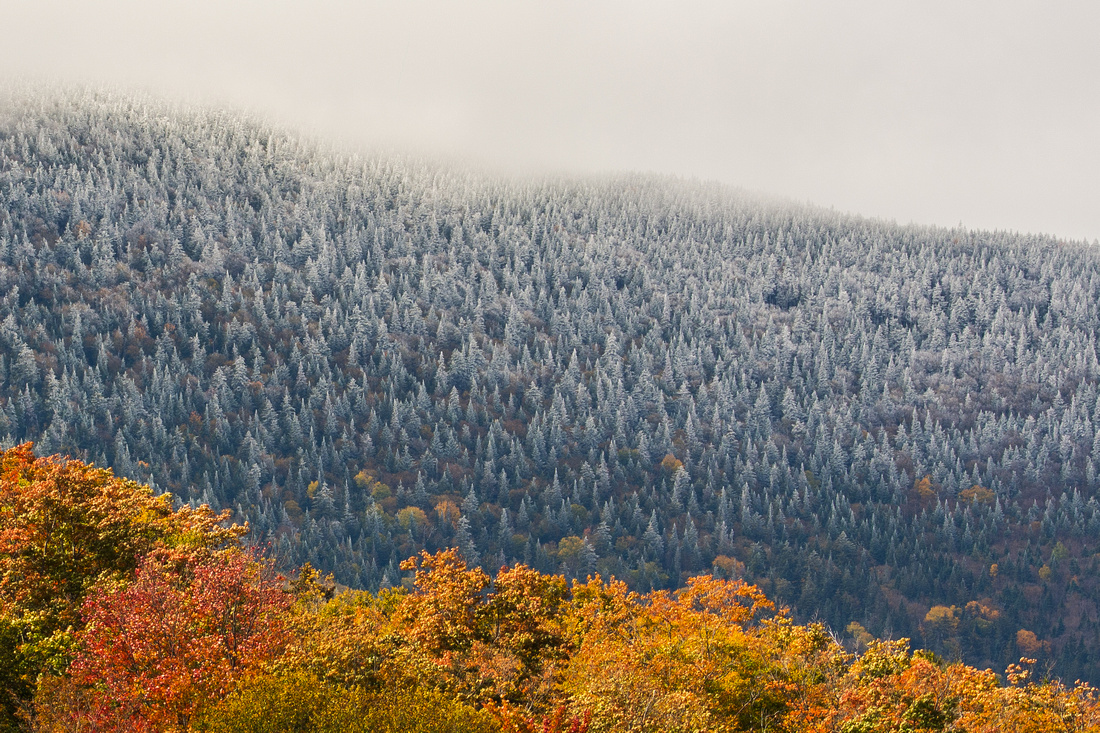 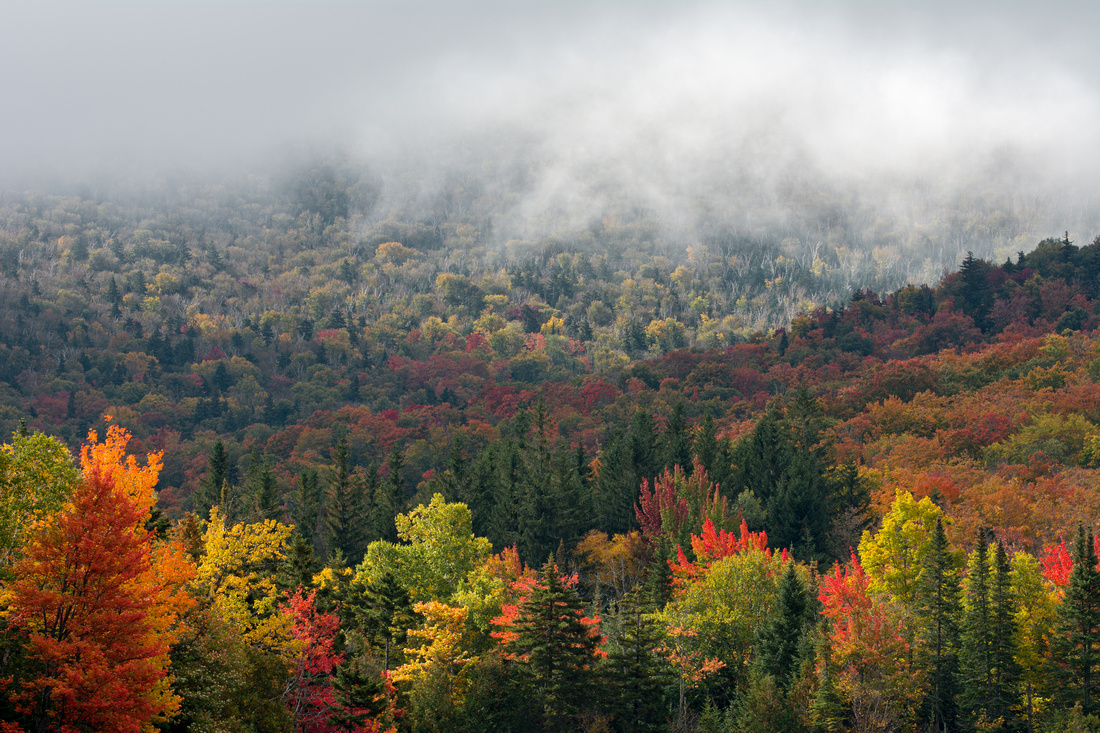 With such a stunning view in front of me, and a bench right there on the beach, I decided to film some timelapse videos.  What a relaxing way to spend a morning!   I made a quick compilation video from this first day's photos and timelapse videos  Check it out over on Youtube!

After shooting at Heart Lake for a few hours I was ready to head back to my base camp and relax for a bit.  However, I was not looking forward to lugging that damn camera case all the way back with me.  Thankfully I got my fastest hitch ever!  Just as I had reached the road and stuck my thumb out, a girl pulled over and offered me a lift.  It turns out she was a seasonal trail builder in the Adirondacks and was based out of a cabin nearby.  She had been working the park all summer and was nearing the end of her time in the Adirondacks.  One thing I love about hitching is the interesting and wonderful people you meet!

Once I arrived back at my tent and car, I had a little lunch and decided to explore the area for a bit.

After a nice walk through the forest, I arrived back at base camp just in time to pack up my gear again and head back to Mount Jo for a sunset shoot.  Having learned from my earlier mistakes, I carried only a few lenses and one camera body.  With my lightened load I headed through the forest with a new spring in my step.  Taking the Short Trail again, I was amazed how easy it was this time!  Upon arriving at the summit, I saw a breathtaking view: mountains and unbroken forest as far as the eye could see in every direction!  It was incredibly relaxing to watch the light slowly rise up the mountains, as the sun began to set. 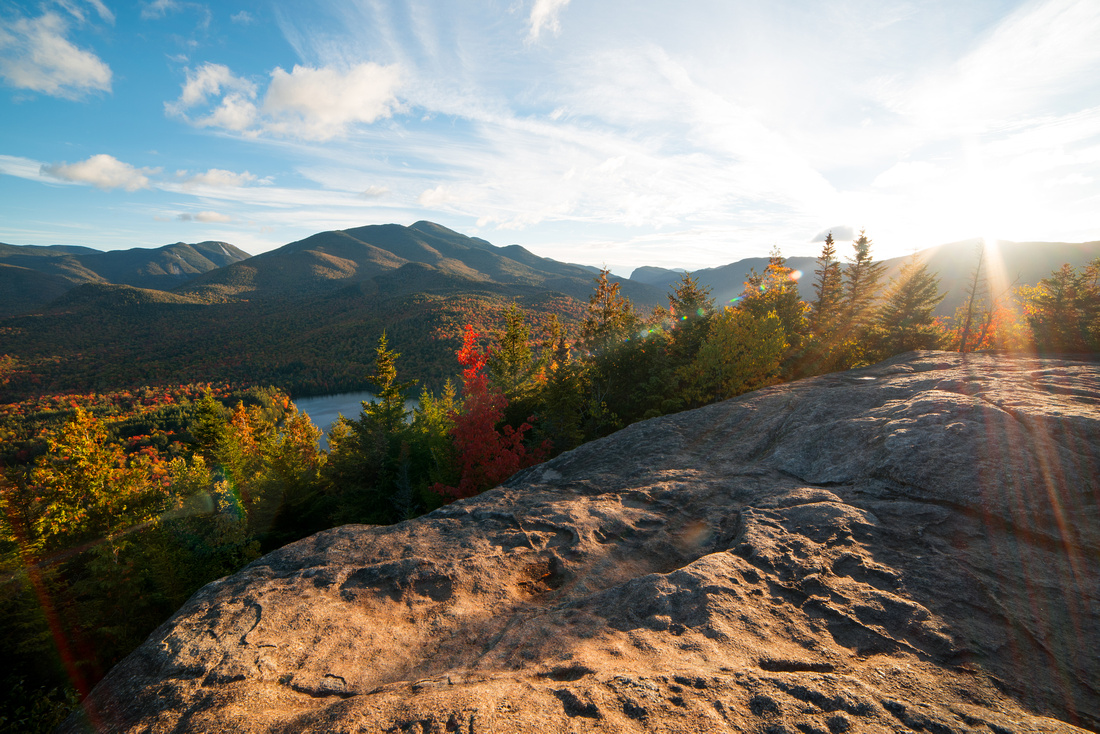 It was another cold morning, and I had another mountain to climb for a sunrise vista.  Today I was headed for Mount VanHoevenberg, where the bobsledders raced in the 1932 and 1980 Winter Olympics.  Unfortunately my map was of little use, as the mountain was covered in crisscrossing Ski trails.  I made my way up the twisting ski trails, slowly gaining elevation and moving in the general right direction.  Thankfully, I am really good with navigating and I managed to keep selecting the right trails to follow.  Eventually I made it out of the forest and into a clearing, where I saw the top of the Bobsledding track.  The view was wonderful! I was able to see the distant landscape stretching out past Lake Placid. 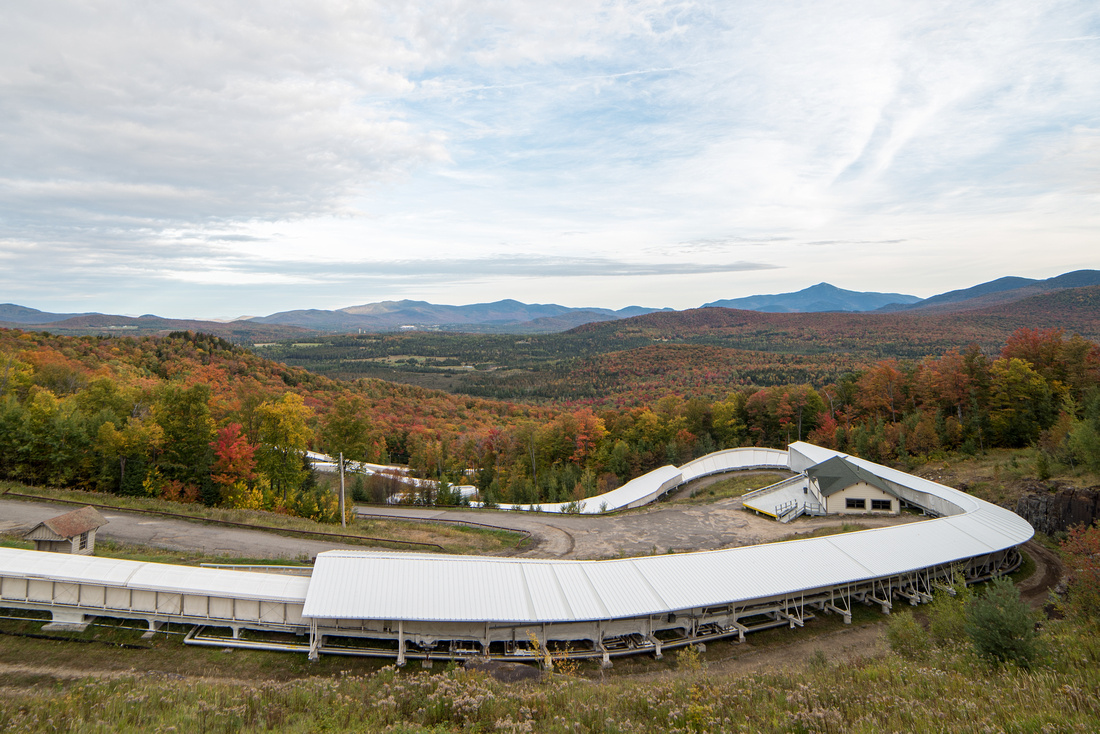 After cooling off for a bit and enjoying the view, I continued my push to the summit.  After a relatively steep, wet hike through the forest I finally arrived at a rocky outcropping.  Before me was an endless sea of trees and mountains. 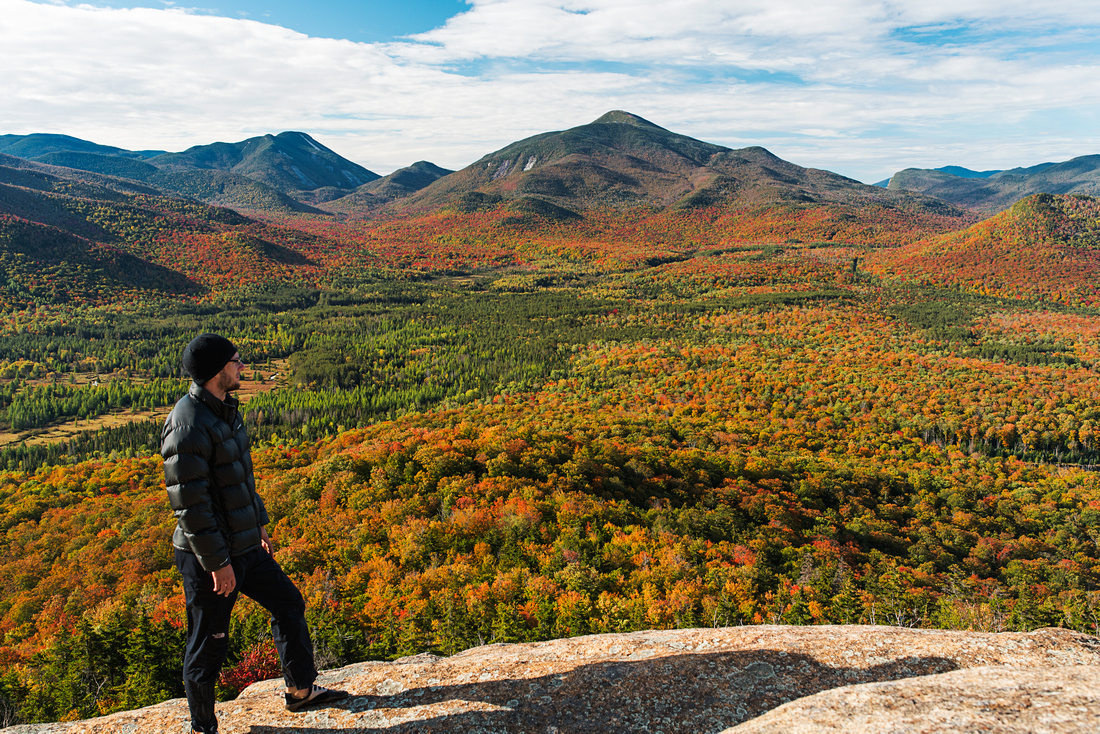 Using my 150-600mm lens, I had a lot of fun zooming way in on the distant trees and landmarks.  It sucks having to lug this lens on steep and long hikes, but I never regret it!  The images I am able to capture with this lens are always unique. 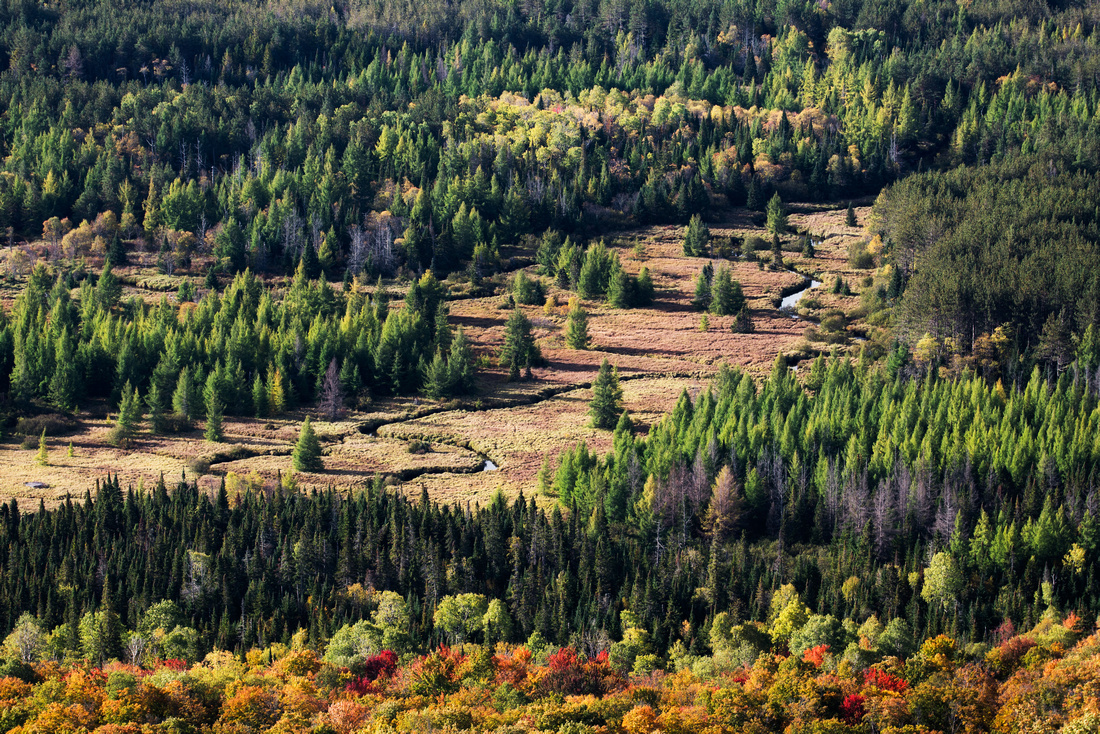 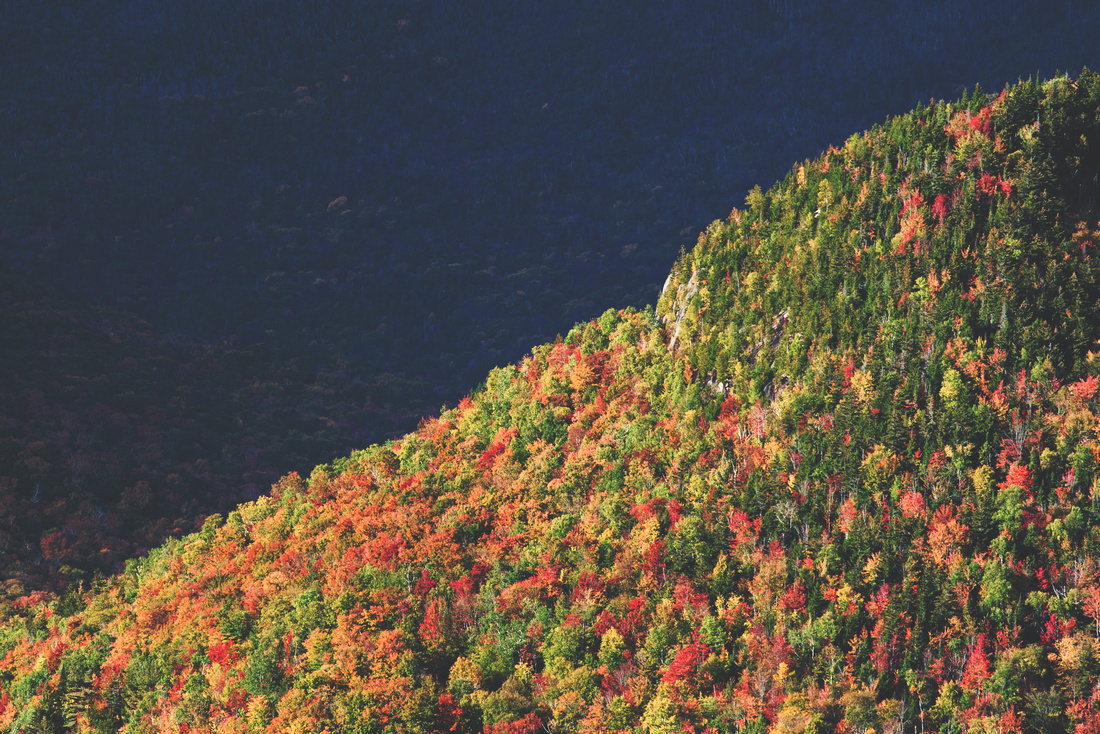 Eventually a friendly New York couple joined me on the overlook, they lived in the area and were avid hikers.  They were in the process of climbing to the top of all 46 major peaks in the Adirondacks, in hopes of earning the 46er title.  They also mentioned that there was an Oktoberfest nearby, on top of Mount Whiteface.  I suddenly realized how dehydrated and hungry I had gotten (I was in such a rush to get to the mountain I left my food and water in the car).  I decided to make this Oktoberfest my next destination.

On my way down the mountain I followed the Bobsled course, which was pretty neat.  The bobsleds were running that morning, every so often I'd hear one shoot past me down the track.  As I was descending the mountain the song "Comfortably Numb" by Pink Floyd came on.  It was one of those surreal moments in life.  I have a gorgeous mountain view ahead of me, with the guitar solo blaring out of the loudspeakers.  For a moment life was perfect and I had become Comfortably Numb.

After an exhausting morning I arrived back at my car around noon.  I ate some donuts from White House, a slice of cold pizza, and a liter of water.  Now I needed to figure out how to get to Mount Whiteface for the Oktoberfest.

While I was headed to Mount Whiteface, I saw tons of beautiful areas to pull over and enjoy the Adirondacks.  Of course, I had to stop for at least a few of these.  One location was along a stream, which let me test out my new Polarizer.  A Polarizer will remove the reflections from water (or any surface really) and give much more vibrant colors and remove harsh glare. 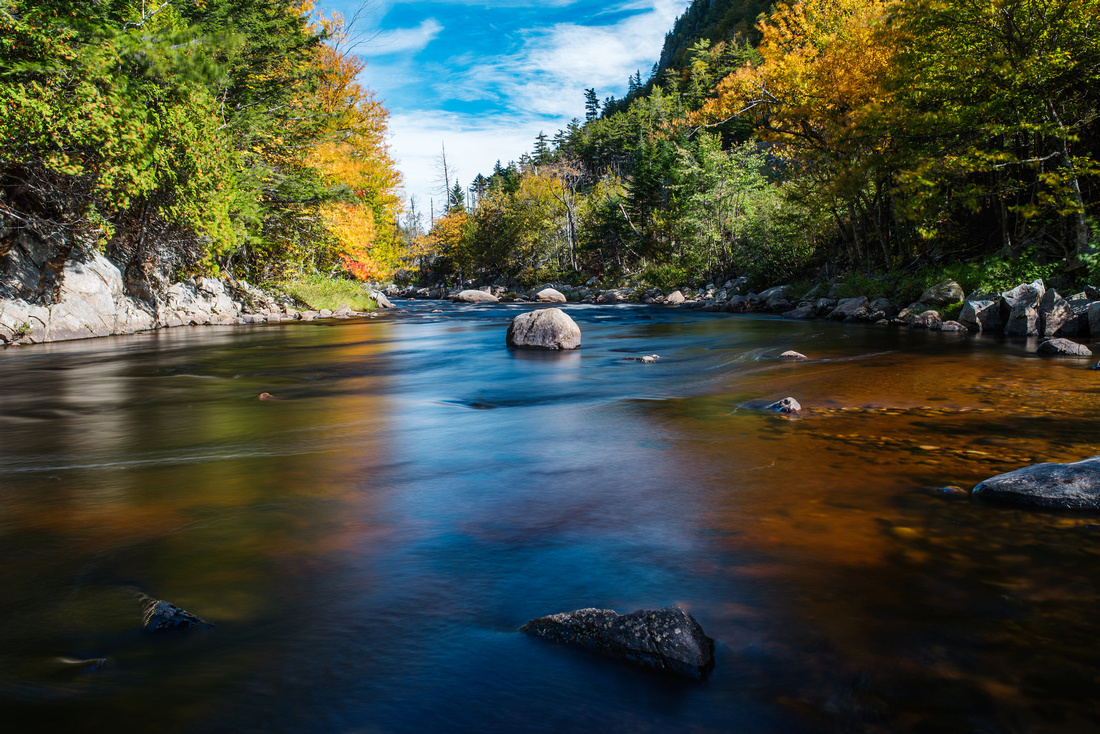 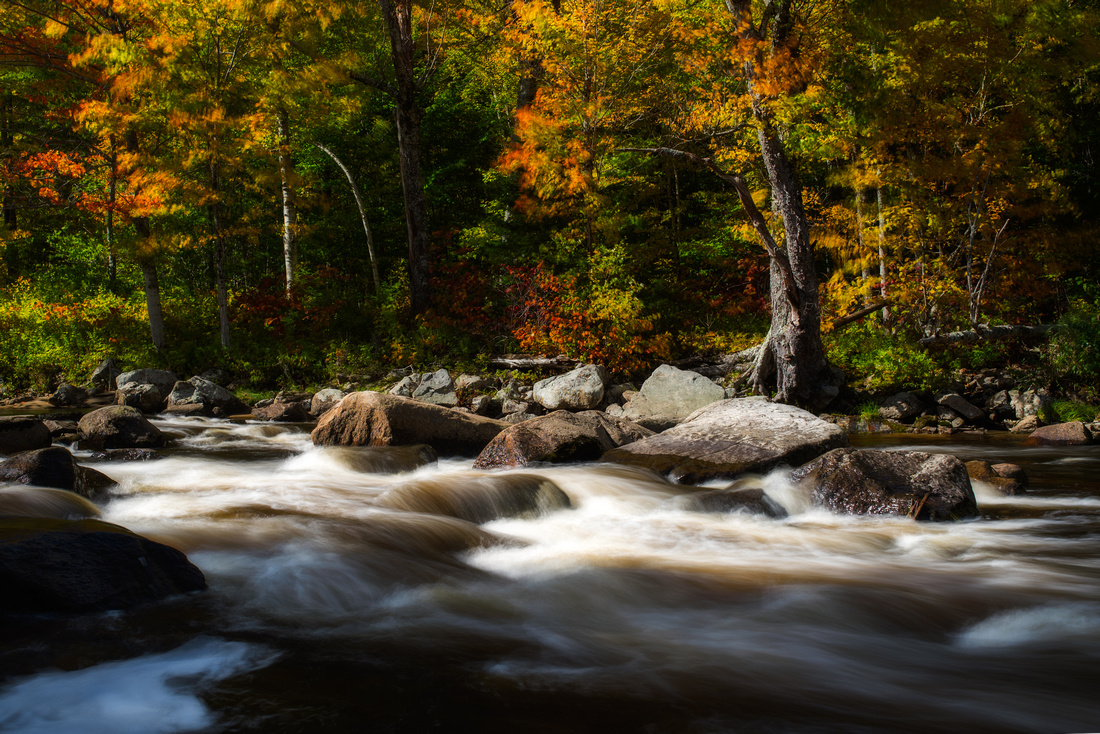 Eventually I arrived at the base of Mount Whiteface, there's a road you can drive up to get to the summit.  This drive reminded me a lot of my time out West, especially on Trail Ridge Road and Going to the Sun Road. 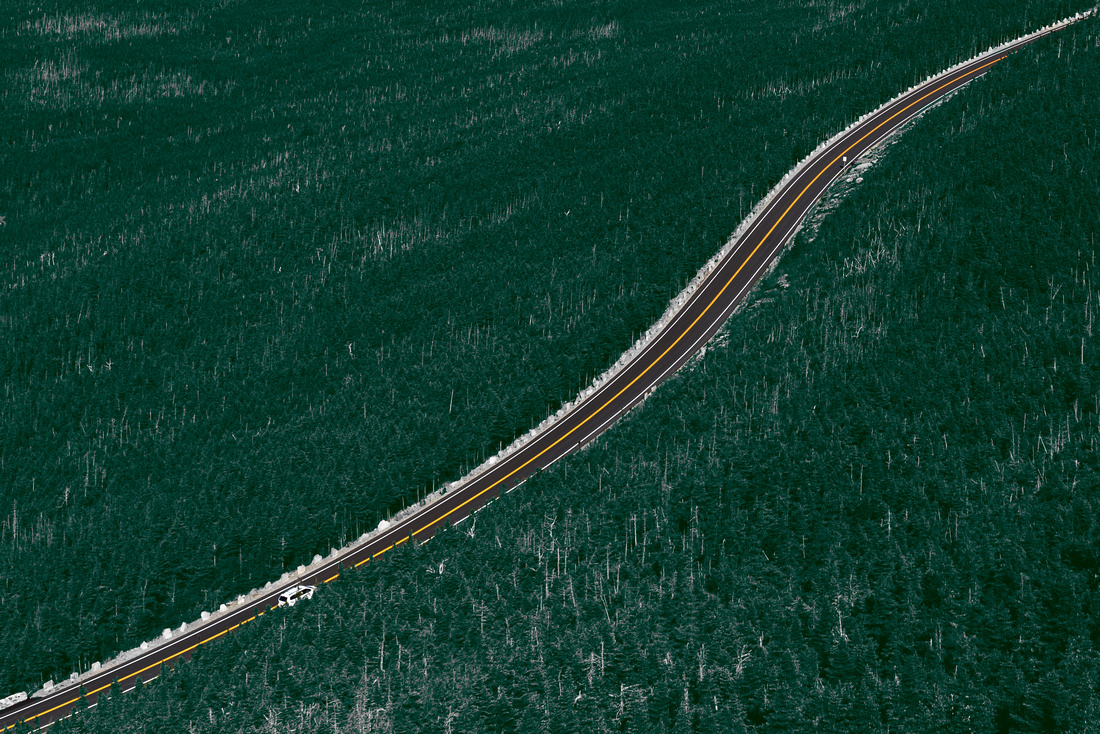 At the summit there is an old castle you can go inside, and a steep, slick, rocky trail that leads to the very top of the mountain.  The view up there is spectacular, you can see for dozens of miles in every direction. 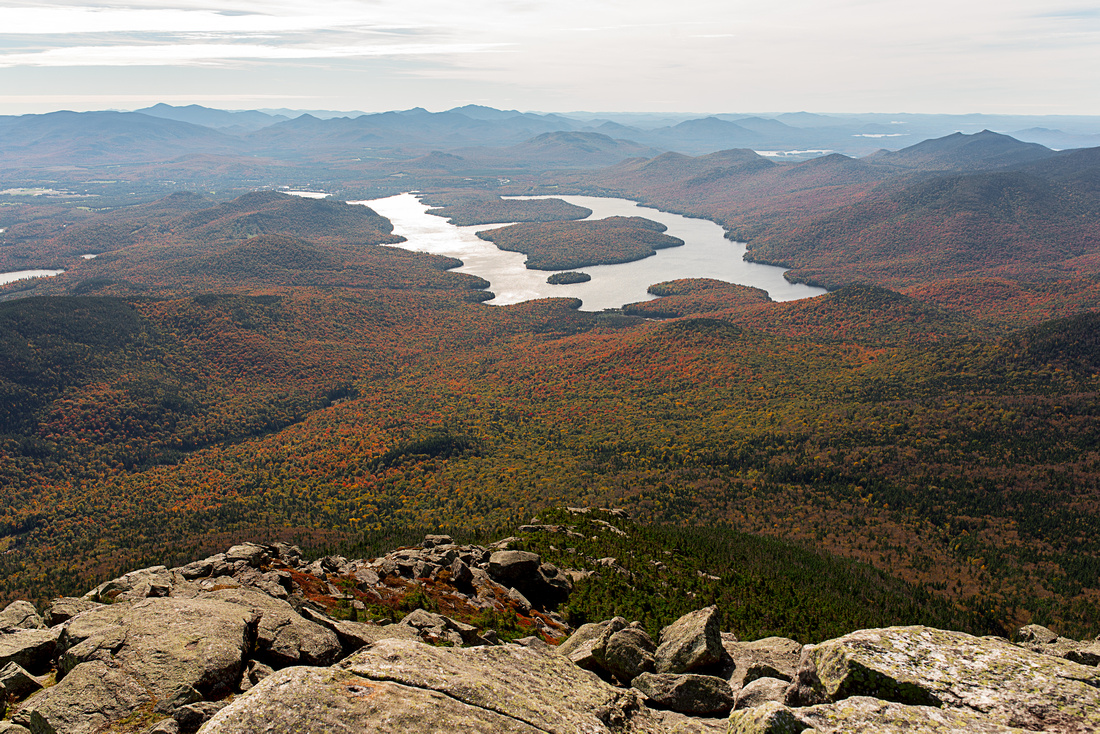 With 2 mountains conquered before 3pm I was so looking forward to this Oktoberfest.  Unfortunately I was at the wrong location!!  Apparently the Oktoberfest was at the base of the mountain, not the top.  Time was running out, so I got back to my car and drove all the way back down the mountain to the WhiteFace Ski Resort.  Having spent the past 24 hours isolated in the mountains, the ski resort was a welcome change.  The Oktoberfest was still going strong when I arrived around 4.  I stuffed my face with some good German food and had a couple beers to wash it all down.  As I was walking around the festival I saw 2 owls, one of my personal highlights of the trip! 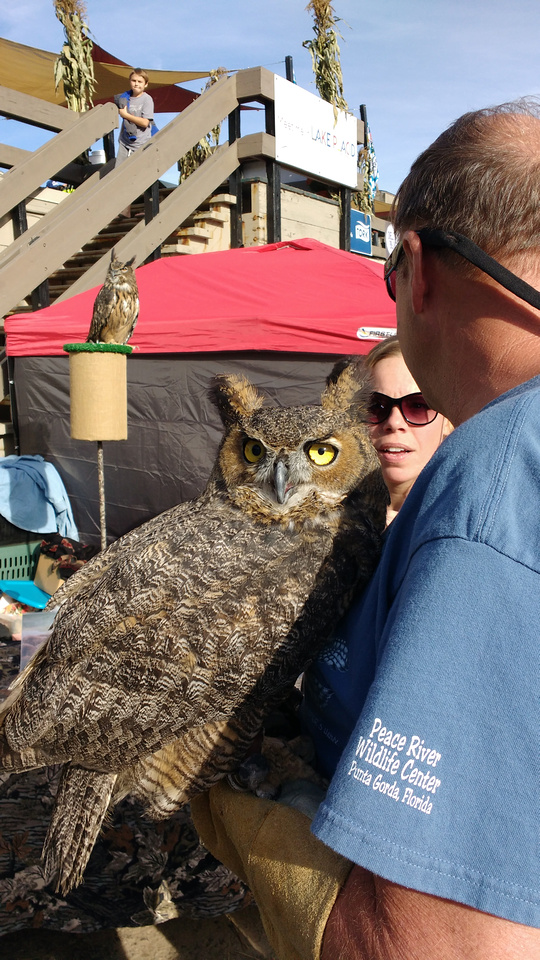 With my stomach finally full, I was ready to begin the final leg of my trip.  I knew I wanted to be at Elk Lake for sunrise the next morning, but I had no idea where I was going to spend the night.  I ultimately decided to just start driving down towards Elk Lake and stop when I found a suitable Hostel or campsite.  I never did.

Around dusk I arrived at Elk Lake, a pristine backcountry spot.  There is an old lodge there, dating back to the 1800's, where visitors can enjoy the backcountry in luxury.  But I'm way too cheap for that!  I ended up sleeping in my car that night, but not before I took over 300 photos of the night sky. 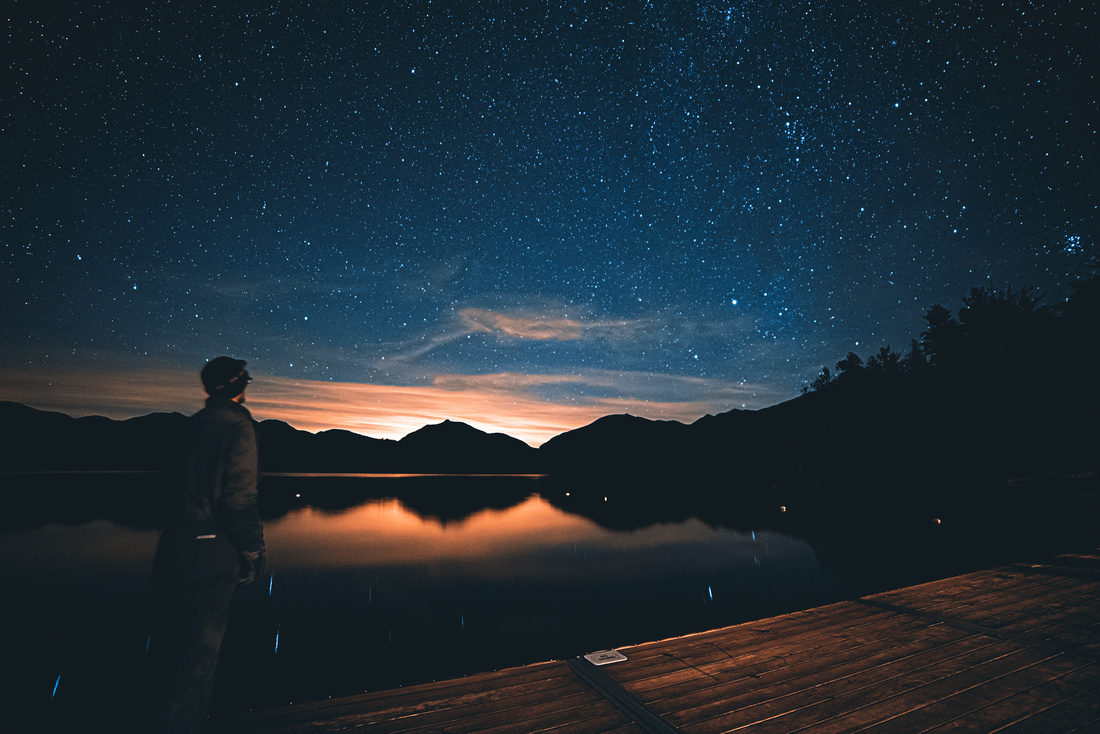 There was a dock that I ended up sitting on for a couple hours, watching the stars twinkle in the sky.  All of the dew around me slowly started to freeze in the cold Autumn air.  By the time I got up from my seat, everything around me had frozen.  With my camera finally done taking photos for a timelapse, I looked forlornly into the warm, cozy Elk Lake Lodge, then trudged back to my car.

The next morning was frigid!  Even though the car was cramped and uncomfortable, I didn't want to venture out into the cold air.  After about 20 minutes I finally worked up the courage to leave the car.  It was a peaceful sunrise along the shores of Elk Lake, a lone kayaker was on the water.  Apparently he had been out there at first light!  Once I had captured some nice photos of the lake, I was ready to begin the long drive home.  Driving through the Adirondacks in the Fall was easily one of my favorite outdoor experiences! 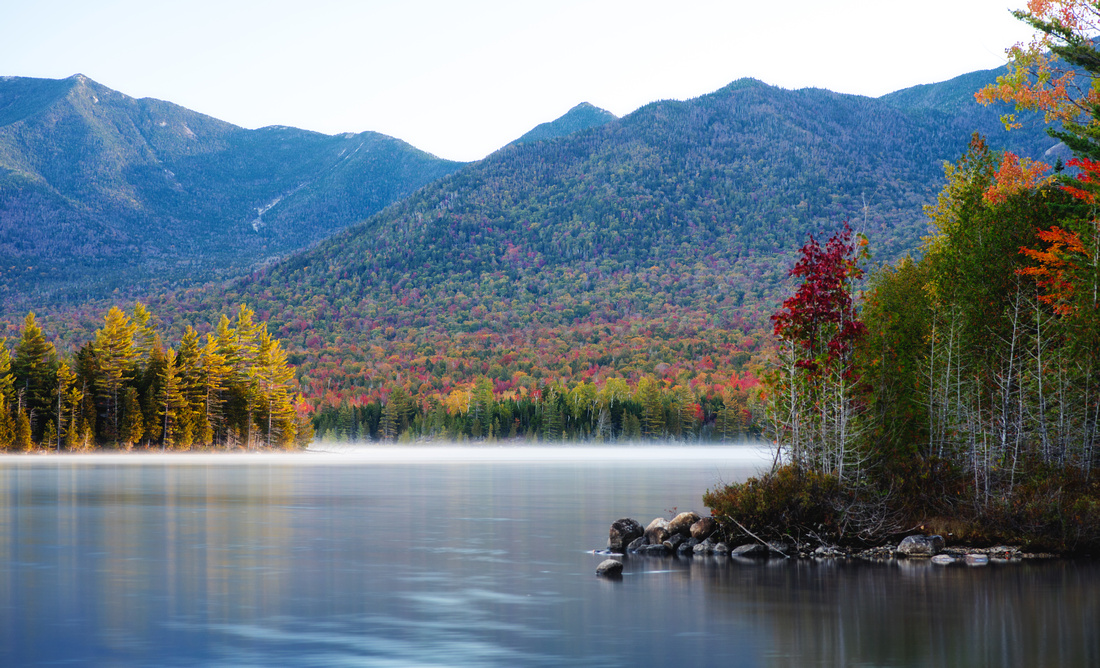 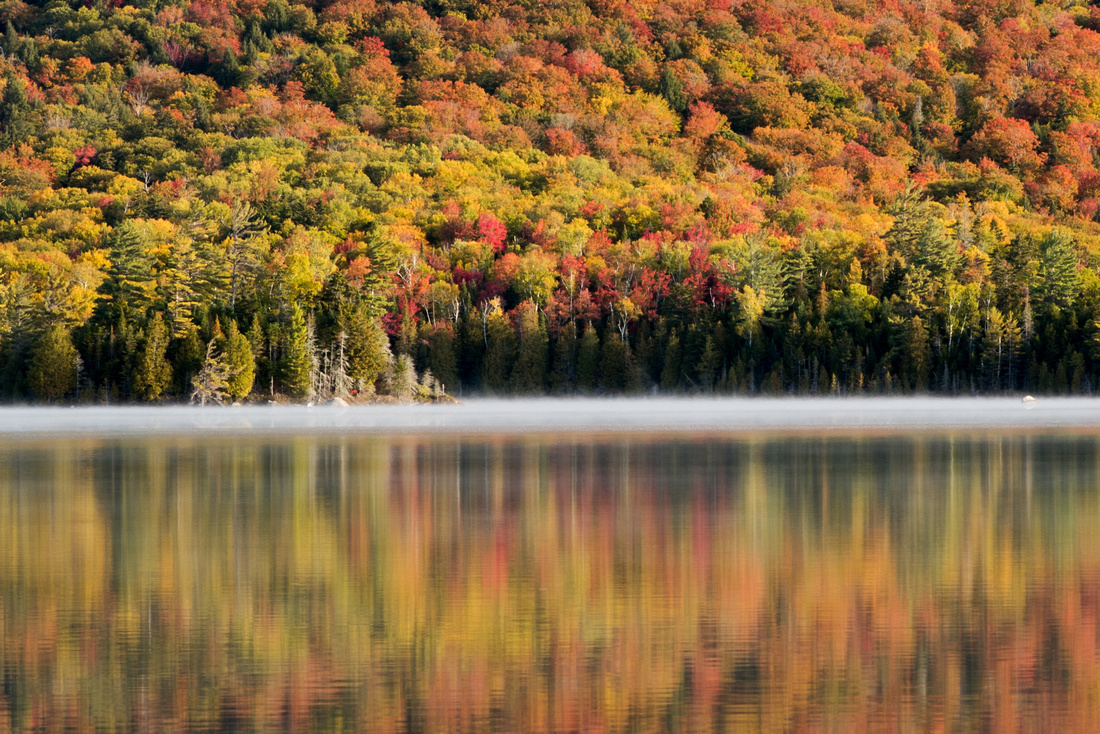 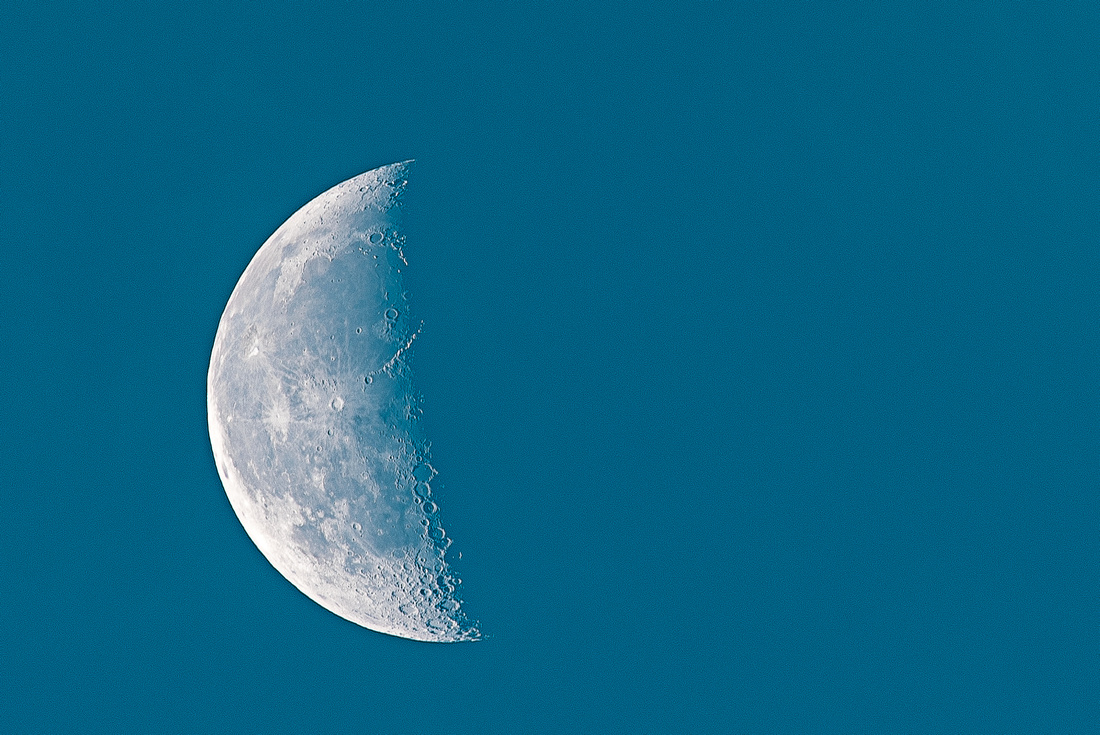 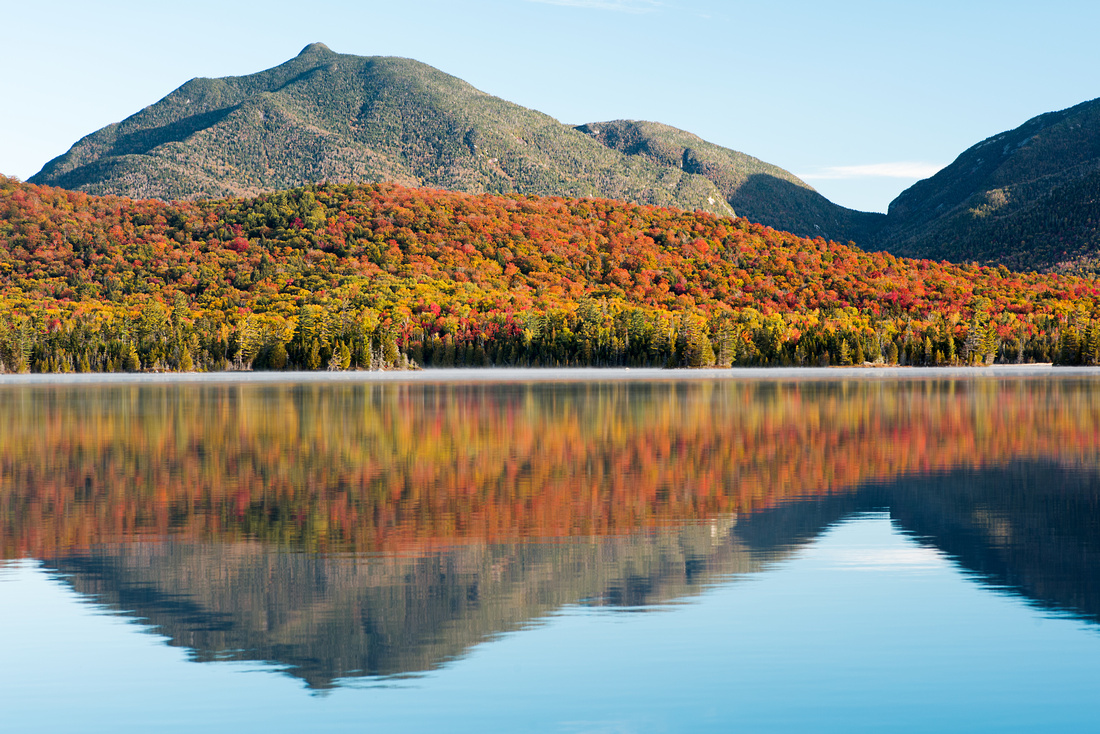 To see all of the photos from my Adirondack trip, click here!